TV is filled with shows about monsters and aliens. Call them "Finding Gullible," but they fill a real, curious need 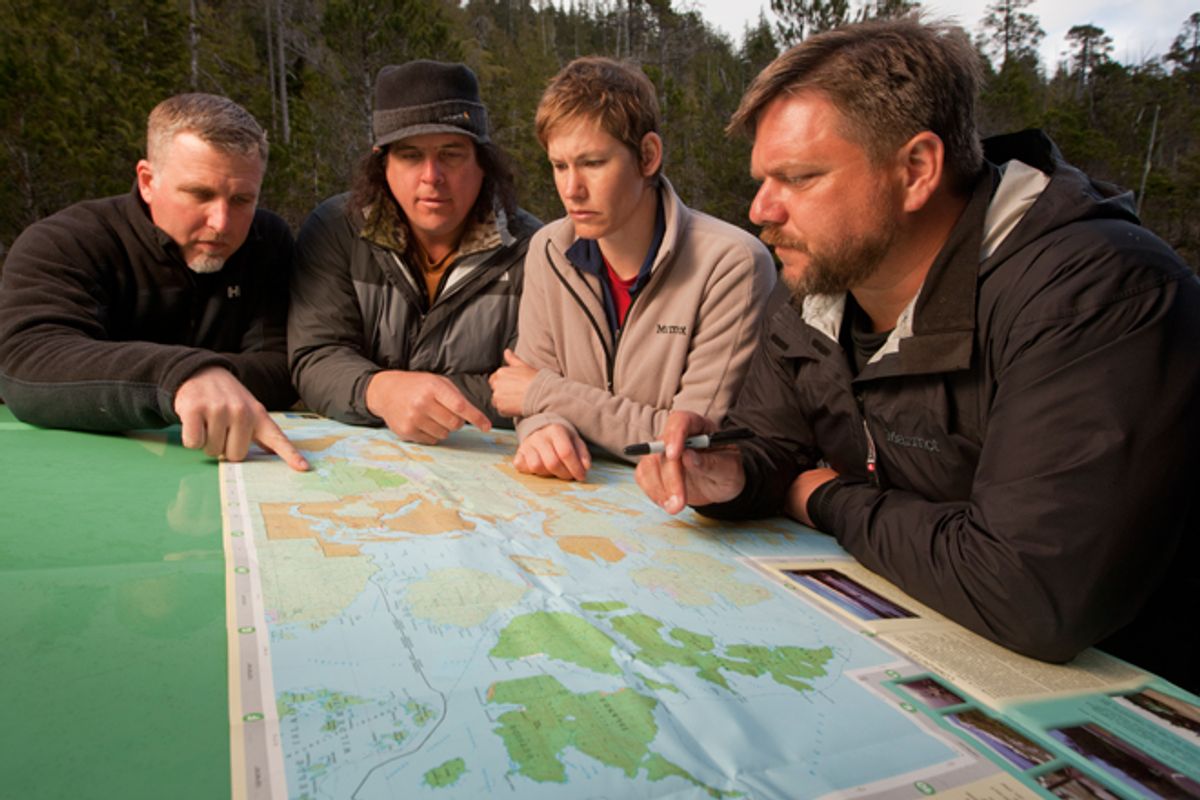 All across cable television, earnest man-boys are frenetically hunting Bigfoot, ghosts and lake monsters -- when they aren’t investigating UFOs and alien abduction. The past several years have seen such an onslaught of these paranormal programs that one wonders what took cable so long to barrage our species’ soft spot for the fantastical and absurd. In the mid-1990s Leonard Nimoy narrated the relatively tame A&E series “Ancient Mysteries,” a show spawned from the success of the series “In Search Of” that ran from 1976 to 1982. Both programs offered the standard fare of sasquatches and flying saucers, poltergeists and voodoo priestesses, as well as the occasional episode that transgressed against the OED’s opinion of “mystery” — killer bees, hurricanes, tidal waves — because, let’s face it, there really aren’t that many unexplained phenomena anymore. In 2003 a show named “Unexplained Mysteries” aired for a single season, and the only actual mystery was how anyone could have allowed such a flagrant redundancy for a title.

Part of what makes modernity so much safer and saner than the Middle Ages is the noble function of science to unshackle us from superstition and hocus-pocus of every stripe. And yet it appears a goodly number of us prefer those shackles to rationality and fact because they’re simply more titillating, because some lives grow lame if they lose the possibility of communion with forces outside the norm. Harold Bloom has written that “it is hard to go on living without some hope of encountering the extraordinary,” and so outfits such as Animal Planet and National Geographic Channel have given a platform to jejune dreamers who refuse to have a hard time living, who transform hope for the extraordinary into unintended burlesque and cash for their CEO shepherds. Ours is a culture that doesn’t mind swiping credit cards for malarkey.

“Finding Bigfoot” on Animal Planet is currently filming its third season, an enigma, indeed, considering the robust inanity of this program, an inanity so pronounced -- and of which its participants are so proudly oblivious -- that the minds at “South Park” felt compelled to skewer it. (If you’re getting skewered on “South Park,” you probably deserve it.) The four-person team of Bigfoot hunters consists of three men with sketchy credentials — Matt Moneymaker, founder of the Bigfoot Field Researchers Organization; Cliff Barackman, who pretends to be “level-headed and analytical”; and James “Bobo” Fay, a gargantuan, hirsute human specimen who’s as close as you’ll ever get to seeing Sasquatch — and the obligatory “science-minded” female, Ranae Holland. They scamper through various wooded environs wearing irksome green night-vision equipment, declaring every twig snap an indication of an ambling “squatch.” They hold impotent and yawnful invigilations. They howl in petition of a return howl that never comes. They interview backwoods dwellers and look upon them with arrant credulity as these unknowing folk describe a bear they believe is Bigfoot. Each one of these monster hunters gives off a medium-strength air of having been picked on psychopathically as a teenager.

The new series “Chasing UFOs” on National Geographic Channel has to follow the same blueprint as “Finding Bigfoot” because there’s no other blueprint to follow. The three-person team — two men, one woman — scurries around open areas with fancy green cameras and scans the skies for not-quite-inexplicable lights they of course deem of alien origin. They meet with citizens convinced of their own sightings — ignoring every shard of data that proves the rampant unreliability of eyewitness testimony — and then talk to marginalized farmers certain that little gray men are mutilating their great big cows. Savvier than the suits at Animal Planet, the suits at National Geographic Channel have hired a prickly female team member with supercharged sex appeal, Erin Ryder — even her name is sexy. Peek at her photo on the show’s website and you’ll see her perky teats at attention, chest aglisten, hair blown back in glam. Each team member dons faux military garb — a signal of their steely seriousness — and the two gents, James Fox and Ben McGee, are half likable and not awful to look at. The “Finding Bigfoot” bunch, on the other hand, are both agony on the eyes and outrageously asinine.

These programs, like their learning-disabled sibling “Ghost Hunters” on Syfy, are all mediocre intercourse and no orgasm. Feeling truly satisfied by an episode would be contingent upon the capture of E.T. or Sasquatch or Casper, or upon a rigorous presentation of irrefragable evidence of their existence, and neither is possible. Both “Finding Bigfoot” and “Chasing UFOs” boast companion play-along Web pages, which unintentionally hint at the substance of the shows: It’s all play. The comments on the “Finding Bigfoot” website indicate that roughly half of the viewers are gleefully appalled by the program’s stupidity — “This show should be called Finding Morons!” — and yet it wouldn’t be heading into its third season if it didn’t tap into a very real curiosity, an authentic want at the hub of us.

In a novel called "Busy Monsters," I ridiculed Sasquatch hunters, ghost chasers and alleged alien abductees, and was pleased when I received hostile missives from supporters of the paranormal who felt offended by these satiric portrayals. If a novelist isn’t offending someone he isn’t writing honestly enough. This anti-fan mail confirmed for me the irrational religious fervor with which believers invest in their darling aliens and sprites, because only insecure individuals religiously devoted to nonsense look to be insulted at every turn. You can’t insult a geneticist by mocking the double helix. She might pause to laugh at you or perhaps lament the woeful public education apparatus that turned you so doltish, but she won’t be insulted and anyway doesn’t have time to scribble you hate mail.

During my first year of high school I had a beautifully cynical Englishman for a science teacher, Mr. Foster, who replied to my question about UFOs with a droll sentence I’ve never forgotten: “If they’re smart enough to get here they’re not dumb enough to be seen by you, much less crash in New Mexico, whose terrain strikes me as perfectly navigable.” When I informed him that aliens are abducting us for test purposes, he said, “You aren’t that special, my dear.” That cuts to the uncomplicated core of the issue, does it not? Take a look at those who claim to have been bodily hijacked by oval-headed spacemen: They are the ostracized and neglected, the unfit and lonesome, those hapless outcasts who can’t get a date. How special, how unique, how worthy they must really be if aliens traipsed a trillion light-years to beam them up and insert objects into their anuses.

The tremendous success of “The X-Files” from 1993 to 2002 both confirmed our ceaseless interest in the otherworldly and disseminated on a mass scale these new versions of old myths. The motifs were the same but the faces had changed as technology advanced: not angels but aliens; not luminance from heaven but lights from UFOs. When the old gods don’t work anymore we make new ones, or, as G.K. Chesterton has it, “When people stop believing in God, they don’t believe in nothing — they believe in anything.” One way or another we will have the sublime. The UFO phenomenon is mytho-religious both in its very narrative fabric and in the quasi-heroic quest for transcendence that believers embark upon.

If you’ve ever viewed the famous Patterson footage of Bigfoot you might understand how someone might develop a religious devotion to its capture. Filmed by Roger Patterson in 1967 in Bluff Creek, Calif., the 50-second footage shows a female Sasquatch striding away from the camera in a decidedly non-human gait. And then the creepy, gorilla-like turn of her shoulders and head to glance at the camera. Sitting crossed-legged on the carpet as a child, transfixed by this footage on our television, I felt a literal shiver move through me. That was no gagster in a monkey getup, and it meant that monsters were real, that existence was magical, an occultist’s thrilling playground. The memory of that emotion has never waned in me: ecstatic with the possibility of extraordinary events, excited by mystery and surprise, vivified by the unknown. My Catholic education at the hands of Latin-speaking nuns never inspired those feelings of awe.

It didn’t occur to me as a kid that the name of the creek in which the footage was shot, Bluff Creek, was a clue to Roger Patterson’s shaky relationship with veracity. Still, educated experts with the best software ever devised haven’t been able to prove conclusively that the footage is a hoax, and so grown men with a child’s inextinguishable wonder — they call themselves cryptozoologists — continue to pursue a North American apeman. Half of me wants to help these unemployable man-boys study for the high school equivalency test, but the other half quietly applauds their dopey dedication and yearns to join their rowdy jaunt.

Pursuit of monsters is a male obsession, as it was during our Paleolithic past. The adrenalized hazard of hunting mastodon and perhaps Gigantopithecus — the extinct giant bipedal ape bearing uncanny resemblance to Bigfoot — has never left the recesses of male memory. History Channel’s “MonsterQuest,” which ran from 2007 to 2010, was mostly male imbeciles stalking shadows in faraway nooks, and its “Ancient Aliens,” currently in its fourth season, is perennially hard-pressed to land a female investigator of such unmitigated buffoonery. (“South Park” lampooned this program as well.) All of those men stomping after noises in the night appear unaware that they are living out an eons-old endeavor while trying to resurrect the wonder they felt as children. They don’t seem to notice or care that the real monsters, the truly dangerous ones, are the devils dancing inside every human heart.

Barry Hannah once told an interviewer, “Privately we are all monsters, if we’d only look at our obsessions.” The human animal began as a quasi monster of his own, Australopithecus, on the African savanna roughly 8 million years ago: a diminutive brute hoping to survive among beasts. This was what offended so many of the Victorian fainthearted about Mr. Darwin: A reminder of the monster in us didn’t mesh well with their proper, stodgy rhythms, with their erroneous conception of themselves as seraphim not far from the polish of God.

Fun to mock for their unmolested sincerity, those hunting monsters, aliens and apparitions are nevertheless enactors of our collective id. The paranormal or supernatural resides within our own psyches because our dread and wonderment are ancient and encoded, because we need monsters to give shape, sound and scent to our dark interiority, to the jungle we were born in epochs ago, the jungle that still sways in us. We are indeed a monstrous tribe — look at what we’ve done to one another across the hell of history; look at the holocausts we continue to inflict upon the animals and earth — but we are monsterful, too, on occasion. Chaucer uses “monsterful” to mean extraordinary, gravid with wonder and possibility. Our immortal monster myths and skyward wishes are just that: the wondrous stories we tell ourselves in order to live, to rise above the doldrums of our everyday.

William Giraldi is the author of the novel "Busy Monsters" and senior fiction editor for the journal AGNI. He teaches at Boston University.