Authors are resorting to fake reviews and Internet sock puppets to sell their books. How long can it last? 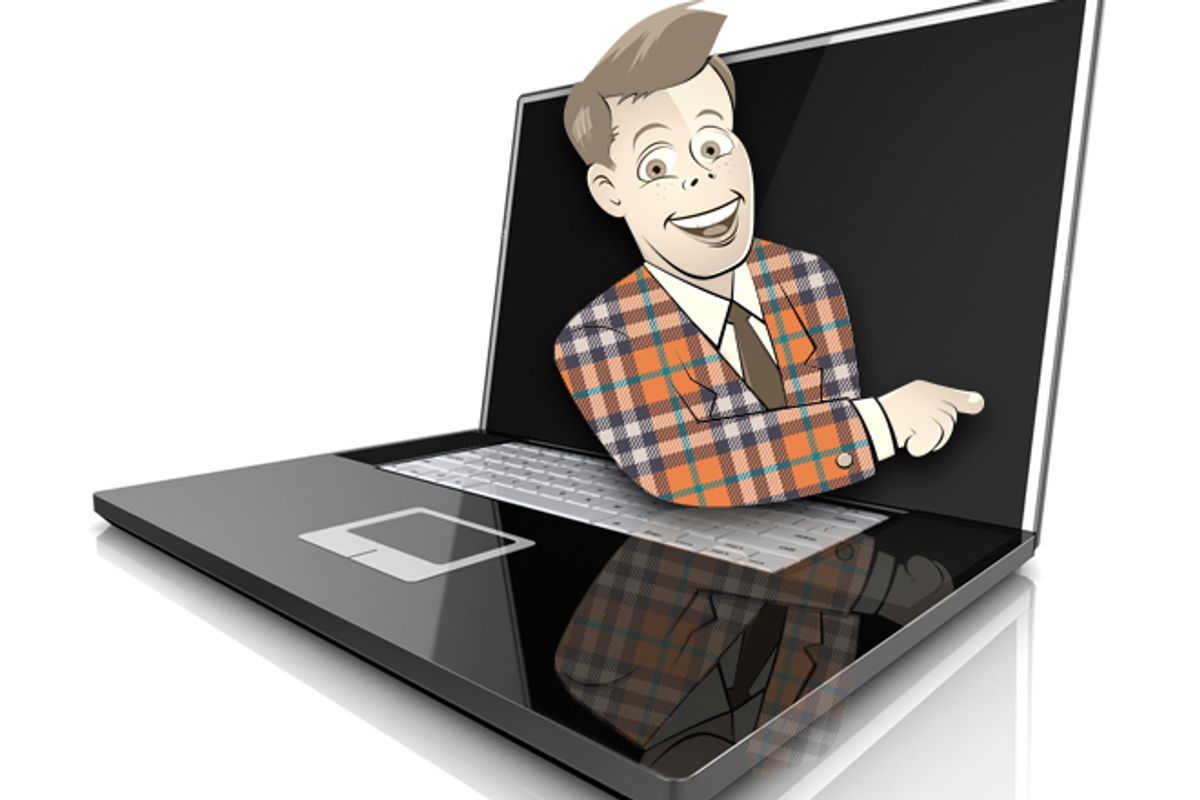 "I can't use Amazon to find new e-books anymore," a friend said recently over dinner. "I used to be able to search on the subject headings, but now all that comes up is a bunch of junk." The rest of the people around the table looked surprised. "Why would you ever search by subject?" one asked in bafflement. "But it's true that unless I know exactly the title and author I'm looking for, Amazon is pretty useless these days."

As someone who's never browsed Amazon looking for new titles, I was intrigued by their remarks. I've written in the past about the proliferation of "spam" or plagiarized books and repurposed public-domain content in the Kindle store -- the "junk" that my friend objects to. (The retailer has since vowed to crack down on such abuses.) But I never would have encountered these faux books if I hadn't gone looking for them in search of a story. My friends' observations reminded me that readers discover books in a wide variety of ways.

"You always have to read the reader reviews first, before you buy anything," someone else declared. On that point, everyone agreed. They didn't know about the companies you can hire to write positive customer reviews of your book if the volunteered ones are not forthcoming. In a recent article for the Guardian newspaper in Britain, Ewan Morrison listed these and other services in a long article arguing that the online forums once heralded as a way to circumvent old-school publishing and media coverage in getting the word out about a book are not very effective. That may be why more and more people are trying to game them, and thereby making them even less useful.

Morrison's article is a lengthy and blistering indictment of the idea that authors, whether traditionally or self-published, can use social networking to sell their books. Maybe it worked once, he concedes, when the concept was new -- say, two years ago -- but by now the Kindle store alone has been flooded with 1.1 million new authors. The chance of making oneself heard over the Web-2.0 din is vanishingly slim, or just vanishing.

Sure, some self-published authors, the early adapters like Amanda Hocking and E.L. James, have reaped hefty returns on their e-books, but, as Morrison points out, surveys show that these writers are a teeny tiny minority and that the vast majority of self-published authors make less than $500 per year on their books. "The e-book market now looks a lot like the old mainstream model," Morrison explains. "A small number of writers make a lot and everyone else wallows in the doldrums of minuscule sales." Furthermore, he's suspicious because "the pioneers are now selling courses and books on how to be as successful as they are (if they're so successful, why do they have to do all this consultancy work?)."

Self-published authors have my sympathy for the difficult task confronting them, but I'd like to turn attention to what all of this means for readers. Authors seem to find this particular POV switch difficult to make; writers can be pretty self-absorbed. But if there is one thing every writer ought to be able to agree on, it's that readers are the most important and precious element of the publishing process, and I would argue, the most endangered. There are a lot of other leisure activities the average reader could be enjoying, after all, from hanging out with her family to watching TV. It's in everyone's best interest to make it as easy as possible for readers to find books they'll love, and to encourage more people to read.

Which is why Morrison's article, as troubling as it will be for some authors, is also distressing for readers. In addition to services that will churn out fake five-star Amazon "reader" reviews for a fee, an author can hire a company to produce his Twitter feed, faking a relationship with his fans (if he has any to begin with) in a medium that once promised a form of direct contact. But perhaps the freakiest news on this front concerns statements made by a British thriller writer named Stephen Leather during a panel discussion at a crime fiction conference last month. Leather, who has had some success in his homeland, boasted, "As soon as my book is out I'm on Facebook and Twitter several times a day talking about it. I'll go on to several forums, the well-known forums, and post there under my name and under various other names and various other characters. You build up this whole network of characters who talk about your books and sometimes have conversations with yourself."

Leather assumes most of his fellow writers employ similar Internet "sock puppets." But then, he would. Still, it's impossible to say how much of the enthusiasm we think we're witnessing in fellow readers has instead been manufactured by authors (or their friends and hirelings), who are coming to resemble shady insurance and time-share salesmen. Steve Mosby, another writer on the panel, objected to the way Leather "seemed to concentrate on value in purely financial terms, and with his use of words like ‘punters’ and ‘units’ it was occasionally easy to forget we were talking about books at all. I’m sure he doesn’t really think like this, but it came across at times as though his readership was some kind of bovine factory farm that needed to be milked in the most efficient manner possible."

The press loves inspirational stories about Kindle prospectors like Hocking or crime writer John Locke striking it rich, but unfortunately this has fostered a bonanza mentality around the subject of self-published e-books (even among people who have no intention of actually writing the "books" they plan to sell). This is what Morrison means when he writes, "I'm convinced that epublishing is another tech bubble." E-books, of course, are here to stay. Many, many readers love them, or at least find them addictively convenient. But the delusion that a writer can come out of nowhere and use assorted social networking tools to engineer a bestseller overnight is untenable.

It's untenable not because it hasn't happened at least once or twice among the 1.1 million Kindle authors, but because readers aren't cattle to be milked. They're human beings who do writers the great favor of spending their time and attention (and sometimes their money) on authors' work. Their good faith, once lost, is unlikely to return. They've become leery of the glut of off-brand e-books being peddled to them by retailers and of incessant Facebook and Twitter pitches from people they barely (or don't even know). Most of them still believe that the fellow readers who recommend books to them online are sincere and actually exist, but how much longer can that last?

Author Steve Mosby's blog, in which he discusses Stephen Leather's statements about using Internet pseudonyms to talk up his own books.