With a new star, a new director and a new high-tech twist, the paranoid Bourne franchise enters the CIA drone age 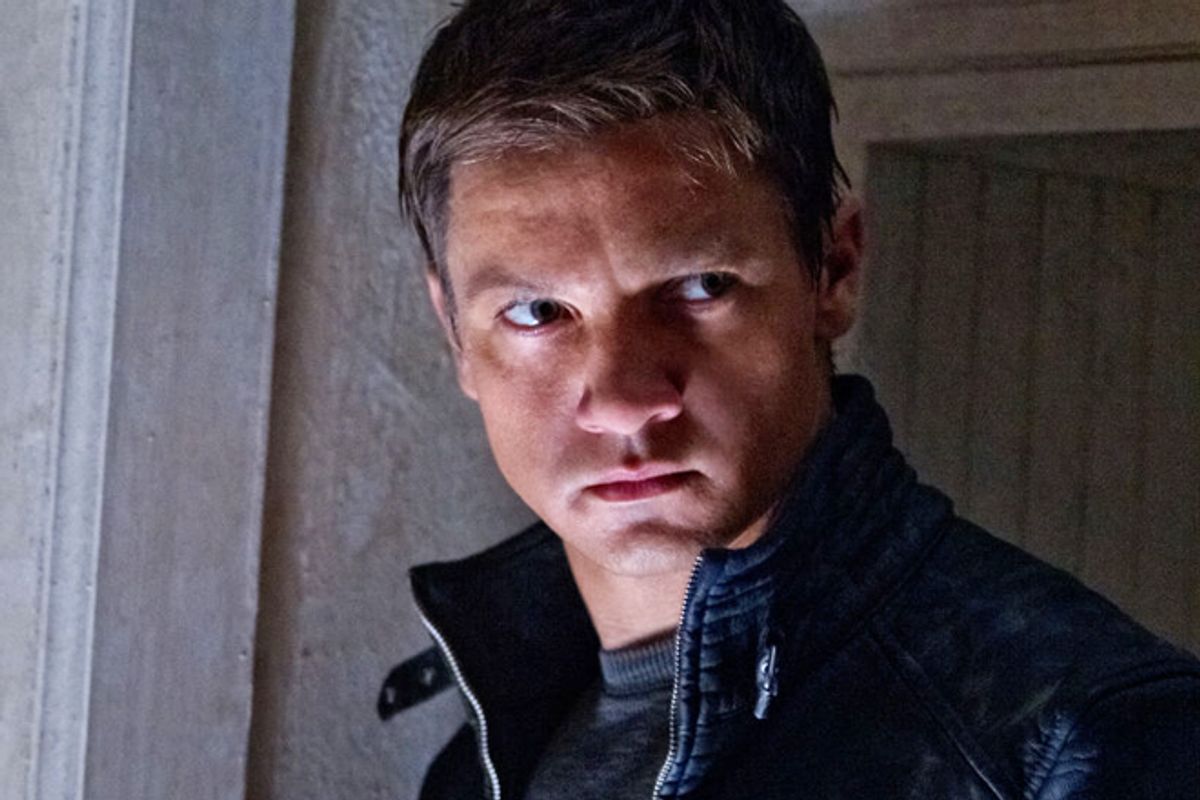 Jeremy Renner in "The Bourne Legacy"
--

It’s easy to be cynical about Hollywood’s insatiable desire for sequels and remakes based on audience “pre-awareness,” and indeed I am cynical about it in this space, week after week. In the case of “The Bourne Legacy,” though, something interesting has transpired, something that reminds us that in projects of this scale, you can never be quite sure who’s essential and who’s not. Star Matt Damon and director Paul Greengrass walked away from this satisfyingly dense and paranoid amnesiac-assassin franchise after the terrific “Bourne Ultimatum” in 2007, and the whole thing appeared to be toast.

But Universal Pictures was understandably loath to bid farewell to the most lucrative non-Bond enterprise in globetrotting spy cinema, and convinced screenwriter Tony Gilroy, a key factor in the initial trilogy, to slide into the director’s chair. You have to give both the studio and the filmmaker credit for ingenuity here, because Gilroy solves the central problem of “The Bourne Legacy” – introducing a new hero and launching a new narrative – with remarkable dexterity. While I don’t think this movie can compete with the second and third Bourne films for pure thrills and plot convolutions, Jeremy Renner makes an immensely likable action star, and the world of international spycraft Gilroy depicts has a high-tech, cold-blooded authenticity that feels fully up to date in the age of real-life CIA drone assassinations.

Matt Damon never appears on screen in “The Bourne Legacy” -- if that counts as a spoiler I'm, like, so sorry -- but his character is mentioned several times, and the action of this film intersects and overlaps with the action of “The Bourne Ultimatum” at numerous points. (I suppose it would be honorable to avoid spoilers for that earlier film too, but honestly, if you didn’t see it, a lot of this one won’t make sense.) Renner plays a chemically enhanced super-secret operative named Aaron Cross, who’s on a training exercise in the Alaskan wilderness when he abruptly becomes a target for official liquidation. What Cross doesn’t know (but we do) is that Jason Bourne has resurfaced in New York and a British journalist (Paddy Considine) is preparing to reveal all sorts of dirty secrets from the cutting edge of American intelligence. (Those events are central to “Bourne Ultimatum,” but form the background here.) So the kinds of shadowy higher-ups who make the CIA leadership look like Alex Trebek have decided to torch not just Bourne’s program, but the even scarier one Cross is part of as well.

Renner gives a performance that’s focused, masculine and unpretentious, pretty much everything you want from the hero of this kind of movie. Still, I’m not yet convinced he’s going to be a major movie star, which has almost nothing to do with his acting. He seems a little too introspective, maybe too nice. He doesn’t quite have the brash, borderline-creepy charisma of a Cruise or a Crowe or a Gibson or a Schwarzenegger. Anyway, Cross charges around the world from Alaska to Chicago to Washington to the Philippines, in search of the secret Nietzschean pharmacology without which he’s just a normal guy. Along the way he picks up a wide-eyed government scientist played by Rachel Weisz, who has come very close to becoming collateral damage in the official campaign to stamp out everyone and everything who knows about the bad stuff.

Gilroy stages some tense shootout sequences and a hair-raising motorcycle chase through the streets and back alleys of Manila, but as with the other “Bourne” films he’s written or co-written, the meaty center lies in the ambiguous portrayal of undemocratic or anti-democratic power and those who wield it. Edward Norton – who’s staging a mini-comeback of late, as a top-tier character actor -- nearly steals the whole movie as Eric Byer, a retired Air Force officer devoted to hunting Cross down.

It isn’t personal for Byer, a man who speaks in the clipped, bureaucratic banalities of middle management in order to distance himself from what he actually does. As he tells Cross in a flashback sequence, the secret spookery they engage in is “morally indefensible and absolutely necessary.” While that’s probably not Gilroy’s position, this is a Hollywood thriller, not a New York Times Op-Ed. What’s striking about the entire Bourne franchise is its matter-of-fact depiction of espionage as a world of total ruthlessness, in which avowed patriots will slaughter their own agents en masse rather than risk public discovery. This isn’t the jingoistic bluster of “24,” where unlikely scenarios are dreamed up in order to justify Arab or Russian bad guys. This is something closer to a chilly blend of Orwell and John le Carré, in which “national security” becomes a shibboleth independent of human life or morality or even civilization.

Gilroy’s reboot (co-written with his brother, Dan Gilroy) also features delicious supporting performances from veteran stage actress Donna Murphy and familiar TV face Zeljko Ivanek as zealous assassin types, along with briefer appearances from old reliables like Stacy Keach, Scott Glenn, David Strathairn and Albert Finney. “The Bourne Legacy” is a lean, clean killing machine that supplies some dark, late-summer thrills and chills and breathes new life into a seemingly extinct franchise. I’m genuinely not sure whether the Bourne universe, taken as a whole, acts as more of a stimulant or a narcotic: Does it encourage us to pay attention to the fact that our country has an enormous international secret police, or does it encourage us not to care. At any rate, this installment is too blatantly meant as the first chapter of a new trilogy, almost literally leaving its characters and their Keystone Kops chase – along with its purported moral questions – suspended in mid-air, awaiting the application of more millions of our dollars.