Pick of the week: Couples therapy with Meryl and Tommy Lee

Pick of the week: Meryl Streep and Tommy Lee Jones are terrific in the surprising marriage comedy "Hope Springs" 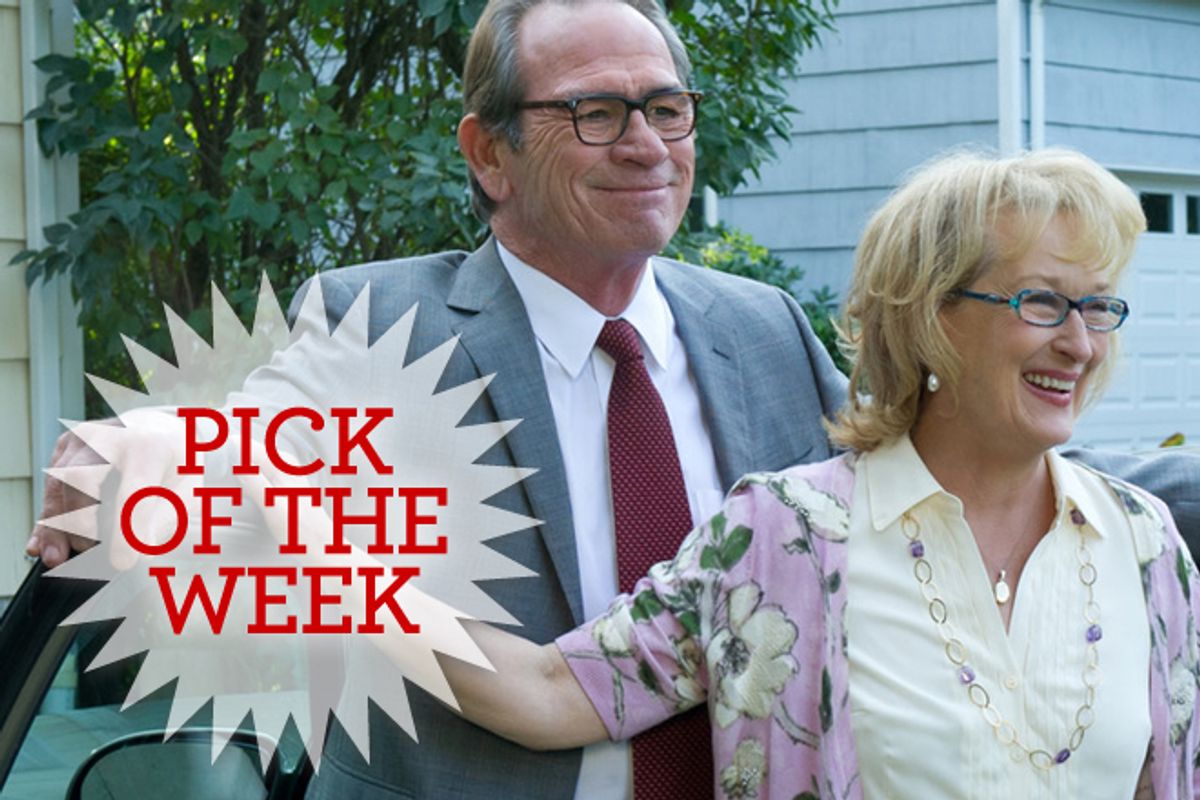 Here’s the problem with serendipity: The moment you start to measure or describe it, you also start to undermine it. If I tell you I’ve been to Utica or Fresno and had a surprisingly wonderful time, you start building up your expectations. Then when you go there and find out there’s no underground music scene, no used bookstore and no place to eat organic, free-range steak, you get all disappointed and think I’m an idiot. On that principle, I ought to keep my review of “Hope Springs,” the new marriage dramedy starring Meryl Streep and Tommy Lee Jones, to a few words: Not quite what you’re expecting. Really! So check it out, and I’ll see you here next week.

OK, I’ll keep going. But don’t claim you weren’t warned! Anyway, it’s probably fairer to say that “Hope Springs” both is and is not what you’re expecting. It feels as if director David Frankel (“The Devil Wears Prada”) and screenwriter Vanessa Taylor (a veteran TV writer-producer whose credits include “Game of Thrones” and “Everwood”) set themselves a technical or formal challenge: Can we strip the midlife-crisis movie, one of the most familiar templates in Hollywood comedy, down to its most pure and basic elements and cut out all the cheap gags?

And to go even further, can we build the entire film around conversations between two of the best actors in the business, with a calm, modulating, almost affectless third person between them (Steve Carell, as a therapist), and still deliver a mainstream, multiplex-oriented movie experience? (There are only a handful of other speaking parts, none of them significant, although Elisabeth Shue and Mimi Rogers get memorable cameo roles.) “Hope Springs” is an oddly ambitious blend of bland humor and startling insight into the realities of married life. It’s something like Ingmar Bergman’s “Scenes From a Marriage,” as translated into the universe of the Lifetime Network.

When I say all the cheap gags have been cut out, that’s not quite true. “Hope Springs” does include a scene when Streep – as Kay, a 60-ish married woman who works at a Coldwater Creek store in an Omaha shopping center – tries to navigate the relationship-advice books at Barnes & Noble. Every time she pulls a promising-looking volume about healing your marriage off the shelf, it turns out to be about polyamory or bisexuality or S/M. Later on, when she actually acquires a “Queer Eye”-style book of sex advice for women written by a gay man, it turns out to involve bananas as an instructional aid. But Streep plays those scenes in a genuinely questing spirit, one that mixes curiosity with discomfort, and with nary a hint of condescension or overreaction. She’s not necessarily crazy about a world where a wife’s role now includes rehearsing fellatio with pieces of fruit, but doggone it, she’s not so set in her ways she won’t give it a try.

“Hope Springs” is about characters nobody would ever be likely to make a movie about, except perhaps in a spirit of faint but audible mockery. Probably the most radical thing about it is that there’s none of that at all, and that Streep and Jones invest these resolutely ordinary Americans – people who have embraced ordinariness as a mark of pride – with subtle, tragic grandeur. Kay and her husband, Arnold, played by Jones with hunched shoulders and understated gravity, are solid middle-class citizens, neither rich nor poor. Taylor’s screenplay, and the two actors’ meticulous performances, frame them so precisely that they seem both generic and specific, a couple who straddle our nation’s generational and demographic divides. (If I had to guess: He’s voting for Romney, and she for Obama.)

Across 31 years of marriage, they’ve drifted into routine and drifted gradually apart. Arnold falls asleep in front of the Golf Channel every night, and then goes to bed (in the guest room) with a golf magazine. Kay cooks him breakfast every morning – one fried egg, sunny side up, bacon, toast and coffee – and gets a kiss on the cheek when he leaves for the office. They aren’t soulless robots or brainwashed consumer drones, but something is definitely missing, even if Arnold barely notices its absence. There is no trauma between them, no hostility, no overt unfriendliness. So far as we know, neither of them has cheated. (Although Arnold, as we eventually learn, has some highly specific sexual fantasies about a neighbor. “Carol?” Kay says to him in amazement. “Carol, with the corgis?”) But they haven’t had sex in five years, and we get the impression it was none too frequent before that.

After a certain amount of emotional tug-of-war, Kay convinces Arnold to accompany her to the picturesque Maine town of Hope Springs, where Dr. Bernie Feld (Carell) – whose book she found in that Barnes & Noble -- runs intensive therapy workshops for struggling couples. Carell’s terrific in the role, but if his name draws people in expecting some zany, “Office”-style, deadpan humor, they’ll be sorely disappointed. Even to call Dr. Feld a dramatic role is misleading; he’s less a character than a catalyst, whose role is to provoke Kay and Arnold into facing essential questions about their relationship. As Arnold grouses, with considerable justification, Feld’s environment is like a Potemkin village of wooden shutters and seafront cuteness, with inflated restaurant prices to match.

It might be easier to understand what kind of movie “Hope Springs” is if I explain that Mike Nichols was the original director, and Philip Seymour Hoffman was supposed to play the therapist. (The husband was originally to be Jeff Bridges, and then James Gandolfini.) Whether you detect a note of social satire in Kay’s mall-fashion ensembles and salon-styled hair, or in the almost mechanical routine of Arnold’s days, is entirely up to you. Honestly, though, I don’t see it that way; Frankel and Taylor are urging us to see that these people are, like the rest of us, running out of time before they die, and the fact that they love each other but have drifted apart is a tiny but reversible human tragedy.

An actor who thrives on his gruffness and unapproachability, Jones pushes his character into uncomfortable, emotionally revealing terrain in a way he never has, even in signature roles like “No Country for Old Men.” Meryl Streep requires no endorsement from me or anybody else, but I truly think that Kay is among her greatest performances. It would have been easy to let her slide into ludicrous caricature or salt-of-the-earth heroine, and she never does. Instead Kay is an anguished, anxious and exquisitely real person who makes the brave and lonely decision to take control of her own life, something many of us never do regardless of where we live and where we buy our clothes. The correct reaction to Kay’s self-reinvention is less laughter than humility, although this implausible late summer surprise offers plenty of both.