Mitt Romney and the return of the repressed 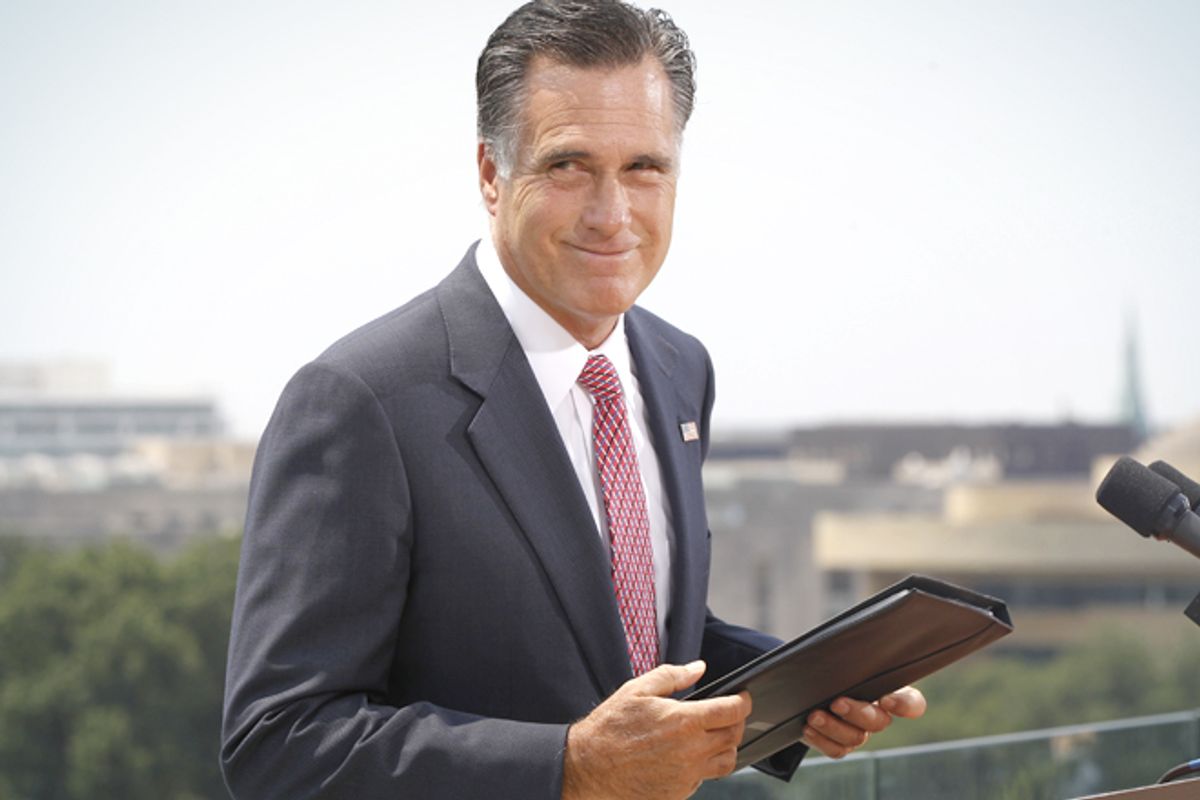 At a certain point, you have to feel sorry for Mitt Romney. He's so determined to hide his Massachusetts moderate past, to deny his years as governor there, that he's gone into his own self-created Mittness protection program. Now he wears a brand-new identity, "severely conservative," as he tries to court the GOP's ultra-right Tea Party base.

Except every once in a while, though, Romney or the folks closest to him trip up. Something makes them tell, well, something like the truth. A month ago, after days of Romney hitting President Obama for the "massive tax increase" allegedly represented by Obamacare, Romney advisor Eric Fehrnstrom famously defended the fine levied on those who refused to buy insurance as a penalty not a tax, because his boss had done the same thing in Massachusetts.

This week Andrea Saul has unleashed the hounds of hell trying to defend her boss from a pro-Obama super PAC ad, in which a steelworker laid off in a Bain Capital buyout alleges his wife died because she lost her health insurance thanks to Romney. Amazingly, Saul resorted to touting Romneycare, insisting "if people had been in Massachusetts, under Gov. Romney's health care plan, they would have had health care." The right immediately exploded with rage: How dare Saul invoke her boss's signature accomplishment as governor, which he's spent the entire campaign running away from? Have you no decency, madam?

RedState.com editor Erick Erickson headlined his post "The Moment All the Doubts About Romney Resurfaced on the Right." Rush Limbaugh called the remarks "a goldmine for Obama supporters." And Ann Coulter lost it completely with Sean Hannity,  shrieking that Saul, whom she calls a "moron," should be fired:

Anyone who donates to Mitt Romney, and I mean the big donors, ought to say if Andrea Saul isn’t fired and off the campaign tomorrow, they are not giving another dime, because it is not worth fighting for this man if this is the kind of spokesman he has…

There’s no point in you doing your show, there’s no point in going to the convention and pushing for this man if he’s employing morons like this. This ad is the turning point and she has nearly snatched victory from the jaws of defeat! She should be off the campaign.

(Two tiny things: I think Coulter meant to say "snatched defeat from the jaws of victory," but she was upset. And it's nice to hear her announce that the whole point of Hannity's show is "pushing for this man" Romney.)

These Romney campaign "gaffes," for lack of a better word, make me think of Freud's concept of "the return of the repressed," in which the tension involved in suppressing an uncomfortable truth occasionally becomes just too much, and the truth rises up, either in what Freud called "neurotic symptoms" or on the campaign trail as "gaffes." You don't have to be a Freudian to believe that Team Romney's trouble avoiding their candidate's actual record reflects the Herculean – and perhaps impossible -- effort such deception requires.

It's not just his record as Massachusetts governor that Romney is repressing. He doesn't like to talk about any of "the three Ms," as Joe Scarborough tweeted Thursday: Massachusetts, Mormonism or money.

When Bloomberg Businessweek's Josh Tyrangiel did a recent interview, he gently asked Romney about his religion, pointing to the many Mormons in politics, business and sports and wondering "what about Mormonism creates leaders?" But the candidate replied with "an elegant dodge," Tyrangiel told Scarborough on "Morning Joe" Thursday. The Republican no longer talks about his Bain Capital "job creating" years, either, given the controversy over Bain's job destruction. And he's never liked discussing his vast wealth, first inherited from his father and then dramatically engorged by his own private equity success.

I think the energy required to suppress the truth on those three fronts is part of what forces Romney to behave like a robot and speak in bizarre faux-platitudes. Trying to avoid anything remotely controversial, he praises Michigan's trees for being "the right height." Lemonade becomes "Lemon. Wet. Good." A chocolate doughnut becomes "one of those chocolate, um, chocolate goodies." The exhausting effort to hide the advantages that come along with a lifetime of wealth results in head-scratching screw-ups like talking about Ann Romney's two Cadillacs or his NASCAR-team owning friends, offering to make a $10,000 bet with Rick Perry, or making bizarre "jokes" about being unemployed when talking to unemployed voters. The repressed inevitably returns, and often at the worst moment.

But another way Romney copes with his inauthenticity is being absolutely brazen in his lying. Just this week, he bashed Obama for granting welfare-reform waivers he himself sought as governor. But since he doesn't even admit he was ever Massachusetts governor, safe within his Mittness protection program, he doesn't have to take any responsibility for what he did then. Now, even Rick Santorum and Newt Gingrich are acknowledging the Romney lie was a little bit too bald-faced, and that the presumptive GOP nominee went too far in claiming that the president relaxed work requirements. Gingrich admitted "we have no proof" the waivers did that, and said if anyone asked him his opinion about the ad's claims, he “would have said this makes it possible.” Santorum likewise acknowledged Romney's falsehood, saying on a conference call that Obama could only "potentially gut" welfare reform at some point in the future.

Of course, that's less the return of the repressed that the return of the GOP primary rivalry. It's safe to say that after the truckload of manure Romney dropped on his GOP confreres, nobody likes this man. (His 2008 rivals hated him too.) Santorum actually chuckled Thursday when asked to comment on Saul's remarks. He chuckled! He's got to love the fact that his famous warning – "Mitt Romney is the worst Republican in the country to put up against Barack Obama" -- has become a routine sound bite in this campaign.

But wait, there's more: Romney's welfare lie displayed another of his signature forms of brazen dishonesty: citing an "expert" who allegedly agrees with you, when said expert in fact disagrees with you. Former President Bill Clinton, whose welfare reform law Obama allegedly unraveled, released a statement rebuking the Romney ad and supporting Obama's moves. The very same day, the Washington Post's Ezra Klein found that every economist cited in a Romney economic policy paper disagreed with the way the campaign had used their research. Only last week, author Jared Diamond wrote a New York Times Op-Ed to refute Romney's claim that his book "Guns, Germs and Steel" provided a basis for Romney's racist claims about Palestinian "culture."

Then there are the Romney lies that don't even bother pretending to be based on expert opinion or fact. I never got over the very early campaign ad that featured a clip of Obama saying "if we keep talking about the economy, we're going to lose" — which was in fact a 2008 clip of Obama quoting an aide to John McCain. Just last week we enjoyed his bald-faced lie that the Justice Department's efforts to secure early voting for all Ohio voters was an "outrage" that would disenfranchise military voters. (Please note I'm not even listing Romney's claim that Obama told business owners, "You didn't build that," since you could at least argue Obama himself left the door open to misinterpretation by not adding the word "alone," though he means, everybody gets help from government infrastructure, education and military investment.)

I was tempted to go off on my standard rant about the media's failure to fact-check Romney's outrageous claims – except you know what? By and large reporters have been pretty good about debunking Romney's lies. Ohio papers immediately made clear there was no basis for Romney's military-voter lie. Journalists quickly discovered and reported that Romney himself asked for the welfare waivers he criticized Obama for granting. The hypocrisy in Andrea Saul's Romneycare remarks became immediate news.

And while it sometimes feels like Romney lies with impunity, maybe voters are picking up on his utter inauthenticity – about "the 3 Ms," and maybe more. In the latest Washington Post/ABC News poll, Romney's favorability ratings are at an all-time low, at 40 percent; 49 percent of all voters view him unfavorably, including 50 percent of independents. The Saul controversy reminded the party's right-wing base that they don't trust him, but neither do most of the rest of the voters, apparently. Romney has turned his back on his past and revised his political beliefs so thoroughly he almost seems willing to sell his soul to be president. But what if nobody's buying it?