UPDATED: The paper of record goes to extremes to avoid profanity again and again -- and misses the story 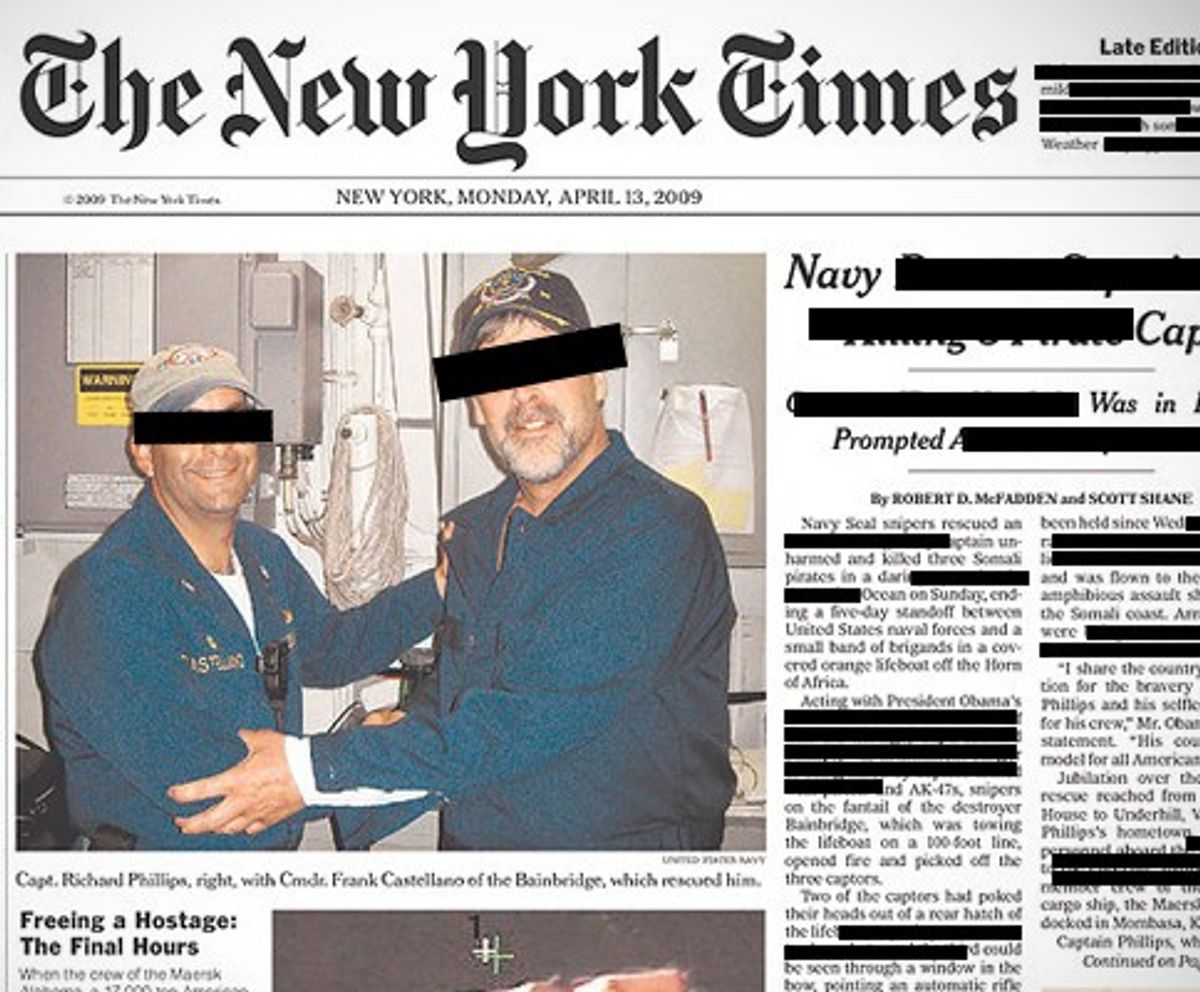 The New York Times prides itself on being one of the last, great bastions of clean language. It is a place where no F bombs drop, where dads do not say "shit." Yet in an increasingly bleepworthy world, the paper of record's profanity-avoidance tactics are beginning to look not just demure, but like poor journalism.

The paper's latest bout of primness came on Wednesday in a story about an app that enables Facebook users to "Unbaby Me." In the piece, writer Austin Considine notes that, "There are already blogs devoted to mocking over-sharing parents who, for example, post photos of their placentas. ('You used to be fun,' reads the tagline. 'Now you have a baby.')"

The quote is from B., as she's known online, the Brooklyn-based creator of STFU, Parents. Yet you wouldn't know that from The Times' story, which conspicuously didn't name or link to her blog. The Times had no such hesitation about naming an online store called AntiBaby or acknowledging the Stuff Hipsters Hate blog. This troubled B., who emailed The Times "in the hope that it will be credited."

What she got instead was a pithy retort from The Times' senior standards editor Greg Brock, who informed her that, "We did not name the site because The Times does not use such references when they refer to things like Shut the F*ck Up. Just last week we omitted a full reference to WTF (What the F---). Instead, we noted that we were referring to a podcast by Marc Maron."

He went on to explain his logic: "For one reason, we don't like to include such references for younger readers -- or for any readers who might be offended. Granted, we aren't the parents of young readers. But we feel some obligation to try to maintain The Times as a respectable publication and respect all of our readers." In other words, even the mere suggestion of a profanity – an F placed suggestively betwixt an ST and a U, or after a W and a T, may be all right for you bloggers and you podcasters, but it is certainly not OK for a "respectable" publication.

As B. told Salon on Thursday, the rather snooty implication is that "my site is somehow too vulgar or offensive for readers. But then, why reference it at all?" (Salon emailed editor Greg Brock Thursday; he has not replied to our request for comment.) But if naughty words and all allusions to them are not respectable enough for The Times' readers, I guess that the Oscar-winning film "The King's Speech," which features a torrent of "fucks," is not, as well. Certainly the critically acclaimed, award-winning films of Quentin Tarantino, the television series of David Chase, the plays of David Mamet, the novels of Henry Miller, the songs of the Beastie Boys and Kanye West, and the musical of Trey Parker and Matt Stone – many of which have been enthusiastically reviewed in The New York Times -- are not really "respectable." Good to know! Somehow, however, the duo LMFAO makes the cut. Apparently the key to New York Times–level respectability is a penchant for party rocking.

The Times has forever grappled awkwardly with its intense determination to keep itself verbally unsullied. When I mentioned the STFU debacle on Twitter yesterday, the great linguist and former Times columnist Ben Zimmer leapt helpfully into the fray, offering some outstanding recent examples of The Times' profanity avoidance and also pointing to Arnold Zwicky's hilarious chronicles of all that which "The Gray Lady avoids." I'll just give you some of the highlights.

In 2005, the paper called Nick Flynn's "Another Bullshit Night in Suck City" "Another Bull//// Night …", avoiding even the "suck." Yet strangely, The Times didn't mind naming Justin Halpern's  "I Suck at Girls," even as it tiptoed around the author's previous bestseller, "_ My Dad Says."

More recently, the humorous children's book parody "Go the Fuck to Sleep" has been holding steady on the bestseller list as "Go the __ to Sleep." And when Ben Brantley recently reviewed the play "Cock," he opened with the warning that "'Cockfight Play' is not the title of the terrific, tense little comedy by Mike Bartlett that opened on Thursday night at the Duke on 42nd Street. Its real name, which is only one syllable, is unprintable here."

Last year, in the first sentence of his review of "The Motherfucker With the Hat," Brantley called it "The play that dare not speak its name," aka "The ___________ With the Hat." There's more. In a story last month about the Fuck! I'm in My Twenties blog, The Times simply called it a "viral blog" in a feature titled "Wash That Blog Out With Soap." But perhaps the greatest example of all is a 2007 review of hardcore band Fucked Up, known to The Times as "********."

The Times' steadfast avoidance of all things four-lettered — and its mad asterisking and underscoring to that end — could just be written off as an amusingly old-fashioned stand for propriety. And while it may seem silly to care about whether or not The Times inserts a common bit of Internet slang into a story, by choosing what is nameable – and avoiding that which it deems not -- The Times is failing massively in the primary job of journalism. To tell the truth. To tell it without judgment. I'm not saying The Times needs to turn into an episode of "In the Thick of It." We don't need "Paul Krugman: Uncensored!" But when The Times made the choice to name AntiBaby and Stuff Hipsters Hate but not STFU, Parents, it was making an editorial decision. It was avoiding a fact. And it was opting to give a moral value to three sites based solely on what they're called. It was, as Greg Brock says, deciding what's "respectable."

Here's the problem with that: News doesn't care about being respectable. Art doesn't either. They don't ask permission or limit themselves; they don't need a "bar of soap." So if you want to talk about what's happening, you are obliged to say what is happening. Use the words. Report it accurately. Don't decide that because you deem a thing unnamable, it is therefore not newsworthy. To do so may be a triumph of standards, but it's a failure of ethics. And frankly, it's seriously effed up.

Considine contacted Salon this week to clarify how the STFU reference came to be omitted from the feature. He told us, "I did not make the decision to remove the name and link to the blog. I included its full name, and embedded a link to it, in each of the several drafts I submitted. An editor removed the reference before it went to press."