What the media missed about Chick-fil-A

There's more to the fast-food saga than you might think 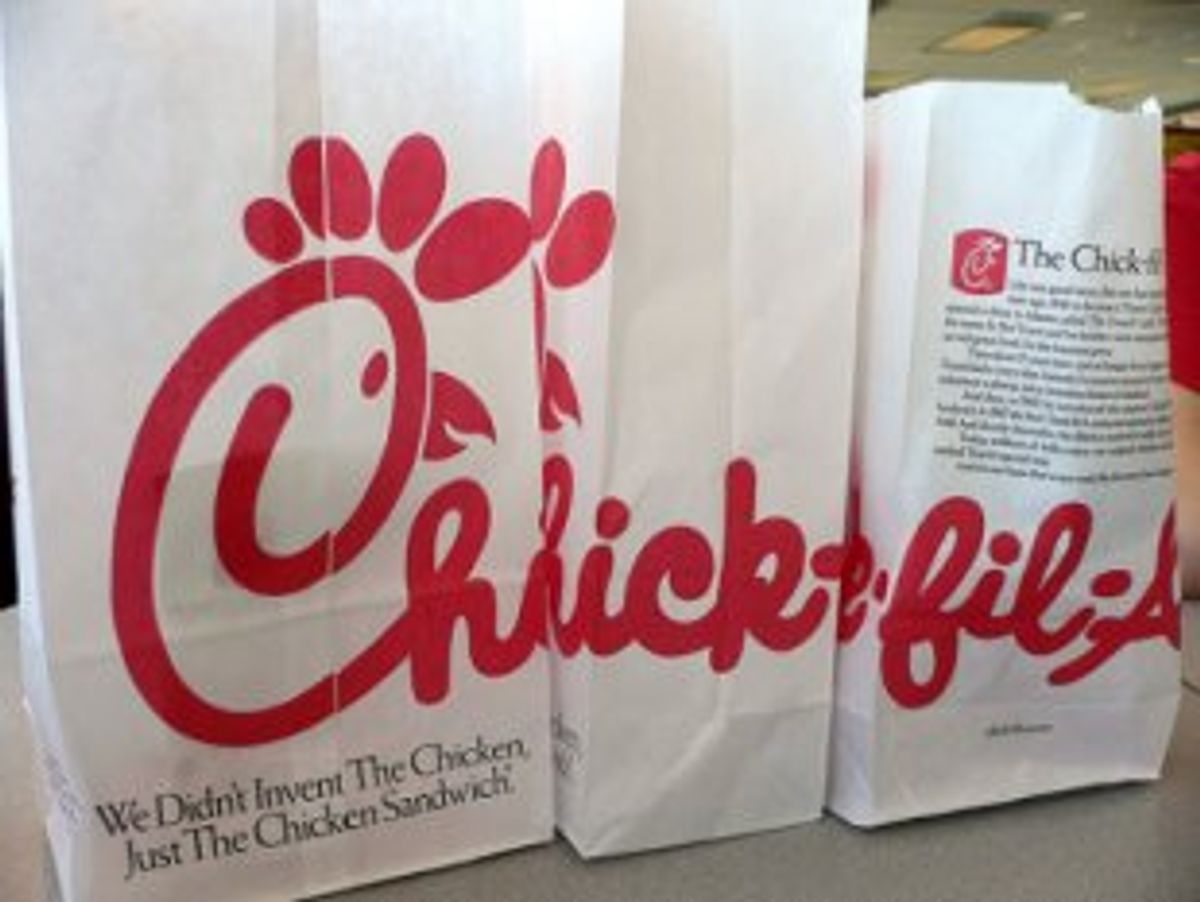 It’s probably one of the more bizarre manifestations of the U.S. culture wars in recent years: Chick-fil-A president and COO Dan Cathy expresses his support for “traditional marriage,” LGBTQ activists issue calls for a boycott, and conservatives -- including, most notably, Mike Huckabee -- respond with the now infamous Chick-fil-A Appreciation Day, which is attended in “droves.” Finally, LGBTQ activists respond with two counter-protests, a Same-Sex Kiss Day (self-explanatory) and Starbucks Appreciation Day, intended to show support for a company that has given money to same-sex marriage causes.

It’s been a busy few weeks for same-sex marriage opponents and detractors alike, not to mention chicken sandwich connoisseurs. Given all the media noise, you might think you’ve heard everything there is to know about the Chick-fil-A controversy. In fact, the media has missed a number of important and interesting aspects of the story.

1. LGBTQ rights supporters started boycotting Chick-fil-A years ago. Many media outlets treated Dan Cathy’s announcement as new information, though the company has been stepping up involvement in Christian Right politics since Cathy took the helm in 2001. But even his father, Truett Cathy, has donated to causes associated with the Christian Right for many years. And Chick-fil-A didn’t exactly start out as a secular business. Since Truett Cathy, a Baptist, opened his first Chick-fil-A restaurant in 1967, the family business has operated according to Christian ideals like closing on Sundays. A 2007 Forbes exposé revealed just how deep the practices go -- the company’s mission is to “glorify God,” and it has faced discrimination suits by plaintiffs alleging intense pressure to participate in Christian prayers, conferences and other events. Some franchises stock right-wing news media like the Washington Times or play only conservative Christian radio.

A 2009 Equality Matters report found that Chick-fil-A’s charity division, WinShape, donated more than $1 million to anti-gay groups between 2001 and 2008. In 2009 alone, $1.7 million went to anti-gay groups. Chick-fil-A has promoted the Christian Right’s alternative to Sesame Street, Veggie Tales (originally formed to oppose the allegedly “pro-homosexual agenda” at PBS), as well as Focus on the Family materials, in its kids’ meals. For at least the past decade, Chick-fil-A’s ties to the Christianright have been common knowledge among many LGBT groups and progressive organizations. Many members of these communities have been boycotting Chick-fil-A for years now.

2. Chick-fil-A mistreats its workers. I worked at a Cary, North Carolina, Chick-fil-A while in high school in the mid-'90s. The hourly wage I made was extremely low -- around $6 per hour, as I recall. Once, a manager told the franchise owner that I was unfriendly to a customer, and as punishment I was forced to spend hours cleaning mildew off the floor of a back room.

It turns out that I was not the only low-level employee the company has mistreated over the years. Although Chick-fil-A boasts of how well it treats its workers, that treatment seems to apply mostly to franchise owners, who had a 2007 turnover rate of just 5 percent. But the turnover rate for hourly employees -- that is, the people on the frontlines of kitchen prep and cash registers -- was 60 percent. Hourly wages are quite low throughout the company. Plus, its employees are mostly non-union, so there are many opportunities for abuse.

There have been reports of extensive employee vetting, including intrusions into employees’ personal lives about issues like “personal sin.” The company saw about 12 lawsuits between 1988 and 2007. There were a range of disturbing allegations, from the termination of a Muslim employee who opted out of Christian prayers to the demotion of women for speaking out about sexual harassment. A Georgia woman alleges being fired in 1997 after being pressured by the company to stay at home with her children.

3. No one is actually taking action to stop Chick-fil-A from setting up shop in any town. That this debate turned into a discussion about First Amendment rights is a testament to the Christian Right’s ability to aggressively shape public discourse, because the Chick-fil-A brouhaha has not infringed on anyone’s First Amendment rights. According to Feministe, “No one’s taking actual official action to block Chick-fil-A from opening anywhere as long as they’re in compliance with the law. Walmart’s been blocked from opening in NYC before because of noncompliance with local labor laws, but not because of the Walton family being composed of jackasses. Whole Foods is helmed by a jackass, too, but they’re allowed to operate.” Neither Rahm Emmanuel nor any other American official, in other words, has actually attempted to undermine the company’s right to exist -- or set up -- anywhere in America.

That’s right, “[W]hat these elected officials are doing is posturing. Politicking. Blustering. Showing their gay and gay-friendly constituents that they don’t approve of Cathy’s comments.” Some mayors threatened to withhold permits, but nothing has materialized. Sure, threatening to undermine First Amendment rights is unsettling, but rights violations are by no means imminent. And the fact that the courts wouldn’t likely uphold business bans means it probably isn’t going to happen. But the media somehow lost sight of the facts. Even Jon Stewart, professional commentator on political posturing, missed what was really going on here and conceded that there may be a First Amendment issue in play.

John Rocker of WorldNetDaily wrote, “Technically, as our Founding Fathers intended, we are all given the undeniable right to voice our thoughts and opinions freely without fear of scorn and/or ridicule derived from non-agreement." Whether or not Rocker’s elementary school curriculum neglected to cover important historical boycotts (e.g., the Montgomery Bus Boycott), it’s hard to imagine how anyone could think the First Amendment protects us against ridicule, particularly given the ubiquity of political satire -- like that at "The Daily Show" and "Colbert Report" -- in pop culture. And even if WND has established itself among the wingnuttiest of right-wing Web sites, it’s astounding that the publication’s editors didn’t catch a phrase that embarrassing.

But Rocker wasn’t the only misinformed blowhard making waves in the media about this. Catholic League president Bill Donohue suggested that the “overwhelmingly white and well-educated” boycotters wanted “to punish those who hold to the traditional view. This is madness laced with fascistic elements.” The American Family Association’s Bryan Fischer accused boycotters, whom he dubbed the “bullies at Big Gay,” of “trying to go Ahmadinejad on Chick-fil-A. They want them wiped off the face of the map.”

5. Chick-fil-A is not the only Christian Right-affiliated chicken business out there. John H. Tyson, CEO of Tyson Food, “America's largest purveyor of chicken," has not hidden his strategy of integrating Christian beliefs into the Tyson business model. According to the Human Rights Campaign, the company’s record when it comes to gay friendliness is pretty abysmal. Though the company has a non-discrimination policy for gay and lesbian employees, it has no other policies in place for LGBT protections and no domestic partnership benefits. Chick-fil-A is only slightly worse, with no LGBT protections at all. In 2005, Talk to Action reported that the company makes chaplain services available to all employees, and employs chaplains who are “nearly all Christian evangelicals, fundamentalists or both.” That same year, the company held an event promoting company chaplaincy programs at Yale University.

That said, Tyson is not quite the hardliner on some Christian Right issues that Chick-fil-A seems to be. For example, consistent challenges from unions like the Teamsters mean that it uses slightly more union employees. The company even came under fire from the Christian Right in 2008, when a plant in Shelbyville, Tenn., negotiated with union members to provide a paid holiday on Eid al-Fitr rather than Labor Day because about one-fifth of the plant’s employees were Somali Muslims. The Christian Right predictably engaged in Shariah fear-mongering in response.

Despite small union victories like this, Tyson’s union influence should not be overstated, as the company has been routinely criticized for abusing employees on human rights grounds. A 2005 report from Human Rights Watch -- which heavily featured Tyson Food -- noted, “Nearly every worker interviewed for this report bore physical signs of a serious injury suffered from working in a meat or poultry plant.” And according to The New York Times, “The report also concluded that packing companies violated human and labor rights by suppressing their employees' efforts to organize by, for example, often firing employees who support a union. The report asserted that slaughterhouse and packing plants also flouted international rules by taking advantage of workers' immigration status -- in some plants two-thirds of the workers are illegal immigrants -- to subject them to inferior treatment.”

6. Not all evangelicals have gone all-in for Chick-fil-A. But this doesn’t mean they’ve provided many strong statements against it either. Without really engaging the fact that Chick-fil-A funds hate groups, some evangelical Christians have engaged both sides of this debate. Rachel Held Evans, an evangelical Christian blogger and author who is respected among liberals for challenging the Christian Right playbook, writes that both sides are getting it wrong. But her critique of the boycotters mainly boils down to the fact that she doesn’t feel comfortable labeling close family and friends who oppose gay marriage as homophobes. She writes, “I beg you to please remember that not all Christians who speak out against gay marriage are bigots or homophobes, and calling them those names is as unjust as it is unkind. Many of the people I love most in my life fall into this ‘camp,’ and most of them mean it when they say that they sincerely love their friends and relatives in the LGBT community and wish they knew of some way to hold to their convictions without hurting or insulting their neighbors.” Of course, bigotry expressed in a friendly tone is still bigotry.

And evangelical blogger Matthew Paul Turner doesn’t really contest the notion that LGBT identity is “sinful,” but simply accuses “the church” of being unloving. But he’s at least a bit more effective in critiquing Christian culture: “Think about it. Would you feel loved by somebody if they included rules, context, and/or explanations about your lifestyle every time they spoke about how much they don’t hate you? Only when talking about gay people do Christians feel the need to preface their ‘love’ or ‘non-hate’ with some variation of ‘I don’t agree with your lifestyle, but …’ Christians don’t talk about any other group of people like that -- only gay people.”

Justin Lee of the LGBT-affirming evangelical Gay Christian Network hedges on whether or not to support the Chick-fil-A boycott, though he pays scant attention to the fact that Chick-fil-A has actively funded anti-gay causes, mentioning that only as a side note.

Bonus Item 7. A meme enrages Glenn Beck. On Chick-fil-A Appreciation Day, Stephanie Drury of the popular ex-evangelical blog Stuff Christian Culture Likes tweeted, “You’d never see this many Christians lined up to help at a homeless shelter or food bank. And that’s something Jesus actually said to do.” The tweet was quickly turned into a meme that started going viral.

But the meme really took off when Glenn Beck, who has half a million Twitter followers, took notice and tweeted, “Viral Chick-fil-A picture claims Christians don’t feed the poor -- Oh really? We have proof to the contrary.”

Beck linked to an article about tens of thousands of Christians lining up for a day of service organized by right-winger David Barton, which of course proved nothing about the Christian Right’s focus on feeding the poor relative to its participation in “appreciation days” for chicken sandwich chains. Nevertheless, Beck let the “mainstream media” have it, asking, “Since when are liberals concerned about anyone lining up at food kitchens?”

Drury, meanwhile, tells AlterNet, “It has been my longtime goal to piss off Glenn Beck.”

Kristin Rawls is a freelance journalist based near Raleigh. Her work has appeared in The Guardian, The Christian Science Monitor, AlterNet, In These Times, Religion Dispatches, GOOD magazine and many others. Follow her on Twitter @kristinrawls.