How right can the GOP go?

After this week's Missouri primary, the Tea Party is once again at risk of pushing Republicans over a cliff 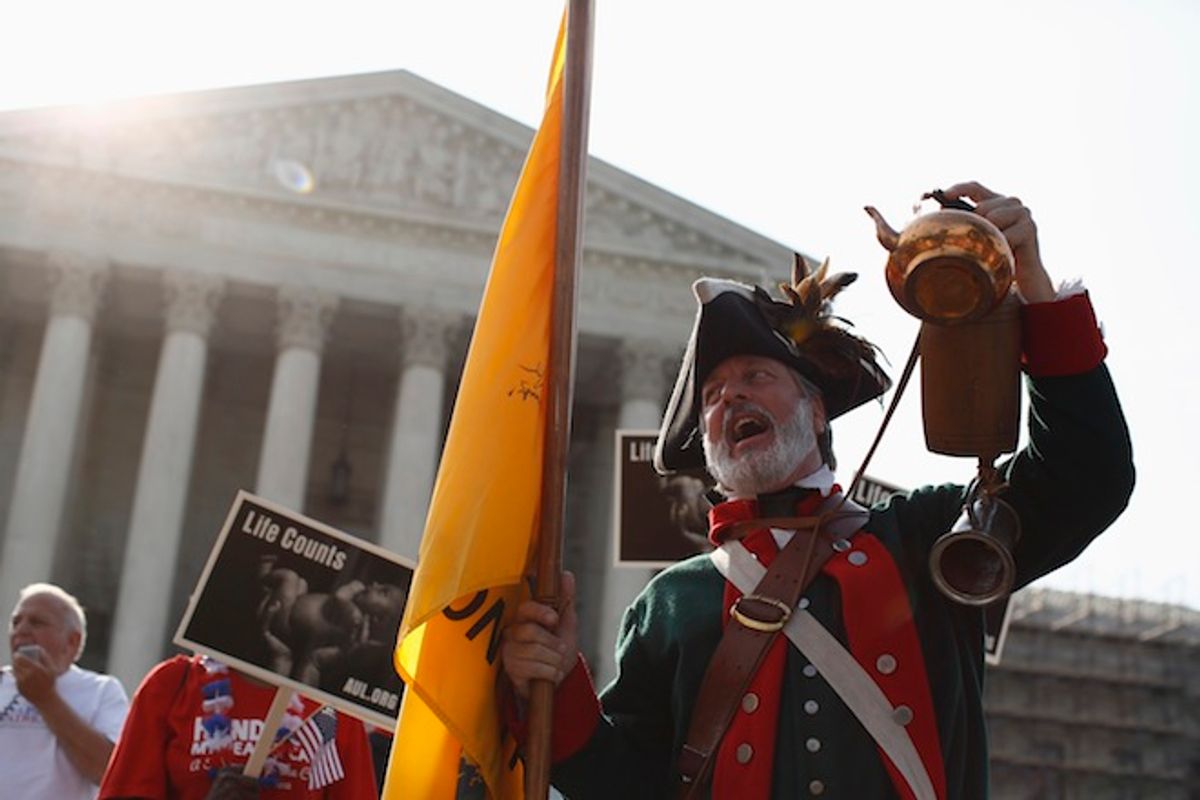 Does Tea Party pressure on Republican primaries help or hurt conservatives? This week, conservative member of the House Todd Akin pulled off an impressive upset in the Show-Me state's Senate primary to take on incumbent Democrat Claire McCaskill. McCaskill is widely seen as vulnerable, with Akin the consensus weakest – and most conservative – of the three Republicans running against her. Ask most conservatives and liberals, and they would agree that well-organized primary challenges have been a big part of Republican success. But there’s another side to this story, as well. Could primary challenges backfire?

Clearly, there are some cases in which ideological challenges are an easy call. For example, Texas Republicans were certain to hold the open Senate seat there, and so it made perfect sense for conservatives to push for the candidate they thought would be best in office, regardless of how it would affect the November vote. Even if nominee Ted Cruz might do several points worse than defeated Lieutenant Governor David Dewhurst, that would just mean he will win by a slightly smaller landslide. There was little reason for conservatives to have backed off that challenge.

However, the main theme of conservative primary challenges in recent cycles, going back well before anyone was calling themselves a Tea Party, is that strict conservative conformism has to be enforced everywhere, regardless of the November consequences. So Pat Toomey challenged Arlen Specter in 2004 and drove him to switch parties by challenging him in 2010; Steve Laffey took on Lincoln Chafee in 2006. However, it’s accelerated from a few challenges per cycle to an across-the-board effort. In 2010, there were a whole bunch of conservative victories in competitive or Democratic-leaning states, including Wisconsin, Delaware, Nevada and Colorado, and we’re seeing more of the same in 2012.

The problem with assessing the effects of this strategy is that while the direct effects should be fairly easy to handle – Republicans lose some elections, but more enthusiastic conservatives get elected – the larger effects are indirect, and almost impossible to calculate.

On the one hand, conservative primary challenges certainly have the effect of scaring incumbents into following conservative policy choices. This year’s poster politician in this regard has been Orrin Hatch, who has done everything possible for the last couple of years to prove he was as Tea Party as possible in order to avoid the fate of defeated Utah Senator Bob Bennett. This is generally seen by conservatives as an important effect of the strategy, and there’s certainly something to it, although it’s difficult to measure because there are multiple factors pushing Republicans in that direction.

But there’s another indirect effect. Being the party of Sharron Angle and Christine O’Donnell, and even being the party of Todd Akin and Ted Cruz – or, perhaps more to the point, being the party that rejected (conservatives) David Dewhurst and Bob Bennett and (moderates) Mike Castle and Arlen Specter – may convince potential candidates that they want nothing to do with the GOP.

That’s a really hard one to measure. But it may have happened in this cycle in states such as Pennsylvania, Ohio and Michigan, in which Republicans were not able to recruit strong candidates to threaten potentially weak Democratic Senators. Even in cycles where a weaker conservative is able to win in a more moderate state, it’s likely that a candidate whose main credential is ideological fealty may be a weaker candidate for re-election down the road than one who has broader strengths. It may even explain, although it’s even more difficult to know at that level, the inability of the Republican Party to field candidates for its presidential nomination who are in the party’s mainstream and have conventional credentials.

After all, what are you supposed to do if you’re a talented politician who is considering a career in Republican politics? Do everything right, and you still are vulnerable to an ambush from Tea Partiers. Even if you win office, you’ll constantly be in danger of a primary defeat; if your own party could turn on you at any moment, there are no safe seats. Not to mention that if you are in office, there’s a major disincentive to actually get involved in making policy; the safest thing is to just keep your head down and vote the right way.

Put it all together, and it seems likely that the best political talents might be reluctant to become Republican politicians. Is that, plus the danger of losing contests in winnable seats such as the 2010 Senate contests in Nevada, Delaware and Colorado, enough to overwhelm the effect of having an increasingly ideologically loyal set of those who do get elected? Again, I don’t know the answer to that one, and I don’t think it’s even possible to really get a good answer. But I do know that the effects here go in both directions, and there’s no particular reason to suppose that conservatives are better off overall from enforcing ideological discipline the way they’ve been doing it.