It's not as blue as you think: The Empire State has more close congressional races than any other state 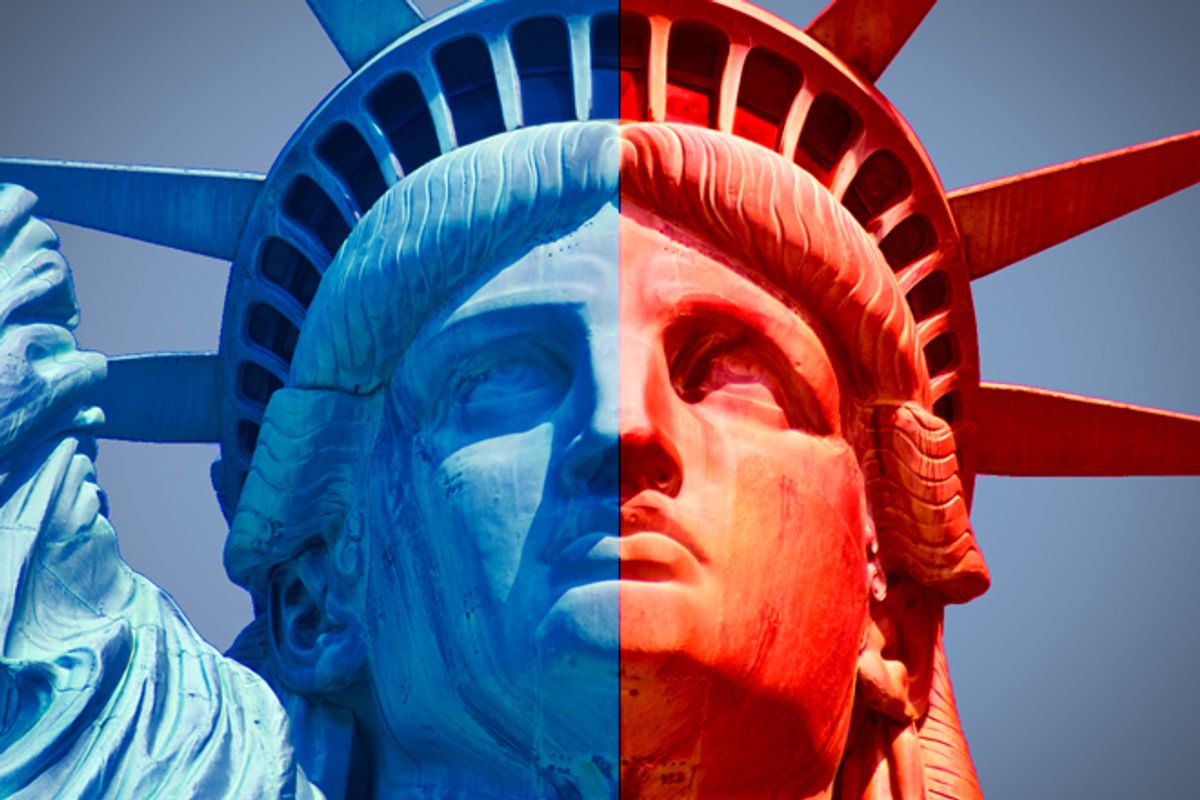 Pundits are rarely in a New York state of mind in November.  The state hardly ever comes up as a battleground. Most people assume it’s unwaveringly blue. But the past two years of political turmoil have made New York the front line in the battle for Congress.

According to the Cook Political Report, New York now has eight congressional races that are either leaning toward one side, or which are flat-out tossups -- more than any other state. The next closest is California with seven such districts — despite having nearly twice as many congressional representatives than New York. That means that President Obama’s ability to get legislation through a friendly Congress in a second term could be decided by the results in several key New York races.

In 2010, no state was stung by the Republican sweep of the House more than New York. Before the election, New York had three Republican representatives. After the dust settled, Republicans increased their numbers in the New York delegation nearly three-fold -- eight of New York's 29 seats were Republican.

Now the seats are up in the air again, thanks in part to New York's redistricting process. This year, the politically toxic environment resulted in a stalemate in Albany, allowing a federal judge to take responsibility for redrawing the state's 27 -- down from 29 -- congressional districts. The result was districts based on demographics rather than incumbents, creating a new level of uncertainty in this year’s races.

The contested districts are split evenly between Democrats and Republicans. Two stand out as the most critical. The first is Rep. Nan Hayworth’s newly redrawn 18th Congressional District.

The district has traditionally stretched from the edges of New York City’s suburban enclaves north into rural Hudson Valley. Considered a bastion of moderate conservatism for decades, the last 10 years have seen the district’s Democratic enrollment grow into an ever-so-slight majority. This year’s redistricting process did little to change the enrollment or demographics of the district.

Hayworth, a Tea Party favorite, beat two-term incumbent John Hall in 2010. Hall himself had been swept in during the anti-Bush Democratic wave in 2006. In the 2000s, the district went invariably with the political tide, putting it squarely in the “swing district” category.

Hayworth is now facing off against Sean Patrick Maloney, a former aide to President Bill Clinton, who beat four other candidates in the June Democratic primary. Hayworth enjoys a significant cash advantage, having nearly twice as much on hand as Maloney. But as both parties have vowed to make a play for the seat, the money scenario could see greater parity.

The other high-stakes race is for Rep. Kathy Hochul’s seat. Among Democrats, none look more vulnerable before and after redistricting than Hochul. She’d won an upset special election victory over state legislator Jane Corwin after Republican Rep. Chris Lee resigned last year. Republicans represented the former version of the 26th Congressional District, crossing the mostly rural area between the Rust Belt cities of Buffalo and Rochester in Western New York, for decades. They enjoyed a 30,000-person registration over Democrats.

Then the federal judge redrew the district, giving Republicans an even greater enrollment advantage by removing parts of the heavily Democratic urban areas. Cook rates Hochul’s district as plus-seven Republican, the largest partisan measurement of any of the contested seats.

She’s facing off against Republican Chris Collins, the former executive for Erie County, where most of Hochul’s district lies. Hochul has a massive war chest advantage over her opponent, with over $1.2 million on hand at the end of June. But for similar reasons to the Hayworth-Maloney race downstate, Hochul’s seat is far from secure. No surprise then that, over the past year, she has moved to the right of her party on issues like Obama’s healthcare law, which she voted with Republicans to repeal portions of shortly after coming to Congress.

Elsewhere, Democrats are eyeing Rep. Ann Marie Buerkle’s Syracuse-based seat. She won in the 2010 wave with less than 600 votes. Her district flipped from a slight Democratic enrollment edge to a Republican one. The man she beat, former congressman Dan Maffei, is back and looking to reclaim his seat. Each candidate is well-funded heading into the fall.

Republicans are looking to the next district over. Rep. Louise Slaughter, who’s been in office since 1993, is being challenged by Monroe County executive Maggie Brooks who, despite a number of scandals within her administration, is widely popular. Democratic enrollment took a hit during redistricting, but they retain a slight edge. Slaughter retains a marginal fundraising advantage over Brooks, but not an insurmountable one.
These races plus the four other seats Cook has identified — Democrat Tim Bishop out on Long Island; Democrat Bill Owens, a moderate from rural upstate; Republican Chris Gibson, who represents the former district of New York Sen. Kirsten Gillibrand; and Republican Michael Grimm in New York City — are the districts most in play. For Republicans, simply retaining the gains of two years ago would be a major win, both in the state and nationally. And they’re confident that they’ll even pick up new seats. “They’re more likely to pick up two than lose two at this time,” said New York Republican consultant Susan Del Percio.

It is the Democrats who have arguably the more difficult task. They have to regain at least a few of the seats they lost while protecting the ones they hold. This means getting some breaks in vulnerable races -- like Slaughter fending off Brooks or Hochul pulling off an even more impressive surprise victory. They’re hoping that President Obama’s tailwinds will lift them.

Obama should hope so too: If voters across New York don’t decide to give Democratic candidates a chance in Washington there’s little chance Democrats nationally will stand a chance of regaining the House.