The smell of panic

If this summer had gone the way Mitt hoped it would, he'd never be teaming up with Paul Ryan today 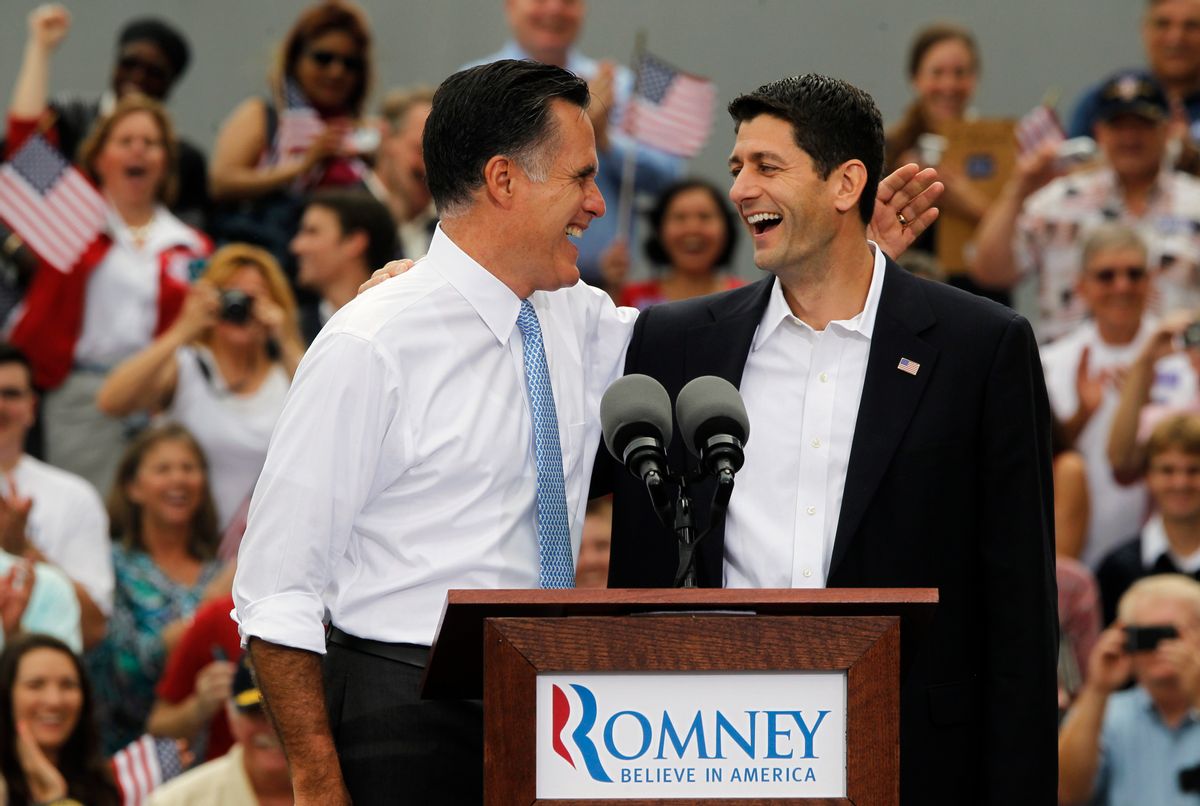 The most important thing to know about Mitt Romney’s running-mate choice is this: It’s not the move he would have made if the campaign was going the way he hoped it would.

Until now, the Romney strategy has been relentlessly single-minded. He’s had no interest in articulating or embracing specific policy proposals and has generally shied away from saying or doing anything that anyone might find at all unsettling. More than any other candidate in recent history, he has strained to be generic, someone positioned to serve as a protest vehicle for swing voters who are inclined to vote President Obama out.

At the heart of this strategy was a belief that the dreary state of “Obama’s economy” would by itself be sufficient to bring about a Republican White House restoration. Bring every reporter’s question, every Obama attack, and every story in the news back to the stubbornly high unemployment rate and that would give voters reason enough to check his name off.

But it’s been a few months since Romney locked up the Republican nomination, and in that time a few things have become clear.

One is that a significant chunk of swing voters seem willing to consider the state of the economy in context – specifically, the context of what President Obama inherited and from whom he inherited it. Polls continue to show that Americans hold George W. Bush more responsible for today’s economic conditions than Obama. The memory of the meltdown of 2008 and the terrifying free fall that was playing out as Obama was being sworn in has earned the president something of a benefit of the doubt, leading to an approval rating and a head-to-head standing against Romney that are both stronger than they probably should be.

At the same time, Romney’s quest for generic-ness has been undermined by a series of attacks, controversies and self-inflicted wounds. The Obama campaign and its super PAC allies have spent heavily on ads that portray Romney as a heartless corporate raider whose own privileged top-1 percent lifestyle has blinded him to the suffering of blue-collar and middle-class America.

He’s also faced demands from Democrats, the media and even some members of his own party to release more tax records, and his refusal to comply has stoked talk that the missing information is even more politically toxic than what Romney has already put out.  There was also Romney’s recent overseas tour, a trip designed to make the public comfortable with the idea of him representing the country on the world stage. Instead, though, it produced day after day of brutal headlines.

The effect of this has been to saddle Romney with alarmingly high unfavorable numbers in polling and to prevent him from pulling even with or ahead of Obama in the horse race. In fact, there are hints in the last week that Obama is beginning to widen his lead, with three recent national polls putting the president ahead by 7, 7 and 9 points. This, in turn, has stirred concern among Republicans and led many of them to call on their presumptive nominee to use the V.P. pick to make a bold statement that might shake up the race.

And with his choice of Paul Ryan, Romney has heeded those calls. Many things can be said about the Wisconsin congressman, but he is not at all the running mate that a generic presidential candidate would tap. If the race was now a dead heat or if Romney was ahead, you can bet he’d be going with Rob Portman or Tim Pawlenty or some other safe, do-no-harm option for his No. 2 slot. If you’ve got a good thing going, why mess with it?

But the generic strategy isn’t working for Romney, or at least it doesn’t seem to be. The Ryan pick represents a new approach: Make the campaign about a Big Idea – in this case, the radical reimagining of tax policy and spending priorities that Ryan has proposed in the name of deficit reduction. Whether Romney now runs specifically on Ryan’s budget blueprint or some revised version of it doesn’t really matter. For the rest of the campaign, he and his running mate will be answering for the social safety net cuts, Medicare voucher-ization and steep tax cuts for the wealthy that Ryan has called for.

To say this is politically risky is an understatement. The Democratic strategy to win back the House this year involves pinning the Ryan budget to every Republican candidate, and Obama has been itching to make the fall race a competition between his priorities and those of Ryan’s plan. The hope for the Romney campaign is that they’ll be able to turn the tables on their opponents by presenting the GOP ticket as a team of unusually serious and courageous policy leaders who are willing to tell hard truths about the country’s fiscal predicament.

There are endless reasons to doubt this will work. The toxicity of the Ryan budget has been tested (on a small-scale, granted) before, and the results weren’t good for the GOP. Which is why, more than anything else, this is a huge risk for Romney – a risk he wouldn’t be taking if this summer hadn’t gone so poorly for him.