What you need to know about Ryan's budget

Rep. Paul Ryan is at the top of the GOP. Here's what you need to know about the budget that got him there 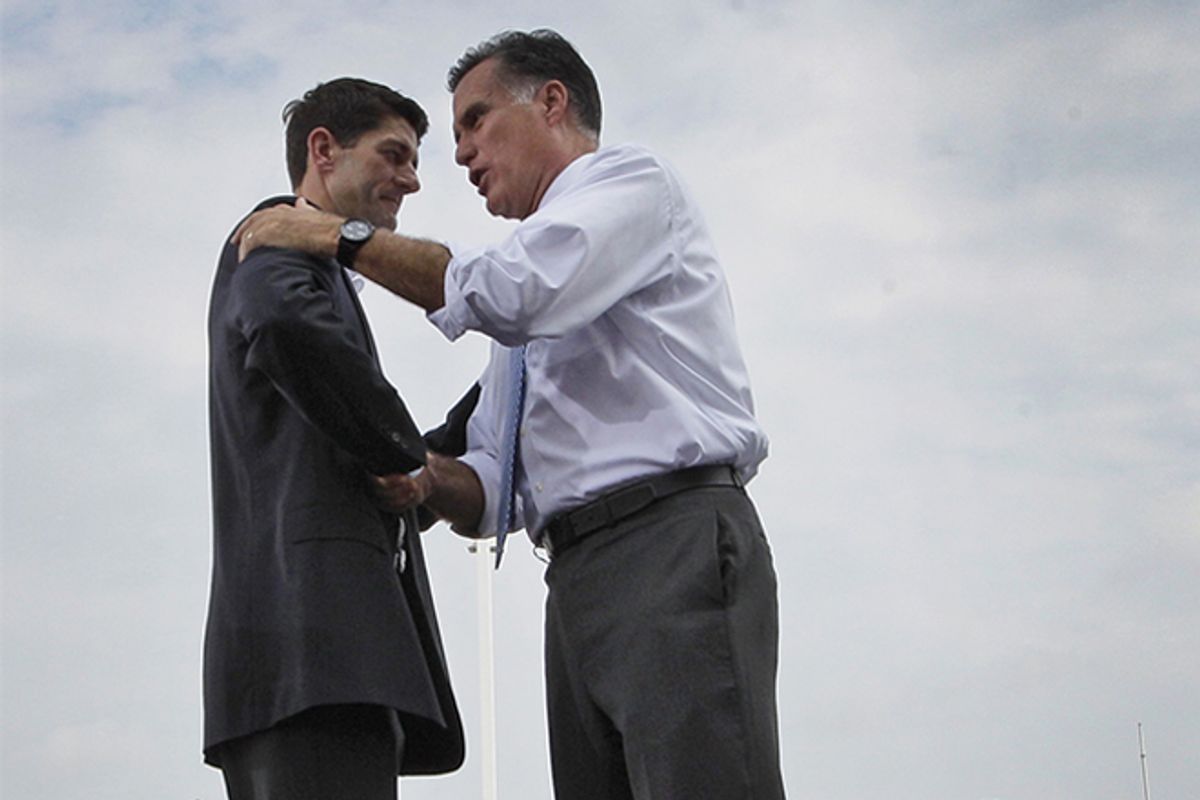 Mitt Romney’s pick of Rep. Paul Ryan for his vice-presidential nominee will reopen the debate on the Budget Committee chairman’s all-important budget proposal. Ryan’s budget, a massive 10-year plan that makes fundamental changes to a host of critical government activities, has been twice approved by the Republican-controlled House on party-line votes, while the Democratically controlled Senate has rejected it. Romney has said he will propose his own budget plan, but he has repeatedly praised Ryan’s plan in the past, so it stands to reason that the plans will look similar. Here’s what you need to know about the Ryan budget.

First, and perhaps most important, the budget would drastically change social safety net entitlement programs, shifting them away from the guaranteed benefit programs we know today to voucherized plans. The idea is to give people more flexibility on healthcare and retirement savings, but the effect could be far more severe. For Medicare, Ryan’s plan phases out the single-payer system that currently exists and replaces it with a “premium support system,” which essentially provides seniors with subsidies to purchase their own healthcare. But the vouchers are indexed to the growth of the economy, plus a little bit, while the cost of medical care has historically grown at much faster rates, meaning that over time, the vouchers will fall increasingly short of meeting the medical cost needs of seniors. This will save the government money, but shift costs back to seniors and undermine the original goals of Medicare.

On Social Security, Ryan’s budget is vague, but he released a separate plan that called for a semi-privatized scheme. Ryan, like many Republicans, paints an overly bleak picture of the safety net program’s finances in order to justify massive cuts. But Social Security is not going broke, so it starts from a false premise. Voters rejected a privatization scheme when George W. Bush pushed one because it makes the system far less stable, exposing retirement savings to the volatility of the markets, and can disproportionately help the wealthy.

Secondly, on taxes, Ryan’s budget would likely again disproportionately help the wealthy.  Like Romney’s tax plan, it doesn’t state this outright, but clearly has to have this effect. As Seth Hanlon, a tax policy expert at the liberal Center for American Progress explained, “It’s a matter of simple math. Any tax plan that purports to hold revenues steady while massively cutting taxes for the rich must make up the lost revenue by raising taxes on people who are not rich.” Ryan calls for cutting taxes on the wealthy and others, but doesn’t explain how to make up the difference.

The Tax Policy Center, a joint project of the Urban Institute and the Brookings Institution, found that Ryan’s budget would give people that make more than $1 million a year an additional $265,000 tax cut, on average, on top of the $129,000 cut they get from the budget’s extension of the Bush tax cuts for the wealthy. Meanwhile, Ryan does nothing to close the loopholes that could generate some of the revenue to make up for his new revenue losses from tax cuts on the wealthy, such as the roughly $4 billion a year in tax breaks oil companies get.

Because it fails to raise revenues, the Ryan budget would also shift costs to state and municipal governments, which are already struggling after being hammered during the recession. These governments would thus be forced to raise their own taxes to meet the increased demand, effectively laundering tax increases so Ryan doesn’t get blamed for them.

Third, the Ryan budget makes trillions of dollars in cuts over 10 years. These disproportionately hurt poor people. According to analysis from the Center for Budget and Policy Priorities, 62 percent of Ryan’s cuts come from food stamps, Medicaid and a handful of other programs aimed at helping the most vulnerable in society.

And finally, a significant portion of the rest of his cuts come from education, both K-12 and higher ed. The plan groups education with several related programs into one budget function, which would together be cut by about 20 percent from FY 2012 levels. So we don’t know exactly how much Ryan’s budget would cut from education yet (that would come later in the appropriations process), but it appears significant.

The program would also slash funding for Pell Grants, refocusing the program on “truly needy” students. This would likely deprive a huge swath of students in the middle who are too poor to qualify for grants but not wealthy enough to afford college outright. There are other cuts as well to higher education and financial aid.

Perhaps it’s no surprise then that Romney has been quick to distance himself from the budget, even while embracing its author. His campaign distributed talking points to reporters today stating, “Gov. Romney applauds Paul Ryan for going in the right direction with his budget, and as president he will be putting together his own plan for cutting the deficit and putting the budget on a path to balance.”