American politics: Too crazy for the movies

"The Campaign" presents American politics as an empty, vulgar, corrupt farce. If only it were that simple 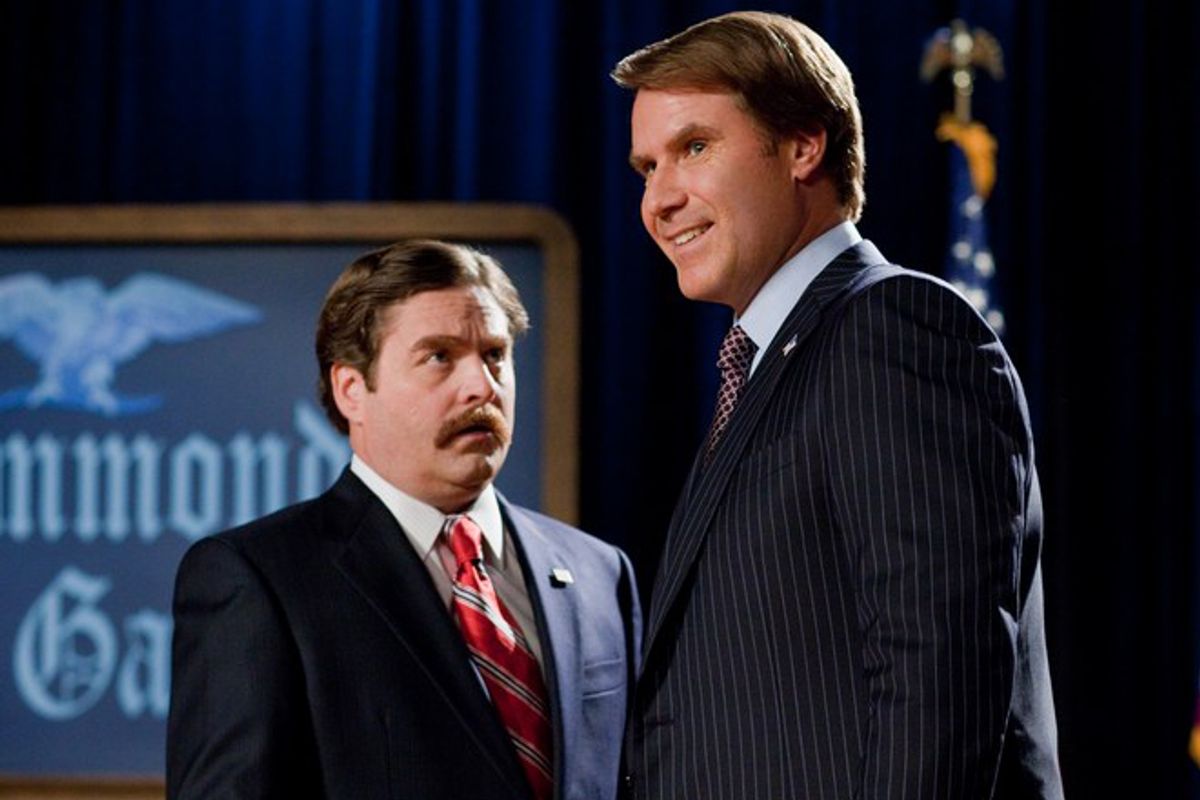 Zach Galifianakis and Will Ferrell in "The Campaign"
--

In the "The Campaign," Will Ferrell plays a Congressman who punches a baby, severely injures Jean Dujardin's dog from "The Artist," and sleeps with his opponent's wife (recording the sex to use in a campaign commercial). And none of that is half as weird as what really happens in American politics. If movies about electoral politics notoriously fail to capture the surreal quality of the genuine article, it’s not because they go too far. As all the attempts to render Sarah Palin as a comic or dramatic character have established, no screenwriter could have dreamed up such an unparalleled blend of daffiness, self-confidence, stupidity and menace. Any fictional Palin -- even one who perfectly captures the malapropisms, the mama-grizzly bluster, the thinly veiled racism and the mind-blowing ignorance and incuriosity of her worldview -- misses the essential terror of the real McMuffin. Delay the 2008 financial collapse for a few weeks, throw in a couple of genius attack ads and a little Ohio electoral fraud, and that woman is a heartbeat away from the presidency right now.

Americans’ overall attitude about partisan politics is fundamentally paradoxical, in fact — which is a nearly impossible thing to satirize. We supposedly all share a distrust of politics and politicians, a strong suspicion that the whole circus is hollow and corrupt, and a dislike for all the rancor and dirty tricks and name-calling. No doubt those factors affect voter participation, and the United States has an appalling record on that issue, ranking at the bottom among established democracies. Yet the one-half or so of the population that does vote seems invested in the whole spectacle – not just the outcome, but all the twists and turns of the soap opera – to a manic, exaggerated degree. As any political consultant will tell you, the attack ads and poisonous rhetoric that we all claim to dislike work marvelously well and are essential tools of victory. If cynicism is a major force in American political life, fear is an even bigger one.

As the steady rat-tat-tat of news and commentary on cable news and the Internet makes clear, millions of people care passionately about this year’s presidential election. While the Republican base is understandably skeptical about Mitt Romney’s conservative credentials and many liberal Democrats are likewise disappointed with Barack Obama, each side appears convinced that the other guy is a satanic archangel with a nefarious agenda.

In a bizarre and ass-backward fashion, I think this is a positive sign: Despite the obviously diseased condition of American politics, we believe that power still matters and ideology still matters. Attributing fervently held beliefs to the enemy, however distorted they may be, is a way of affirming that there are substantial differences between the parties and the candidates. It’s just that we can’t always see those differences clearly in an era when elections have become stage-managed spectacles contested almost entirely on symbolic grounds. So we wind up casting Obama – a tax-cutting reform Democrat -- as an Nkrumah-style African socialist, and we label Romney – a Northeastern moderate who pioneered health care reform – as a ruthless corporate plunderer. (Yes, one of those stereotypes is less unfair than the other, but that’s not the point right now.)

No doubt it’s unfair to expect a movie like “The Campaign,” which is intermittently very funny but lacks any degree of subtlety, to get into that level of analysis. An overly broad satire about a fictional North Carolina congressional election (which feels off in many granular details), “The Campaign” has high-minded intentions, maybe too much so. In between its cable-news gags, baby-punching scandals and meaningless slogans – Ferrell’s character is running on “Family, Jesus and Freedom” – Chris Henchy and Shawn Harwell’s screenplay works overtime to deliver a message about the evils of big money in politics and the Citizens United decision. Neither Ferrell’s incumbent Democrat, a small-minded, horny Blue Dog named Cam Brady, nor Zach Galifianakis’ upstart Marty Huggins, a sweater vest–wearing small-town Republican, appears to believe in a damn thing or support any particular policy.

Huggins only enters the race as the hand-picked candidate of a villainous zillionaire duo called the Motch brothers – nope, I’m not kidding – who are played by Dan Aykroyd and John Lithgow with a degree of thundering obviousness that makes Montgomery Burns of “The Simpsons” look like an Ibsen character. You can’t blame the actors, at least not too much; Henchy and Harwell are TV comedy veterans, and director Jay Roach is a Hollywood factory technician who made “Meet the Parents” and its sequel “Meet the Fockers.” They display absolutely no feeling for the complicated dynamics of politics and opt for the easiest kind of sketch-comedy satire, where everyone involved is assumed to be acting out of narrow self-interest or unresolved daddy issues. When your movie feels crudely condescending toward such entities as David and Charles Koch and the Southern GOP, you’re really in trouble.

Simply taken as a broad character comedy, "The Campaign" definitely has its moments. Ferrell and Galifianakis are both terrific, the former as an entitled pretty-boy hypocrite in the John Edwards mode, the latter as a decent but bewildered human puppy who has yet to grasp basic facts about his own sexuality. (This evident truth is never mentioned by anyone, which is kind of a nice touch.) Dylan McDermott delivers some amusing shtick as the sleek, dark political wizard hired by the Motches to reinvent Marty as a manly American (out go the pugs and the antiques; in come the retrievers and shotguns). Ice-blond Katherine LaNasa is even better as Cam’s studio-tanned, steel-magnolia wife, who endures all the bimbo eruptions for a hypothetical shot at becoming Second Lady.

But as political satire, “The Campaign” has only hackneyed notions to express: The candidates are empty suits or phonies, bought and paid for; the electorate is dumb as a box of rocks; campaigns consist of lies and insults and invented controversy right out of reality TV. There’s a lot to be said for each of those propositions, actually, but considered as a totality, they paint way too simplistic a picture. And then there’s the upbeat “Mr. Smith Goes to Washington”-style ending that the filmmakers feel obliged to tack on, which is simply lame and depressing. No one watching this, of any political persuasion, will harbor illusions that the election of one principled person in one congressional district is likely to make any difference.

In the real world, all kinds of decent and well-meaning people have been elected to Congress, and quite a few of them serve there now, on both sides of the aisle. Yet our political life is still completely dysfunctional. And while big money is a big problem in American politics – maybe the biggest – it’s simply not true that money has replaced ideology. All the money in politics is a form of ideology, and has persistently distorted the so-called mainstream of political discourse in nuttier and more pernicious directions.

Sure, Republican power brokers eventually shoved forward a good-looking guy who believes nothing and will say anything, but along the way their party’s apparent frontrunners have included Michele Bachmann, Newt Gingrich, Rick Santorum and Herman Cain (along with Palin, before she decided not to run at all). However you want to describe those people, don’t try to tell me they lack belief. That group believes in more weird stuff than a medieval nunnery high on mushrooms. Money has driven one of our political parties crazy to the point where it can and will say anything, and it has made the other one so cowed and cautious that it says and does almost nothing. That’s a scarier vision than you’ll see in any movie.