NBC's new sitcom has lots of cute animals. Shame about the sour humans 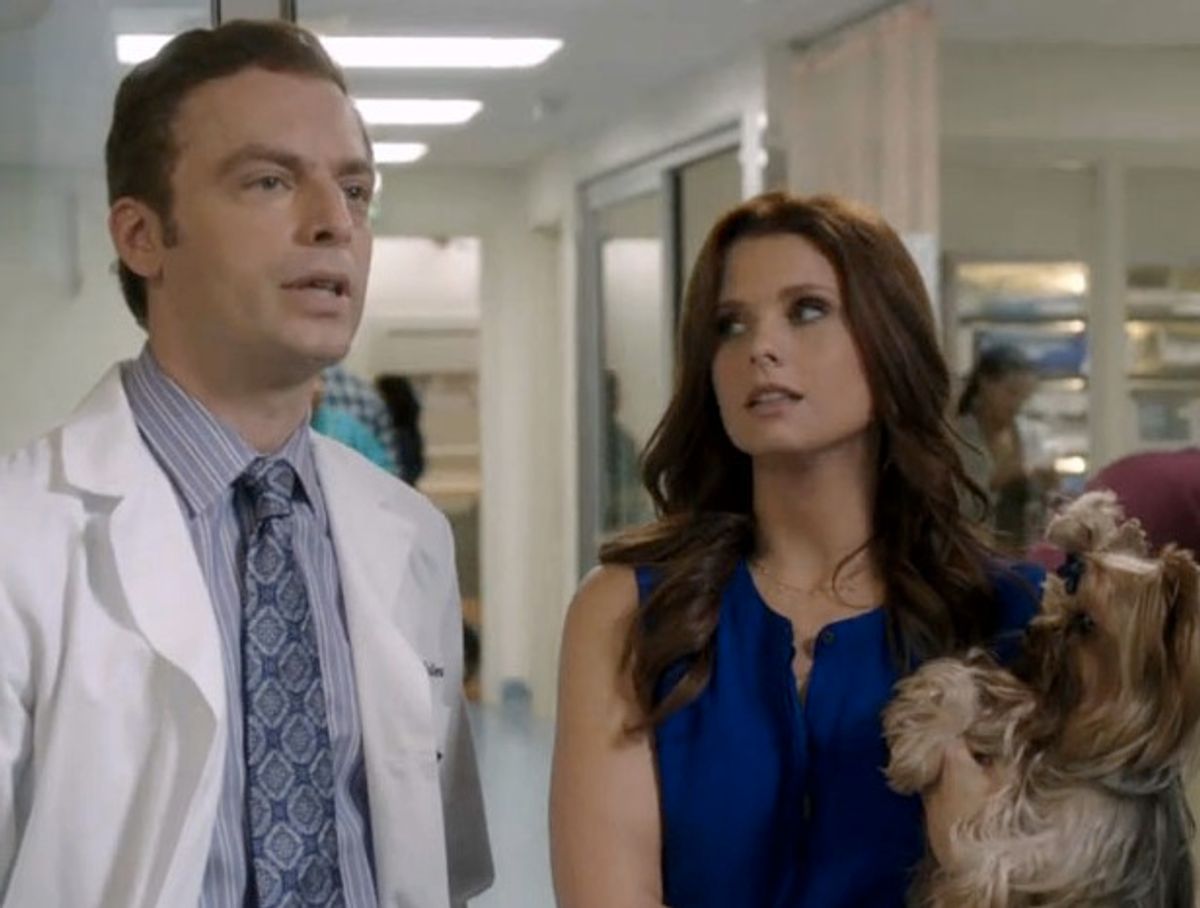 “Animal Practice,” the second of NBC’s new comedies to get a preview after the Olympics, aired last night at a pre-ordained time, thus pre-empting part of The Who’s closing ceremony performance. The Spice Girls, supermodels strutting and Russell Brand singing The Beatles are all tough acts for a sitcom pilot to follow — it’s not easy reaching such a high level of intentional-accidental humor and pathos — but anger, even if it's just about the interruption of a set by The Who, is a pretty solid state of mind to begin watching “Animal Practice” with. Not because the show is infuriating (or not because the show is more infuriating than most pilots), but because it has a biting, sour streak. It's a show about Dr. Doolittle if Dr. Doolittle were a smug cad. Watching this show in a heart-warmed, universe-loving, Olympic state of mind would have been the wrong way to begin. Mildly incensed is about right.

“Animal Practice” stars Justin Kirk as the unsexily named George Coleman, a veterinarian who loves animals and sex and doesn’t much go in for people. “My system may not be perfect, but I save a lot of animals and meet a lot of girls,” George tells his ex-girlfriend and new boss Dorothy (Joanna Garcia), before reconsidering: “My system is perfect!” As an actor, Kirk (“Weeds,” HBO’s “Angels in America,” “Modern Family”) has a spikey, sardonic, intense vibe. His characters usually have a bad attitude: They’re the guys who say the really mean, really accurate, really funny thing behind your back, and who can't stop themselves from doing so. Turning it off or dialing it down is the one thing they can’t do. His Coleman is another such type, an emotionally cool know-it-all who pretends not to care but, of course, cares too much, regularly getting aggravated by his fellow humans and giving his expressive eyebrows a serious work out.

Coleman works at an animal hospital staffed by a bunch of sitcom-ready misfits who alternately live in fear of him, take part in outlandish animal activities with him and seek out his advice. (His advice is usually based on animal behavior, a gimmick previously showcased in, among other places, an Ashley Judd rom-com.) In last night’s episode, they were joined by Dorothy, George’s new taskmaster and past (and presumably future) love interest, a person who wants to bring organization and a no-people-hating ethos to the animal hospital.

The role of Dorothy was recast with Joanna Garcia after the pilot was shot. I’m a huge fan of hers, and have been since the too-short-lived CW show "Privileged" (which I recommend!), but she seems to have less chemistry with Kirk than did the original actress. While that can't be intentional, there is a an upside: George and Dorothy are given a pretty serious will-they-won’t-they set up, complete with one of the supporting cast members sassing them -- “Am I the only one who can sense the sexy tension?” (Though from where I was sitting, it didn’t seem like they had much "sexy tension.") In the first version of the pilot, Dorothy had a fiancé, a hurdle helpfully removed by last night’s episode. But with Kirk and Garcia’s reduced chemistry, stringing their relationship along for the entire first season won’t be as annoying and implausible as it would have been if their rapport was explosive.

Given time, that connection will probably improve, just as Coleman’s aggressive “I'm a jerk but not deep down!” vibe will mellow. And there were a couple of promising moments in the pilot: a “Cats” joke (More Mr. Mephistopheles punchlines, please), the way the animal hospital is filmed like it’s County General from "ER", a charismatic supporting cast of oddballs who avoided any totally dud line readings, and -- of course -- that monkey. If the show pulls back on the sour humans a bit and keeps it up with the cute animals, it might have something.