Paul Ryan is not a game changer

Don't buy the media hype. Ryan simply espouses GOP orthodoxy, and the 2012 election will look like all the others 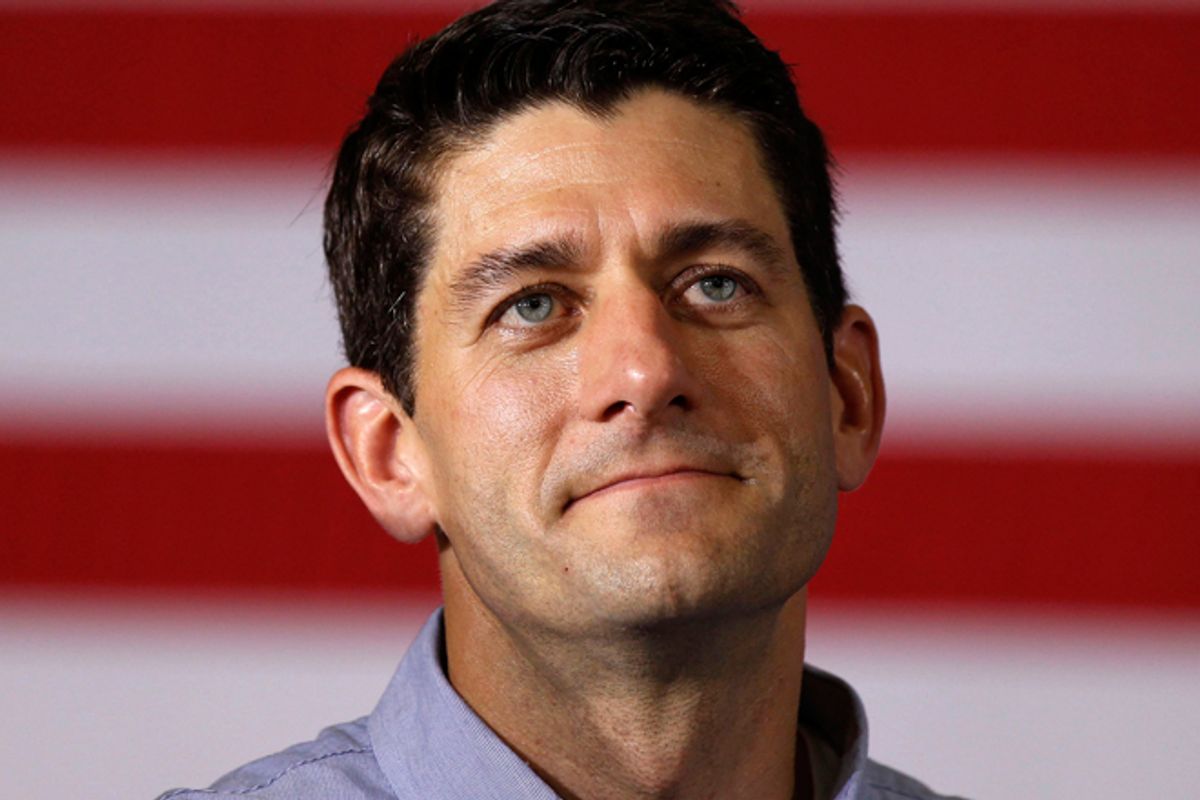 Is Mitt Romney’s selection of Wisconsin Representative Paul Ryan a game changer? Everyone seems to think so. Conservative Republicans are jubilant now that one of their own is on the GOP ticket. Democrats are also exultant because they hope to use Paul Ryan’s plans to voucherize Medicare and block-grant Medicaid to frighten seniors into voting for Obama. Whether they love Ryan or detest him, everyone agrees he is a game changer.

I beg to differ.

To begin with, Paul Ryan looks an awful lot like Dan Quayle in 1988: He's a relatively young Midwestern member of Congress chosen by a moderate Northeastern Republican presidential candidate to appease the right. Ryan may be able to spell “potato” and he may do better in debate than his ill-fated predecessor, but the parallels between Romney/Ryan and Bush/Quayle are striking.

If you want another parallel, you can find one in the McCain/Palin ticket. In 2008, as in 2012, a relatively moderate Republican presidential candidate opposed by his party’s conservative base put a right-wing favorite on the ticket. No news here, folks; move along.

We are supposed to believe that the selection of Ryan abruptly turns the 2012 election into a debate on the first principles of American government because of the radicalism of the budget that Ryan proposed and that the House Republicans passed. But the conventional wisdom is wrong.

To begin with, Ryan’s budget is not original. It is merely the restatement of conservative orthodoxy going back to Reagan. The Ryan budget would cut taxes for the rich, voucherize social insurance or turn it over to the states, and increase defense spending while relying on unspecified future cuts to prevent massive deficits.

Haven’t we heard all of this before? Hasn’t this been the standard Republican orthodoxy since the 1980s? And wasn’t this going to be the Republican economic agenda anyway, no matter who was nominated as Romney’s vice president? There aren't any moderate Rockefeller Republicans, with their more centrist budget plans, to be found in today’s GOP. The Democrats may benefit from putting Paul Ryan’s face on right-wing economic ideology, but Romneyomics is just a re-run of Bushonomics and Reaganomics long after the serial jumped the shark and should have been cancelled.

Nor will the election be a debate between two opposed visions of political economy. Such a debate would thrill policy wonks and political philosophers, but it is not in the interest of either candidate.

In the months between now and the general election, expect Romney to distance himself from the elements of the Ryan plan that are most likely to frighten senior voters and others. All that Romney and Ryan need to do is insist that under their plan, the resulting economic miracle not only will fund all middle-class needs into the twenty-second century but also will enable every American to have a pony. A thousand budget experts can swear on a stack of official reports that the numbers do not compute and the ponies cannot be found, but it doesn’t matter. In the “he said/she said” world of the mass media, numbers and expertise don’t count. Candidates whose budget numbers do not add up merely need to insist that, yes, they do too add up, and that is good enough for the media and the voters. Besides, the kinds of voters who don't make up their minds until just before the election are not the sort of people who pore over budgetary analyses by Washington think-tanks late at night.

Nor is Obama likely to make the election a referendum on Swedish-style social democracy versus Goldwater-Reagan conservatism. After all, Obama is not a Progressive-Liberal in the New Deal tradition but rather a moderately conservative neoliberal in the tradition of Bill Clinton and Jimmy Carter — an “Eisenhower Democrat.” What Obama has learned from the last two Democrats to be elected to the White House is the art of positioning himself as the moderate voice of reason between the alleged extremes of the big-government left and the anti-government right. Inasmuch as the big-government left that neoliberal Democrats love to denounce is actually moderate, centrist liberalism, this puts Obama’s comfort zone, with respect to economic questions, well to the right of center.

Instead of delivering a courageous defense of generous social insurance and adequate Keynesian stimulus, Obama will almost certainly run as the candidate of authentic deficit reduction, as Bill Clinton and Walter Mondale did before him. This will play into the hands of Romney and Ryan. If the election turns into a referendum about who is the greater deficit hawk, then the Republican strategy — cut spending (especially on the poor) — is likely to have more appeal than the Democratic strategy — raise taxes (especially on the rich). In addition, Obama and the Democrats will find themselves trapped in a debate about the solvency of entitlements in the 2030s rather than programs to help most Americans today, a debate that does not play to their strengths.

Most important of all, Obama’s signature achievement, the Affordable Care Act, weakens his ability to denounce Ryan’s proposal to voucherize Medicare.

No doubt Obama will accuse Romney of being a “flip-flopper” for passing “Romneycare” as governor of Massachusetts and then denouncing Obamacare. But the more that the Obama campaign dwells on the Romneycare/Obamacare connection, the more this helps Romney. After all, he’s so smart that Obama copied his health care plan! And the more Obama defends Obamacare, a system of health care vouchers for working-age Americans, the harder it will be for him to attack a reform of Medicare cut from the same cloth. How can Obama denounce a Medicare reform based on exactly the same principles as Obamacare?

Far from being a clash of ideologies, then, the 2012 election will resemble the last half dozen or so elections. Once again, the election will pit Republicans based in the white South and the white working class against Democrats based in the Northeast, the Great Lakes region and the West Coast, as well as blacks and Latinos in metro areas across the country. Once again, a few key states and regions — Florida, the Midwest — will determine the outcome. Once again, while mobilizing his party’s base, each candidate will try to appeal to center-of-the-road voters. Romney will reassure old people that he will not take away their Social Security and Medicare, while Obama will insist that he is the genuine deficit hawk. And no matter who wins the White House in 2012, the U.S. will not adopt either Nordic social democracy or libertarian minimal government.

Now and then there are defining elections that offer voters a choice between different ideologies and that define a nation for generations to come. But not in this country, and not in this year.