As the games wind down, London puts on one last show. Here are the top 10 moments 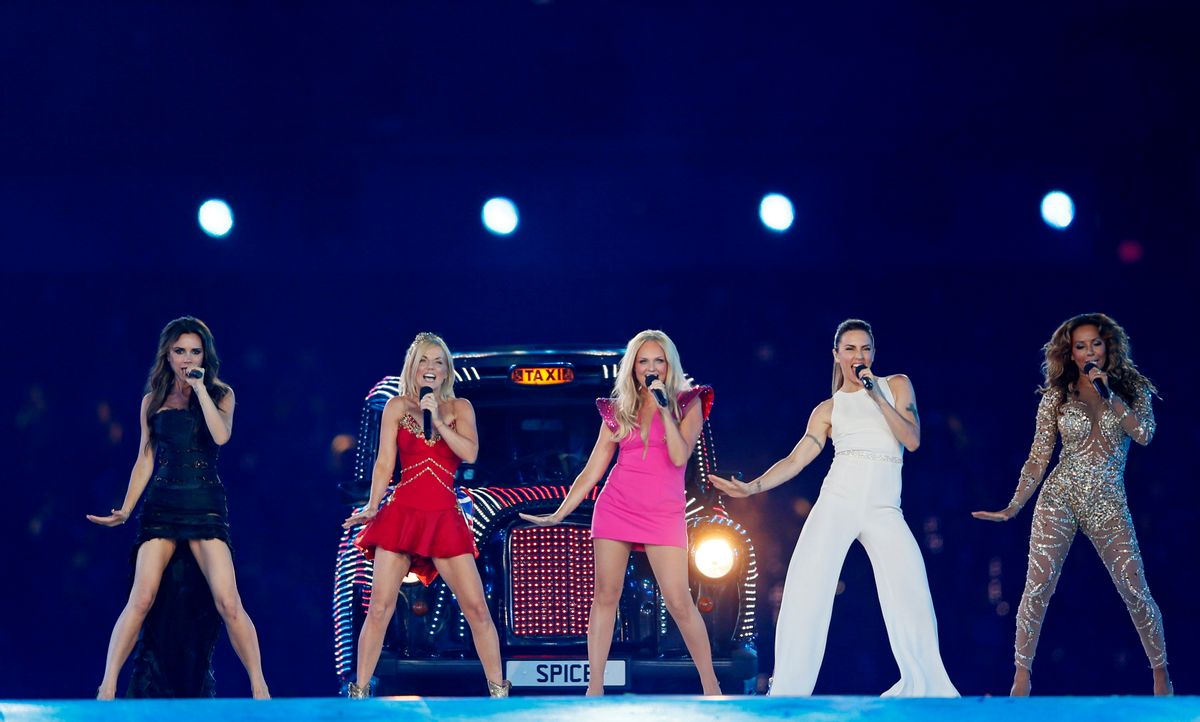 The opening ceremonies of any Olympics are a combination of grandiose hospitality and swaggering nationalism. The closing ceremonies are their reflected image. They're a big-budget adios to a world full of guests and one final chance to show everybody that, no matter how many medals it may have won or lost, the host country kicks the most righteous butt on the planet.

And so, in much the same way the opening ceremonies of the London Olympics will be remembered for Danny Boyle's unmistakably British salute to that green and pleasant land – complete with a parachuting James Bond and Queen Elizabeth – Kim Gavin's closing extravaganza was a spectacle that could only have been made in England. Beijing might have been huge on pomp, and we're sure Rio will bring its party spirit, but the U.K. really owns it in the pop stars, supermodels and quirky eccentrics department. The closing ceremonies summed up the British spirit exquisitely -- a mad mix of decorum and silliness. And after a night of royalty and Pet Shop Boys, Kate Moss and a giant octopus, and Russell Brand as the walrus, when we close our eyes and think of the empire, these are the moments we'll most remember.

Dishonorable mention: NBC cutting away before The Who's performance to force "Animal Practice" upon an unwilling American public

For this the network also sacrificed Ray Davies doing "Waterloo Sunset." We hate you so much already, monkey show. So much.

10. Timothy Spall as Winston Churchill emerging from the top of Big Ben and reprising Caliban's speech from "The Tempest" while Julian Lloyd Webber played the cello

Englishest thing ever. If that moment were any more British, it would have had an overbite.

In an evening chock full of dinosaurs (but we still love you and your skull belt buckle, George Michael!), the young pop idols sang meaningfully about "your eye eye eyes" while wincing like they were passing a collective kidney stone. Dear One Direction: You are on top of the world right now -- enjoy it. As my eight-year-old daughter observed, watching them perform, "They're not good singers. They're not cool guys. But you've got to admit that's a catchy song." Gentlemen, that's your fan base speaking.

8. The white-clad children's choir doing "Imagine" in sign language while a giant John Lennon face assembled itself in the middle of the stadium

How do you manage to make a performance that's a cliché of everything everyone has ever done with a beloved song also kind of touching and somehow jaw-droppingly peculiar? You trot out a children's choir, intercut it with vintage video of John Lennon gently singing, and then interrupt it with a pack of individuals carrying bits of a late-Beatle's visage, that's how. Yes, it was that weird.

You'd have thought this was the Olympics of cars, given the number of automotive-based production numbers the closing ceremonies mounted. But from the moment Sporty, Baby, Ginger, Scary and Posh exited their respective Spice mobiles, it was as if the 2000s never happened. The girls, who never appeared to touch, make eye contact or in any way acknowledge one another's spicy presences, roused the crowd with "Wannabe" and "Spice Up Your Life," and a vamping Victoria Beckham proved she can still out-pout McKayla Maroney. Also: Ginger in a tiara. It was the Blair era all over again.

6. The throng of Beefeaters doing "Parklife"

This place of honor almost went to Madness, who brought their classic "Our House" to giddy life and proved they're still up for aerial stunts. But did you ever once, in any of the times you've ever heard Blur's dizzy ditty, imagine a bunch of guys in big fuzzy hats marching around a mobbed stadium to the strains of "All the people! So many people!"? And now you can't picture it any other way, can you? That's what makes it brilliant.

When did that "Domino" crumpet get famous enough to earn two big musical numbers – including one that had her standing in for Freddie Freaking Mercury with the surviving members of Queen? After the show invoked the real Mercury via the big screen, Jessie J was quite a comedown. If Freddie were alive today, he'd no doubt appreciate Little Miss Price Tag's flair for belting out a tune while simultaneously rocking a tight body suit and wildly flipping her hair. But getting anywhere near the late great one's ability to rock you? That's a mud-on-face-level big disgrace. Contrast her performance with The Who's, which could still draw collective chills from Roger Daltrey's shuddery "See me feel me."

4. The lowering and carrying off of the Olympic flag

Nothing says closing time like seeing a flag come down. After two weeks of breathtaking triumphs, disappointments and drama, the fact that this extravaganza could actually come to an end suddenly became bittersweet reality. Thank heaven for those shots of the jubilant Brazilian athletes, with "Wait till 2016" written all over their faces. Thank heaven, also, that we still have Shark Week.

Beautiful music, beautiful girls, beautiful dancing, an appearance from the brilliant Seu Jorge – well, that's what you'd expect from Brazil. But when a lone figure strode onto the stage and revealed himself to be the one and only Pelé, you could feel the gasp rising up from the crowd. And the proud, beatific look on his face was one of the loveliest and most sincere pleasures of the whole London Olympics.

2. Eric Idle doing "Always Look on the Bright Side of Life"

Roller skating nuns! Bollywood musical dancing routines! Gladiators! Cannon stunts! An audience gleefully singing the memorable Monty Python tune! But if we had to pick the best moment of the performance, it'd be a dead heat between the sight of Prince Henry whistling along or Idle's big, bleeped musical declaration to the world that life is a piece of shit. Had the entire show ended right there, it would have been perfection.

1. The athletes and coaches taking pictures with their phones

Was there a cuter, more down-to-earth sight than the greatest athletes in the world, many wearing shiny medals around their necks, striding onto the field holding up their phones and cameras to merrily record the proceedings? No longer needing to sport their game faces, the athletes radiated elated, infectious school-out-for-summer relief. Running in and out of one another's paths, stopping to pose for one another, the participants put on a display of pure, sweet wonderment. The dazzlers became the dazzled, and for a brief time, we were all united in awestruck delight.