Don't ask about his taxes, either

Like Romney, Ryan says he'll just release two years of returns. But can they get away with it for three months? 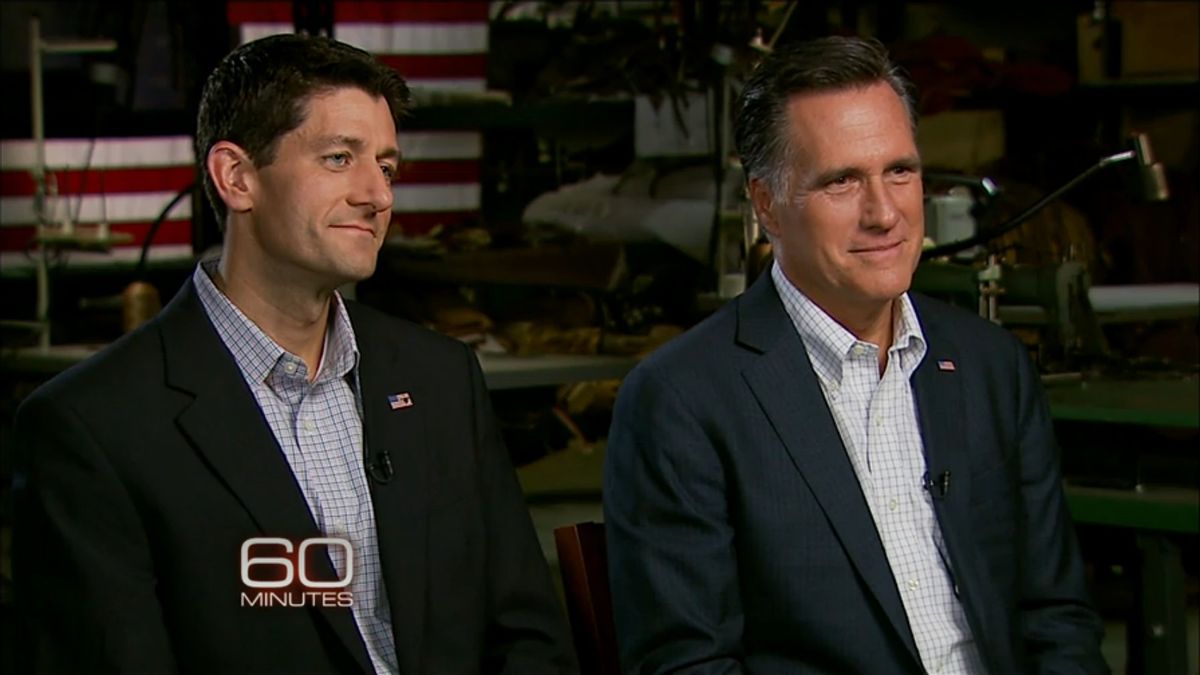 The Romney campaign made sure Paul Ryan was ready with an answer to the question everyone knew Bob Schieffer would ask in Sunday night’s “60 Minutes” interview: How many years of tax records did you provide during the V.P. search?

"It was a very exhaustive vetting process,” Ryan responded. “It’s a confidential vetting process, so there were several years. But I’m going to release the same amount of years that Governor Romney has.”

"And that would be how many?" Schieffer asked. Ryan replied,

Two. I’m going to be releasing two, which is what he’s releasing. What I hear from people around this country – they’re not asking, "Where are the tax returns?" They’re asking where the jobs are. Where’s the economic growth? Those are the issues that matter.

I think these are more or less distractions to try and take us off the fact that the president has given us failed policies that aren’t working, that are putting us deeper into debt, that are costing us jobs. So we’re going to focus on what it takes to turn this economy around and put people back to work.

And that was it, at least in the version of the interview that aired on CBS.

The question is whether this will fly with the press and the general public. So far, if there’s been one clear benefit for Romney of his V.P. selection, it’s that there’s been a sudden and sharp decline in coverage of Romney’s refusal to put out more than two years of tax returns. The days leading up to the Ryan news were dominated by Harry Reid’s ruthless but effective use of hearsay to advance the suggestion that Romney paid no federal income taxes for 10 years. It was beginning to seem like Romney would be haunted by the subject through November. Since Friday night, though, there’s been nary a mention of the majority leader and his unsubstantiated claims.

It’s been established that in 2008 Romney provided John McCain with 23 years of tax records when he was being vetted for the No. 2 slot. As a candidate this year, though, he’s released his returns only for 2010, along with an estimate for 2011 (and a promise to follow up with the full return when it’s available). Those documents were damaging enough for Romney – he’s still being dogged by revelations about Swiss bank accounts, offshore activities and his own effective tax rate of 13.9 percent – and the suspicion is that records from previous years would include similar, maybe even worse, information.

There was nothing surprising in the answer Ryan gave Schieffer. Obviously, he was going to avoid saying that Romney had demanded to see more materials from him than Romney is willing to make public, and obviously the campaign isn’t about to put out five or 10 years of Ryan’s returns when it’s so insistent that only two years of Romney’s will be made available. But this was only the first time the question was asked. It remains to be seen if others in the media will pick up the same questions and pursue them aggressively, returning the subject to prominence. It also remains to be seen if Reid – or someone else -- will launch a new round of inflammatory accusations.

Ryan’s selection also creates a new tax question for Romney. As the New Republic’s Alec MacGillis pointed out over the weekend, Ryan’s own budget plan calls for zeroing out the capital gains tax, something that Romney himself opposed during the GOP primaries. The reason Romney was reluctant to endorse it: Virtually all of his own income is from investments, so without a capital gains tax, his effective rate would plummet to almost nothing. Politically, that would be far more problematic than explaining the 13.9 percent rate he now pays. Schieffer didn’t ask Ryan why he thinks Romney should be allowed to pay such a low rate, but the question figures to come up in the days and weeks ahead.