What Pelosi and Romney have in common

They both see Paul Ryan as their deliverance, but for very different reasons 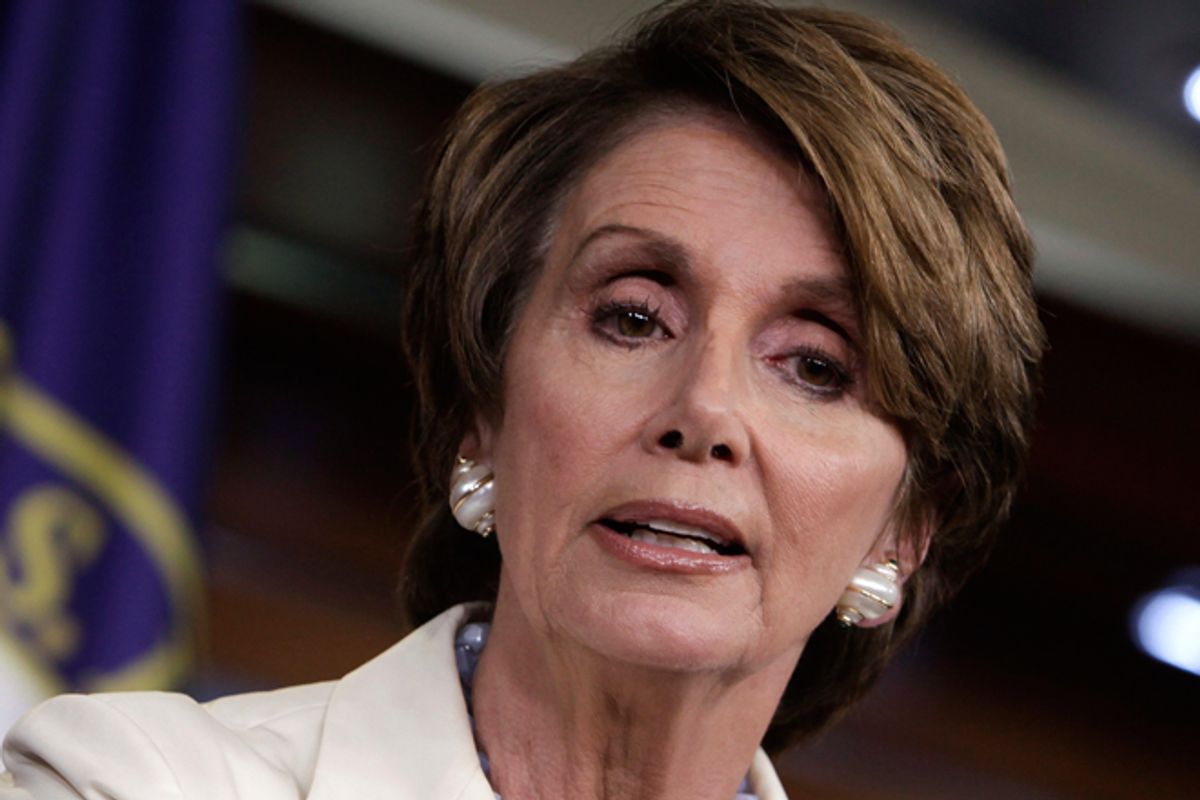 Mitt Romney and Nancy Pelosi have something in common: They both see Paul Ryan as the key to shaking up a campaign that wasn’t going the way they’d hoped it would. But instead of worrying about the presidential race like Romney, it’s the battle for control of the House that’s foremost on Pelosi’s mind. And up until now, things haven’t looked promising for her side.

Democrats need a net gain of 25 seats this fall to win back the lower chamber. There was a moment last year when pulling it off seemed plausible, but several developments since then have drastically diminished the Democrats' odds.

The first involves the economy, which hasn’t gotten worse since the spring and summer of 2011 but hasn’t exactly roared back to life, either. This has made it very likely that the presidential race will be close; and the closer the race is, the weaker President Obama’s down-ballot coattails figure to be.

Then there’s redistricting: Thanks to their midterm landslide in 2010, Republicans controlled the process in a number of key state houses, producing redrawn maps that manufactured a bunch of attractive pick-up targets for the GOP, some of them all but impossible for the party to lose.

The third factor is the rise of super PACs. If the pronounced financial advantage that Republicans enjoy on this front is going to be felt, it probably won’t be at the presidential level; it will be in congressional races, where candidates tend to be anonymous, news coverage is sparing and heavy spending can have a truly distortive effect.

Add all of this together, and Democrats were staring at a gain of a handful of seats, at best, and maybe even the loss of a few under a worst-case scenario. Of the 25 seats National Journal ranks as most likely to change partisan hands, more (13) are now held by Democrats than Republicans. So Pelosi, much like Romney, entered August increasingly in need of some sort of jolt. And with Ryan’s pick, she got it. Or at least she hopes she got it.

After all, it was Ryan who was the main reason for those few months last year when Democrats believed a House takeover was within their reach. It was on April 15, 2011, that the GOP House passed Ryan’s original Medicare plan, which called for voucherizing the wildly popular social safety-net program. (Ryan has since revised the plan to make it more politically palatable.)

Some were initially confused over why Republicans would do this, given the plan’s obvious political toxicity and the nonexistent chance that it would clear the Senate and be signed by President Obama. But the answer was obvious: In the Tea Party era, it’s true believers like Ryan who set the party’s policy agenda, with any Republican who seems less than enthusiastic about it exposing him or herself to a serious primary challenge (or, in the case of Speaker John Boehner, an intraparty coup).

The House GOP’s embrace of Ryan’s plan led directly to a major political upset: On May 24, 2011, Democrat Kathy Hochul won a special election victory in a western New York House district that had voted for John McCain in 2008 and hadn’t sent a Democrat to Congress in four decades. This marked the peak of Democratic optimism about their party’s 2012 House outlook. As Pelosi said at the time, Democrats had discovered a very simple strategy: “Our three most important issues: Medicare, Medicare and Medicare.”

And, by and large, Democratic House candidates have been trying to run on Medicare and to play up the broader budget blueprint that Ryan presented and the House GOP endorsed earlier this year. But they’ve had to compete for attention with all sorts of other issues, and the above-mentioned developments have severely complicated their strategy, too. For Pelosi and House Democrats, the promise of Ryan’s selection is that it will force the very issue they have wanted to be talking about since early 2011 to the top of the national campaign agenda.

As an optimistic memo from the Democratic Congressional Campaign Committee argued on Sunday, “From national polling, and after testing this issue in Republican-leaning districts during special elections, it’s crystal clear this will be a defining issue in Congressional races across the country, and House Republicans can’t escape the political devastation it will cause them.”

But while Ryan’s selection is good news for House Democrats – it lets them run the campaign they’ve wanted to run – their challenge is still steep, maybe prohibitively steep. For one thing, when you factor in the low-hanging fruit that redistricting yielded for Republicans, the number of GOP seats Democrats really need to win over is more like 35.

Plus, we’ve seen an election like this before. In 1996, Bill Clinton ran for reelection against a far-right GOP House and its plan to cut Medicare. The issue was effective – nearly 20 House Republicans lost their seats – but Democrats still only managed a net gain of nine seats. And that was with Clinton cruising past Bob Dole by eight points at the top of the ticket – a margin that no one expects Obama to approach.

Go back even farther and history is even more discouraging for Democrats. In 1984, Republicans picked up just 16 House seats even as Ronald Reagan won reelection by 18 points. And in 1972, the GOP gained just 12 even as Richard Nixon held George McGovern under 40 percent nationally. You have to go all the way back to 1964 to find a reelected president with coattails the size that Democrats are looking for this fall. That was with LBJ crushing Barry Goldwater by 23 points nationally – and by a far, far worse spread in the Northeast, where Democrats made their biggest House gains that year.

In other words, the odds are still very much against Democrats emerging from this year’s election with the complete control of Washington that voters handed them in the last one.