Why conservatives obsess over flash mobs and "race riots"

How and why the right suddenly became very, very frightened of black people 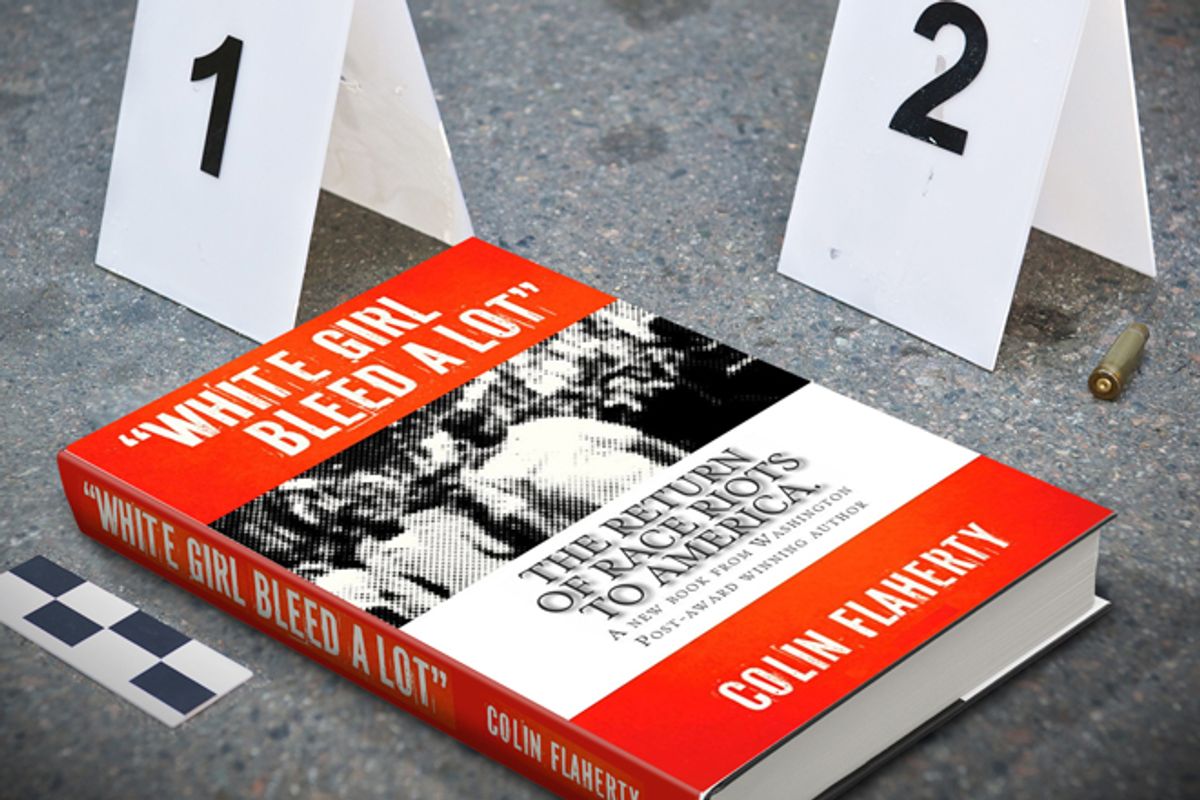 We get a lot of unsolicited batshit racist email here at Salon HQ, as pretty much all media outlets do, but this one -- which went to just about everyone on staff in one form or another -- was a good example of not really crafting a message that will convince or appeal to your chosen audience:

Thomas Sowell says he did not know how bad racial violence really was until he read "White Girl Bleed a Lot: The Return of Racial Violence to America and How the Media Ignore It."

Reading Colin Flaherty's book made painfully clear to me that the magnitude of this problem is greater than I had discovered from my own research. He documents both the race riots and the media and political evasions in dozens of cities across America.

A good recent example of this is from a few weeks ago: The Fourth of July.

All in one day. There'a a lot more.

(That was an email from "Dan Auld." An identical email from "Margie Warren" was sent to our Laura Miller. Let's assume both are Colin Flaherty.)

Anyway, sure, it sounds like a story, but not quite the story "Dan" pitched. (Eleven incidents in one day! On one day when nearly everyone in America didn't have to work or attend school! Eleven separate incidents in a country of 300 million people!) It's actually the story of how and why the right suddenly became very, very frightened of black people.

So, this Flaherty guy is pretty sure that there's a black crime wave going on, and also that there is a conspiracy -- by the media and the police -- to cover up this crime wave by not always pointing out when the perpetrators of crimes are black. His evidence? YouTube clips and newspaper comment sections, mostly. The book seems to be a collection of literally every single crime Flaherty could find, over the last few years, involving black perpetrators and white victims (though some involve incidents where the victims were black, and in many incidents the "victim" was property owned by white people), plus a lot of material on roving, rampaging gangs of black teenagers. Exciting stuff! Look, Thomas Sowell loved it, because it shows how dangerously close we are to an actual racial civil war:

In the middle of the 20th century, Sri Lanka had a level of mutual respect and even friendship between its majority and minority communities that was rightly held up to the world as a model. Yet this situation degenerated over the years into polarization and violence that escalated into a civil war that lasted for decades, with unspeakable atrocities on both sides.

All it took were clever demagogues and gullible followers. We already have both. What it will take to nip in the bud the small but widely spreading race riots will be some serious leadership in many quarters and that rarest of all things in politics, honesty.

Race hustlers and mob inciters like Al Sharpton represent such polarizing forces in America today. Yet Sharpton has become a White House adviser, and Attorney General Eric Holder has been photographed literally embracing him.

I've never been entirely clear on the definition of the right-wing epithet "race hustler" (it usually seems to mean "a black person who talks about racism"), but I'd figure a person writing a silly book designed solely to scare white people would qualify.

So here's the thing: If you look for every example of crimes committed by black people in every American city over the last three to five years, you'll find enough examples to make it sound like a lot of crime, because America is a violent country with a lot of crime, a lot of poverty and a lot of impoverished minority neighborhoods located conveniently close to much wealthier white neighborhoods (and business districts where everything is also owned by white people).

But this epidemic of racial crime isn't an epidemic. It's barely a blip. According to the FBI, there were 575 crimes motivated by anti-white bias in 2010, nationwide. There were 545 anti-white crimes in 2009 and 716 in 2008. There were more than 2,000 crimes motivated by anti-black bias in each one of those years. Of course, the book insinuates that all black-on-white crime is racially motivated, but even by that standard things are looking pretty rosy in America right now.

The violent crime rate has been plummeting since its peak in the early 1990s, which now looks like the crest of one of America's periodic (and slightly mysterious) waves of violent crime. (In the long term, the homicide rate has been steadily falling for hundreds of years. We are genuinely much more civilized now than we used to be.) Back when this country actually had race riots, and not just large gangs of kids briefly fighting and scaring white people on summer nights, there were ... actual race riots, motivated by racial tensions. It's absurd to imagine a secret pandemic of black-on-white violence motivated by anti-white racism that the media and all of our law enforcement agencies conspire to keep secret for reasons of political correctness. There would have to be hundreds upon hundreds of thousands of crimes that no one is reporting in order for the current violent crime rate to come close to matching what it was a generation ago. There can't be an epidemic of black crime that coincides with the least amount of total crime in America since the 1960s.

The point, of course, isn't to make an argument supported by statistics. It's to marshal all available anecdotal data to support the paranoid white conservatives' gut feeling that this country is on the brink of Charlie Manson's Helter Skelter.

(Sometimes the need to prove the wanton criminality of blacks leads right-wing outlets to have to pretend to care about other frequently marginalized groups. But it's a bit difficult for World Net Daily, whose editors put distracting and hilarious scare quotes around every example of the word "gay" in Flaherty's column on black-on-gay violence.)

"Flash mobs" are reported on extensively, because they're novel and can be used to stoke fears of young people and the Internet. The media, of course, have absolutely no clue what they're reporting on. The press always claims (probably based on police statements) that teens are summoned "on Twitter" or "with social media" for the purposes of spreading chaos; in Philadelphia, at least, more than one "mob" was actually a crowd of people attempting to see a dance crew. Other "mobs" are parties that get out of hand. Which is a thing that's been happening as long as there have been parties. Of course some of the mobs are genuinely mobs of youths looking to wreck and steal shit -- this has been going on since America invented teenagers and gave many of them no legitimate means of access to privileged society and no constructive outlets for their aggressive tendencies. (Regardless of creed or color, teenagers are basically sociopaths and should be avoided at all costs.)

In addition to having decided to make racial fear-mongering his profession, Flaherty's also a sloppy aggregator. He gets wrong the simple details of the stories he's abusing to make his argument, and he also seems to invent facts from thin air. Some examples from his column on a series of random incidents in Minneapolis, which became a chapter of his silly book: A woman who was badly beaten by a group of teenage girls is said to have been attacked by "a gang of 20 black women." The number of attackers appears nowhere in the linked story. (He also seems to intentionally elide the stated motive for the attack, which wasn't anti-white animus but a missing pair of sunglasses.) "In September of 2011, a crowd of 1,000 black people rioted through downtown fighting, stealing, destroying property," he writes. There's no way of knowing how many people were in the crowd, but it doesn't look to me like 1,000. In the book he seems to have changed number to 800, though he still has no possible way of counting. (The person who uploaded video of the crowd's brief marauding wrote of "a few hundred.") Flaherty says "a group of black people attacked a mobile alcoholic beverage cart in Minneapolis," but there's no such thing as "mobile alcoholic beverage carts" in Minneapolis. The thing attacked was a bunch of people on one of those stupid group bicycles with a beer keg. This is all pretty basic stuff, and my folks always taught me that if you're going to use a bunch of random incidents to try to convince people of the existence of a secret nationwide pandemic of racial violence, it's best to get the details right.

This belief in an epidemic of black-on-white crime that the press and law enforcement conspire to keep secret is an old one, and crazies have been sending newspapers mimeographed manifestos on the subject for years. It's a common topic of discussion at white supremacist message boards and in the comments sections of newspapers, which are often indistinguishable from white supremacist newsletters. It was the sort of crap Ron Paul's famous newsletters would cover, back when he was trying to win the "rednecks" over to the libertarian cause. The sort of people who obsess over this shit are of course older, white and likely already terrified of America's urban areas and black neighborhoods. They are also sort of hilarious, in a creepy way: Their primary argument is that they are and you should be constantly petrified, and yet they also think that they are Tough Realists. Here's a telling passage from a review of Flaherty's book:

I live not very far from The Loop in St. Louis, site of several recent “Flash Mob” incidents in which whites were indiscriminately attacked by mobs of “disaffected teens.” Thanks to HB218, I can – and do – legally go armed anywhere in the U.S. (except on airplanes and such). But despite this advantage, knowing what’s been occurring on The Loop, I would not go there, especially at night, unless I had a light infantry company with me. A pistol is fine against a handful of attackers … but dozens? Hundreds? Then there’s the beef you’d have with the authorities for popping some miscreant, especially a black one. Sorry, Loop. You ain’t worth the trouble.

In other words, we have a bunch of pants-shitting cowards who think (and sometimes arm themselves like) they're Dirty Harry.

What's changed since the days when Ron Paul was profiting from fear-mongering is that as soon as Barack Obama was inaugurated, this gutter-right meme started popping up in the conservative mainstream. This is largely thanks to the shamelessness of Matt Drudge, whose Drudge Report semi-regularly becomes a clearinghouse for every single example of violence committed by young black people than he can find. From Drudge, the obsession with scary black people moved to Rush Limbaugh, who connected it directly to Obama. It's now a common trope at the Daily Caller, on "The O'Reilly Factor" and in the syndicated columns of (black) conservative "scholar" Thomas Sowell.

"White Girl Bleed a Lot" is a dumb, self-published book by a guy no one's ever heard of, but he's made himself an expert on one of the right wing's favorite, and currently most useful, myths. With people like Sowell promoting him, Flaherty might soon find himself moving up in the right-wing media world. Unless a flash mob gets to him, obviously.