Ayn Rand vs. the pope 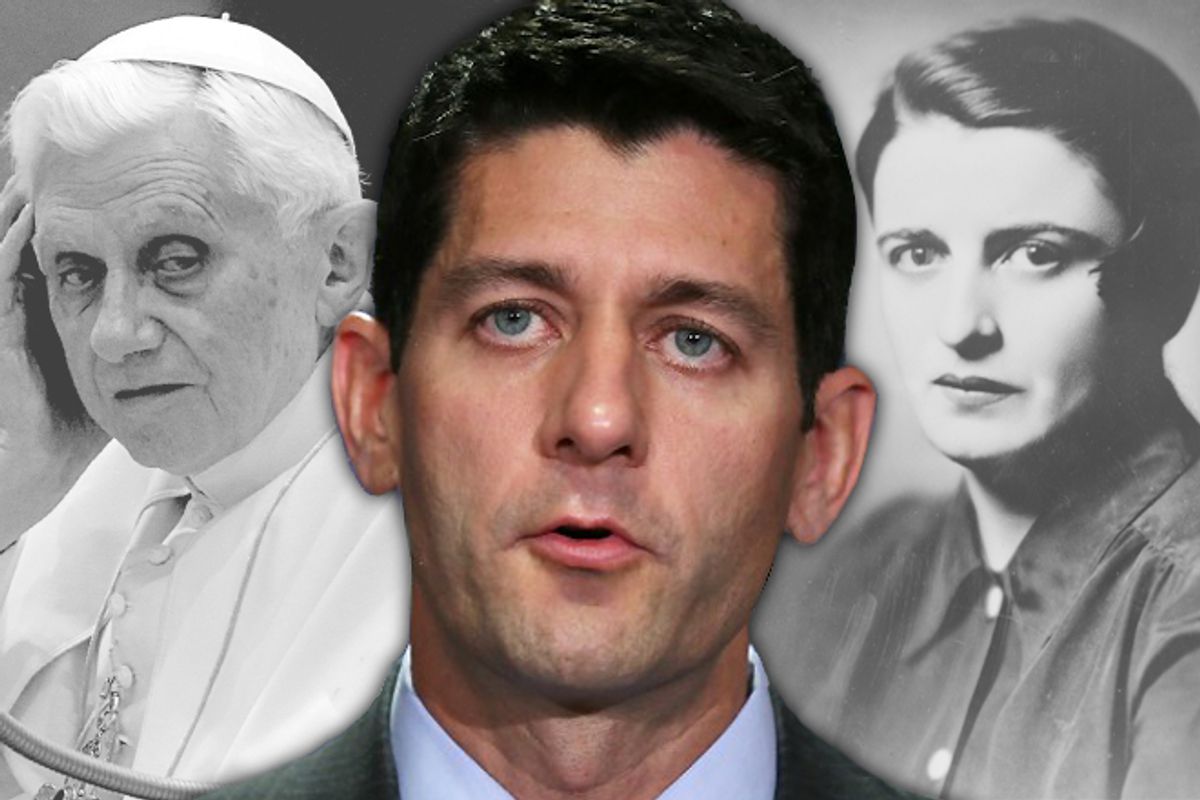 Much has already been made of Rep. Paul Ryan’s libertarian pretensions and his failure to live up to them from across the ideological spectrum (here, here, here). Yet there’s a more disturbing inconsistency that deserves more scrutiny regardless of where you find yourself on the ideological or theological spectrum. The newly christened vice-presidential nominee holds two deeply contradictory and inimical materialist and spiritual worldviews represented by the objectivist philosopher and novelist Ayn Rand and the Catholic Church.

This naturally begs the question of how a devout Catholic can follow the social justice theology of the church yet also idolize an atheist that preached the "virtue of selfishness." Somehow in Paul Ryan’s mind, Jesus Christ and Ayn Rand are complementary figures, not warring factions in defining how an individual should lead a moral life.

This leads to a man with dual and mutually exclusive allegiances. Not only is the Catholic Church historically an authoritarian institution par excellence, it is also one intimately concerned with social justice, arguing that state intervention is necessary to blunt the sharp edges of unbridled capitalism. For instance, in his 1961 encyclical “Christianity and Social Progress,” Pope John XXIII called attention to and excoriated economic inequality in a voice very similar to Occupy Wall Street today.

Nevertheless, in some of these lands the enormous wealth, the unbridled luxury, of the privileged few stands in violent, offensive contrast to the utter poverty of the vast majority. In some parts of the world men are being subjected to inhuman privations so that the output of the national economy can be increased at a rate of acceleration beyond what would be possible if regard were had to social justice and equity. And in other countries a notable percentage of income is absorbed in building up an ill-conceived national prestige, and vast sums are spent on armaments.

Within the encyclical, Pope John XXIII even goes so far as to argue for a living wage, something that would make Ayn Rand’s corpse spin. Such “common good” concepts, such as the living wage, were collectivist nonsense to Rand, a ruse used to make tyranny justifiable. And Rand was nothing if not virulently anti-Catholic because of the church’s tendency to lump all humanity together in the bonds of forced altruism and fellowship. One passage from her novella “Anthem” should be especially uneasy reading for any devout Catholic such as Ryan:

I am done with the monster of "We," the word of serfdom, of plunder, of misery, falsehood and shame.

And now I see the face of god, and I raise this god over the earth, this god whom men have sought since men came into being, this god who will grant them joy and peace and pride. This god, this one word: “I.”

Rand’s militant atheism has since led Ryan to distance himself from his former intellectual idol. Speaking to the National Review last April, Ryan said, “I reject her philosophy. It’s an atheist philosophy. It reduces human interactions down to mere contracts and it is antithetical to my worldview. If somebody is going to try to paste a person’s view on epistemology to me, then give me Thomas Aquinas.”

Yet this is the same man who gives copies of “Atlas Shrugged” as Christmas presents and once told the Atlas Society in 2005:

But if we’re going to actually win [the fight between individualism and collectivism] we need to make sure that we’re solid on premises, that our principles are well-defended, and if we want to go and articulately defend these principles and what they mean to our society, what they mean for the trends that we set internationally, we have to go back to Ayn Rand. Because there is no better place to find the moral case for capitalism and individualism than through Ayn Rand’s writings and works.

It isn’t cynical to ask whether Ryan, seeing his career trajectory in ascendancy, chose to not alienate his socially conservative Christian base by repudiating a marginal philosophy he repeatedly touted in the past. But by doing so, he calls into question his intellectual honesty, particularly since his new intellectual role model, Thomas Aquinas, had a habit of writing collectivist things too: "Man should not consider his material possession his own, but as common to all, so as to share them without hesitation when others are in need."

Interestingly enough, though, there is one rare area where the modern Catholic Church and Ayn Rand agree, and that's the immorality of war. Unfortunately, this is the one area where Ryan breaks rank with both his intellectual models. Not only did Ryan vote in favor of the Iraq War, his budget proposal increases defense spending.

Ultimately, Ryan is right: He’s not a Randian, but nor is he a Catholic; he’s ideologically confused. It’s a cognitive dissonance emblematic of a party that can’t decide whether it will follow its aging social conservative base at odds with abortion and gay marriage or chart a new, more libertarian course for a younger generation of Americans who are socially liberal and fiscally conservative.

Everyone has ideological idiosyncrasies, but some people hold beliefs so diametrically opposed to each other that you have to question their sincerity or their intellectual integrity. To tweak Lincoln's famous line, a mind divided against itself cannot stand. And Paul Ryan is nothing if not divided against himself.