Not all Catholics are for Paul Ryan

The V.P. pick hardly ensures the Catholic vote. On gay marriage, birth control and more, a majority back Obama 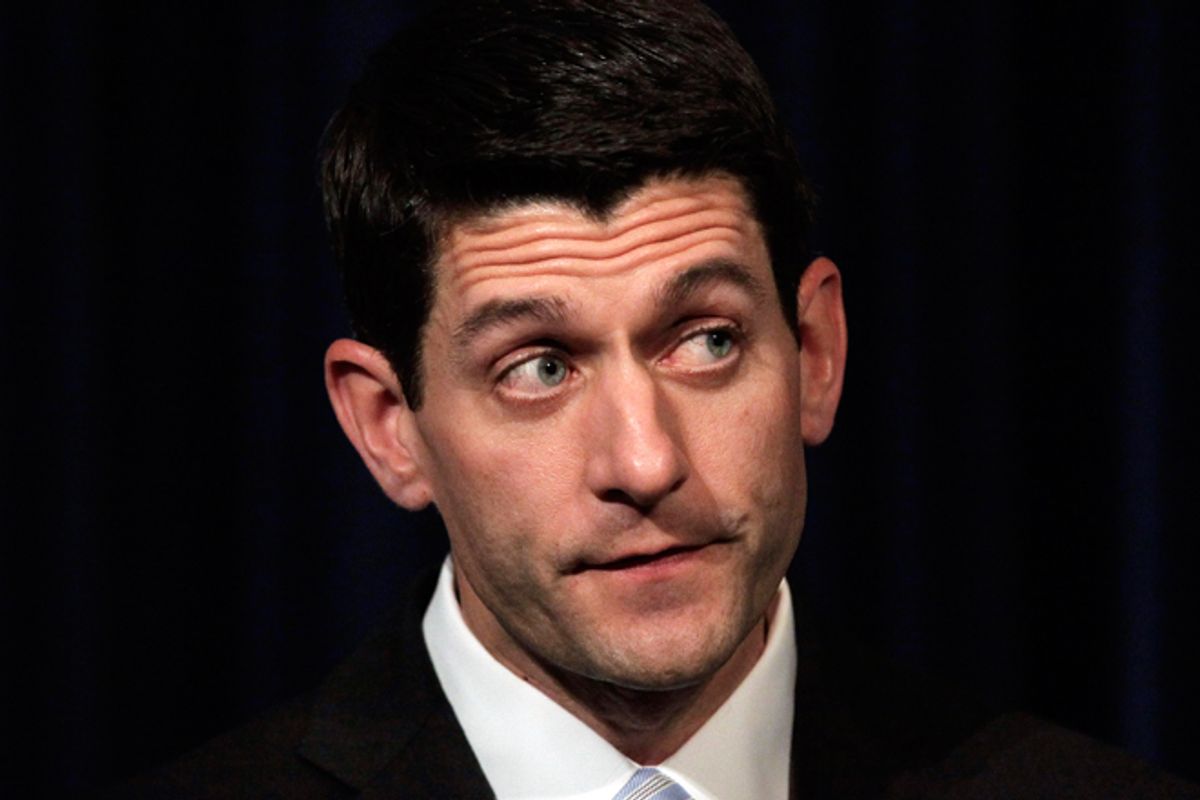 When Mitt Romney anointed Paul Ryan as his running mate Saturday, conservative pundits were quick to point out what a coup that choice was, and how Ryan would be helpful in swaying the elusive, hotly desired Catholic vote. But you know what's got two thumbs and represents the Catholic vote, guys? Me. And the only place where Paul Ryan's a candidate who reflects my Christian ideology is in Not Land.

The fact that the race for the second highest office in the land is currently being waged between two Roman Catholics says much about the modern American version of our faith, and how fractured and contentious and squabbly it is. But you're not supposed to know that. The Catholic Church is supposed to speak with one voice – the pope's – and we Catholics, it's assumed, either toe the line or find ourselves cast out of paradise. To be a questioning, occasionally critical Catholic, one who accepts some of the church's philosophy while rejecting other portions of its dogma, is to be put down as a "Cafeteria Catholic." It's to be labeled a person who picks and chooses only the most palatable portions of the faith and rejects the rest. It's to be considered half-assed.

Yet never has there been a time in American Catholicism when our moral conflict has been more evident. In one corner, you have the likes of Rick Santorum and Paul Ryan. You have the Catholic League, which, true to the spirit of my people, really knows how to work a martyr complex. You have the frothing over Obamacare on the grounds of religious freedom.

And then in the other, you have guys like Joe Biden, a churchgoing Catholic who supports reproductive rights and same-sex marriage. You have the Leadership Conference of Women Religious, the group that represents 80 percent of the 57,000 nuns in America, which was sternly rebuked by the Vatican last spring for allegedly promoting "radical feminist" ideals and not being suitably aggressive on issues of birth control and homosexuality. At the time, Sister Simone Campbell, executive director of the Catholic social justice organization Network, said, "They like us to be in hospitals and to be educators and to be engaged in service to our people, but they don't want us thinking. They don't want us talking. And they don't want us asking questions. We're just doing what Pope Pius XII said to do in the 1950s, which was to get educated and engaged in the world and ask questions."

And with a questioning Catholic populace, you're just not going to have a Paul Ryan slam-dunk. Back in April, the U.S. Conference of Catholic Bishops sent out a scathing series of letters to Congress on the Ryan budget, declaring that "A central moral measure of any budget proposal is how it affects 'the least of these' (Matthew 25). The needs of those who are hungry and homeless, without work or in poverty should come first." They added, "The moral measure of this budget debate is not which party wins or which powerful interests prevail, but rather how those who are jobless, hungry, homeless or poor are treated." At the same time, nearly 60 Catholic leaders sent Ryan a letter urging him to "reconsider his radical budget proposal and refrain from distorting Church teaching to give moral cover to a budget that fails to live up to our nation’s best values and highest ideals."

Since the vice-presidential announcement, dissenting Catholic voices have piped up even more loudly. Network quickly called Ryan representative of "the starkest election decision in years about the moral vision and future of our nation," and said that "This year’s election will present us with a critical choice. Do we want to favor the rich on the backs of people in need? Is that who we want to be?" On Monday, the Obama campaign launched its "Catholics for Obama" team, featuring such notable American Catholics as Maryland Gov. Martin O'Malley; Ted Kennedy's widow Victoria Reggie Kennedy; and Stephen Schneck, director of the Institute for Policy Research & Catholic Studies at Catholic University of America. And, oops, Ryan running mate Mitt Romney's association with Bain caused Nicholas P. Cafardi to recently state in the National Catholic Reporter that the Republicans are the true "anti-life" ticket.

Of course, there are Catholics who support Ryan. The Romney-Ryan ticket gets the endorsement of CatholicVote.org for being "strongly" pro-life. That Ryan certainly is -- he supported the "Sanctity of Life" act and gets a zero ranking from NARAL. CatholicVote also likes him because "Paul Ryan actually uses the word 'subsidiarity' and can explain it!" So if you're looking for your Words With Friends candidate, there's that.

But here's what American Catholics really look like. Eighty-two percent of us believe that birth control is morally acceptable. (Also, did you know the pill was invented by a Catholic who was devastated when the Vatican condemned his creation?) A significantly higher number of us have had abortions than our Protestant sisters. Fifty-nine percent of us support same-sex marriage. So while conservatives insist that the Obama administration has alienated Catholics, the truth is that many of us are far more philosophically in line with its vision than Romney's.

Faith – even the Catholic faith – isn't some one-size-fits-all proposition. Those of us who still call ourselves Catholic wrestle with how best to interpret the teachings that guide our lives. We can argue over birth control and gay rights until the cows come home. But frankly, I think Jesus was pretty clear on his feelings regarding the rich and selfish, the whole "taking care of the least among us" thing, and that big "love one another" message. And I don't ever remember reading anything in the New Testament to the effect of "I GOT MINE."  That's why in November I'm taking my Catholic conscience with me into the voting booth. Paul Ryan, you haven't got a prayer.