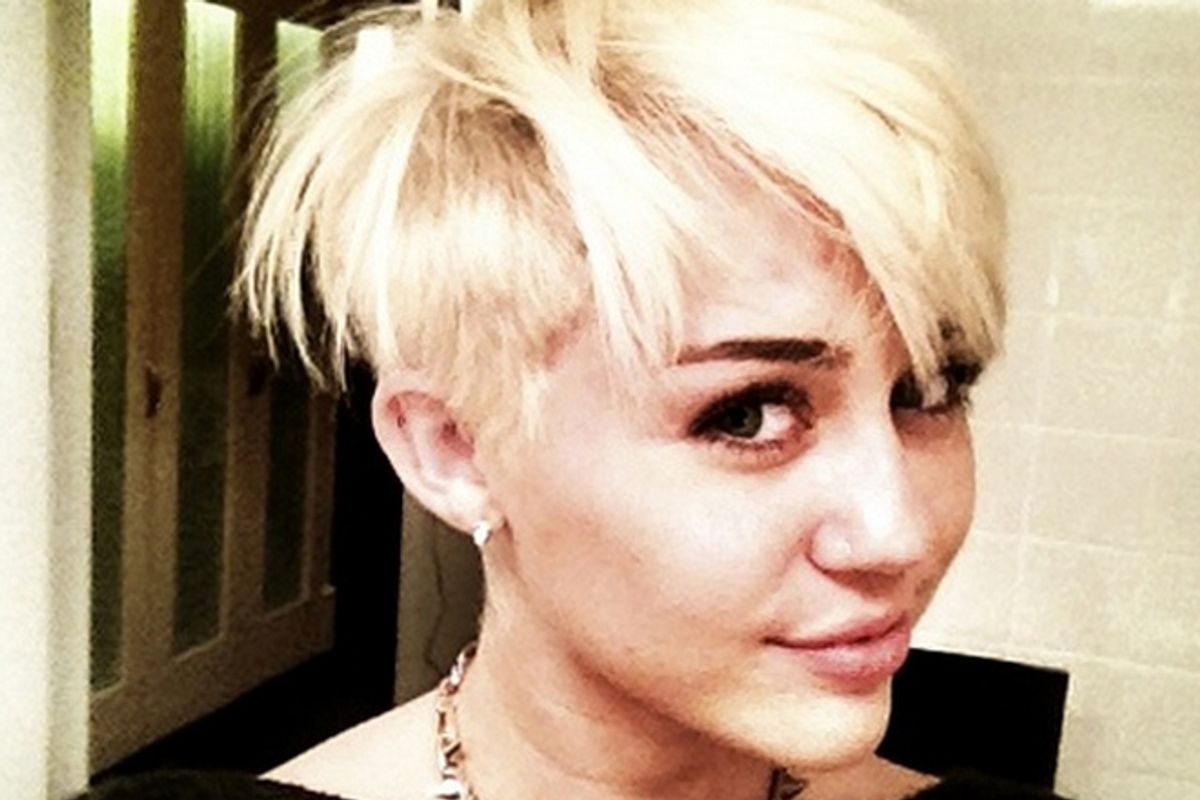 The 19-year-old artist formerly known as squeaky-clean Disney star Hannah Montana has, in recent years, shown a penchant for shaking up good-girl expectations. There was the lap dance. The partying with a bong. The penis cake. The Bob Marley cake. And now, in her latest obviously insane stunt, she's … cut her hair.

After cashing in her trademark long, dark locks for a short, platinum do on Sunday, Miley Cyrus has been expressing nothing but utter delight in her new look. She immediately changed her Twitter avatar to show off her dramatic, pixie-dream-girl look and declared she "never felt more me in my whole life" and that she's "feeling so happy in my skin."

Yet not everyone shares young Ms. Cyrus' enthusiasm. A pretty girl cutting her hair? That's got to be a cry for help, right? Zap2it was quick to ask if Cyrus was "pulling a Britney" -- a reference to Spears' notorious 2007 head-shaving meltdown -- though it ultimately decided she's probably "just fine." On Gather, meanwhile, Rachel Lynn fretted over whether Cyrus' fiancé, actor Liam Helmsworth, could "possibly like this edgy and not-so-girl-next-door statement?" She went on to declare, "Her rather masculine and avant-garde hairstyle is really a love-it or hate-it thing and will undoubtedly take some getting used to among her fans and followers."

Over in the Contra Costa Times, Tony Hicks described what happened to Cyrus in celebrity stylist Chris McMillan's expensive salon by saying that she "went Britney" and "hacked off her hair." He went on to call her "unstable" and "slightly crazy." On the "Today" show, the look was called "hair raising." The International Business Times described it as "shocking," while Slate suggested Cyrus "lost a dare" and noted her resemblance to Draco Malfoy. Even People called it "polarizing."

So just to remind you: A young woman changing her look in a way that doesn't scream, "Please, world, love me because I am a Victoria's Secret model," right now, in the year of our Lord 2012, freaks people out. It actually makes them wonder if she's lost her mind.

Maybe that's because so few of our beautiful, desirable young stars make that leap – and when they do, they're instantly vulnerable to snark attack. After Emma Watson cut her familiar long hair to mark the end of her life as Hermione Granger, she said that, "I had journalists asking me if this meant I was coming out, if I was a lesbian now…. Some people just thought I'd lost my shit." The gorgeous, multiple Academy Award-nominated, short-haired actress Michelle Williams has admitted that "Straight men across the board are not into this hair."

Similarly, when a star cuts her hair for a role, it's assumed – often correctly – that it's a horrible sacrifice she's making for her art. When Anne Hathaway recently cut her locks to play Fantine in "Les Miserables," she told reporters that she went into "a mental-patient level of crying... I was inconsolable." Hear that? Short hair will literally make a woman nuts.

Long hair represents femininity and vulnerability and sex. It's princesses and mermaids and porn stars. Short hair, on the other hand, says, "If you think I'm gorgeous, great, but this isn't about you, pal." Whoooo, scary! In an ABC interview when she was 15, Miley Cyrus showed off a photo of iconic British model Twiggy, all big eyes and choppy blond hair, and said, "One day I'm going to cut my hair like that. I know I am. I will." So she did. But in a culture where a female doing something just for herself – not her fiancé, not her family, not her fans – is seen as transgressive, that's enough to call her masculine and shocking and unstable. And that's not just sad, that's totally crazy.