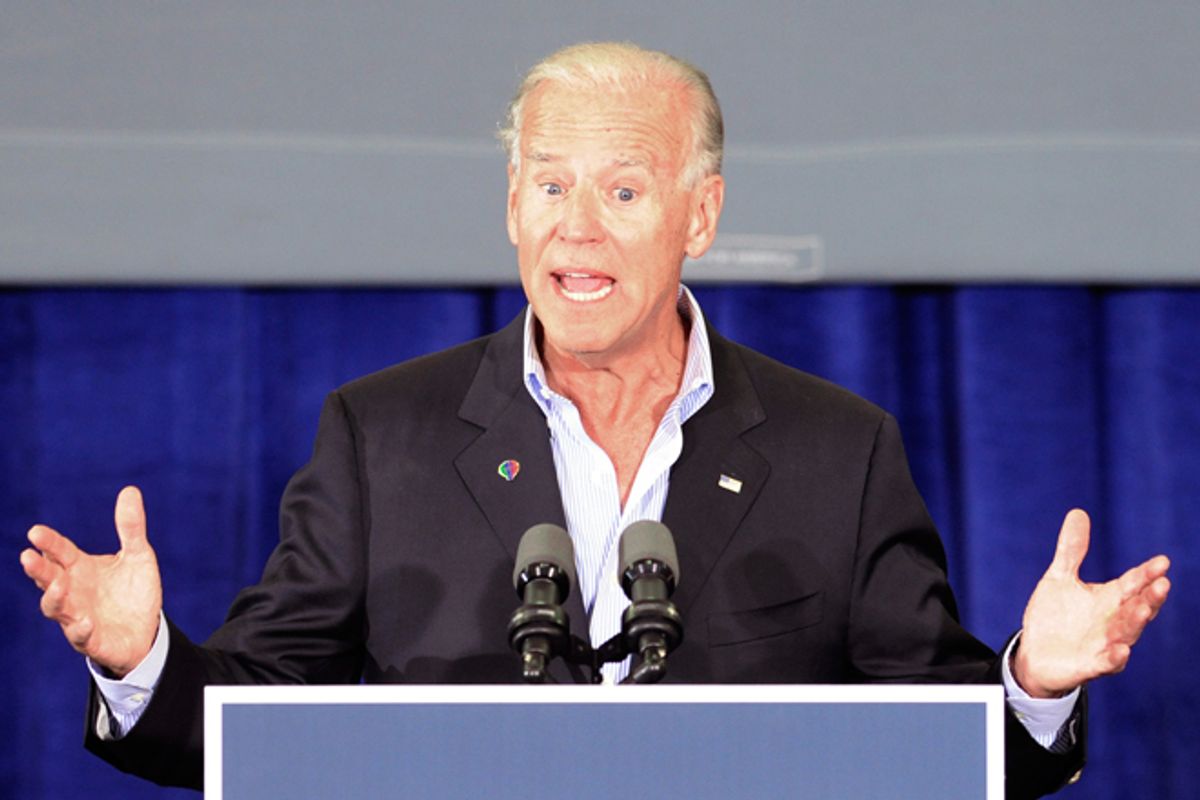 Oh, Joe Biden. There you go again, saying something colorful and quotable and shocking, maybe a little bit more vivid than is routine in political speech. By now everyone knows that the vice president told a Virginia audience Tuesday that once Mitt Romney "unchains" Wall Street from Dodd-Frank reforms, "They’re going to put you all back in chains." Since his audience was mainly but not exclusively African-American, the pearl-clutchers in the GOP and media claimed Biden was accusing Romney of wanting to reinstate slavery, denounced him. "The press pounded Palin when she talked about ‘blood libel,'" Ari Fleischer wrote on Twitter. "What will they do about Biden’s ‘chains’ remark?" The Romney campaign likewise tweeted its outrage.

Romney himself attacked the Obama-Biden campaign in multiple interviews. "The president's campaign is all about division and attack and hatred," he told CBS, adding, "And the comments yesterday by the vice president I think just diminish the White House that much more." Even some nominal liberals joined the Biden-bashing. "Of course the GOP has done nasty racial stuff this campaign (esp newt). But Biden's 'chains' statement was still absurd," Peter Beinart tweeted Wednesday morning. There were widespread demands that the vice president apologize.

But he didn't. Biden clarified his remarks, noting the frequency with which Republicans use "unchain" and "unshackle" metaphors to describe the way they'd "liberate" Wall Street from Obama-era regulation and reform.

Here's what Congressman Ryan said. He said, 'We believe a renewed commitment to limited government will unshackle our economy.' The Speaker of the House said, used the word 'unshackled' as well, referring to their proposals. The last time these guys unshackled the economy, to use their term, they put the middle class in shackles. That's how we got where we are.

Nine million jobs lost. Wage stagnation. 16 trillion dollars in wealth you all lost in your home equity, in your 401Ks and your pension plans. You're the ones that got nailed. All of America, except the very few.

And I'm told that when I made that comment earlier today in Danville, Virginia, the Romney campaign put out a tweet. You know, tweets these days? Put out a tweet, went on the airwaves saying, 'Biden, he's outrageous in saying that,' I think I said instead of 'unshackled,' 'unchained.' 'Outrageous to say that.' That's what we had. I'm using their own words.

I'll admit, I winced a little when I first heard Biden's remarks. Slavery is a specific and shameful historic tragedy, a blot on our country's inspiring founding claim that "all men are created equal." We shouldn't mess around with it as metaphor – whether that involves conservatives saying African-American Democrats live on a "plantation," as Rep. Allen West did last year; or progressive Rev. Jesse Jackson comparing LeBron James's treatment by Cleveland Cavaliers' ownership to slavery.

But "chains" and "shackles" have had literal and metaphorical roles in America's history of class conflict and social injustice, all the way back to the founding. This may be an uncomfortable truth, for all of us, but white people have been "chained" and "shackled" too. Most white immigrants in the 17th and 18th centuries came here as indentured servants; there used to be debtors' prisons where the poor were literally shackled for the crime of poverty. (Tragically, debtors' prisons are making a comeback in the U.S.) Thanks to the steady if always too slow march of progress, groups of Americans have gradually been freed from their shackles, while plutocrats complain that reasonable restrictions on their power to oppress and abuse represent reformers turning the tables and "shackling" them. Biden was well within the bounds of acceptable rhetoric about those historic conflicts.

And honestly, I'm surprised and impressed that the White House seems to have strengthened its spine and is resisting the silly demands of Republicans and their media abettors for apologies and denunciations when none are needed. Ever since the sad ritual of trashing Democratic consultant Hilary Rosen for suggesting that Ann Romney might have trouble relating to the concerns of mothers who labor in the workforce, the party has gotten feistier when faced with the politics of faux outrage. They refused to apologize when Stephanie Cutter suggested Romney could have committed a felony if he continued to sign SEC forms as CEO after he left Bain Capital; or after Harry Reid said he'd heard Romney paid no income taxes.

And when Obama himself said business owners had government help becoming successful and "didn't build that" business alone, he responded to GOP criticism by pointing to the context of his remarks, and complaining that Republicans were the ones being unfair with ads that ignored that context. (The White House responded to Romney's Biden complaints by saying the presumptive GOP nominee sounded "unhinged.")

OK, so a campaign that involves charges and counter-charges about who's really being unfair could get tedious soon, I admit. The only thing more tedious is watching Democrats refuse to stand up for themselves. Good for Biden for sticking to his guns about the way a Romney-Ryan administration would shackle so many of us again.