A little room to write 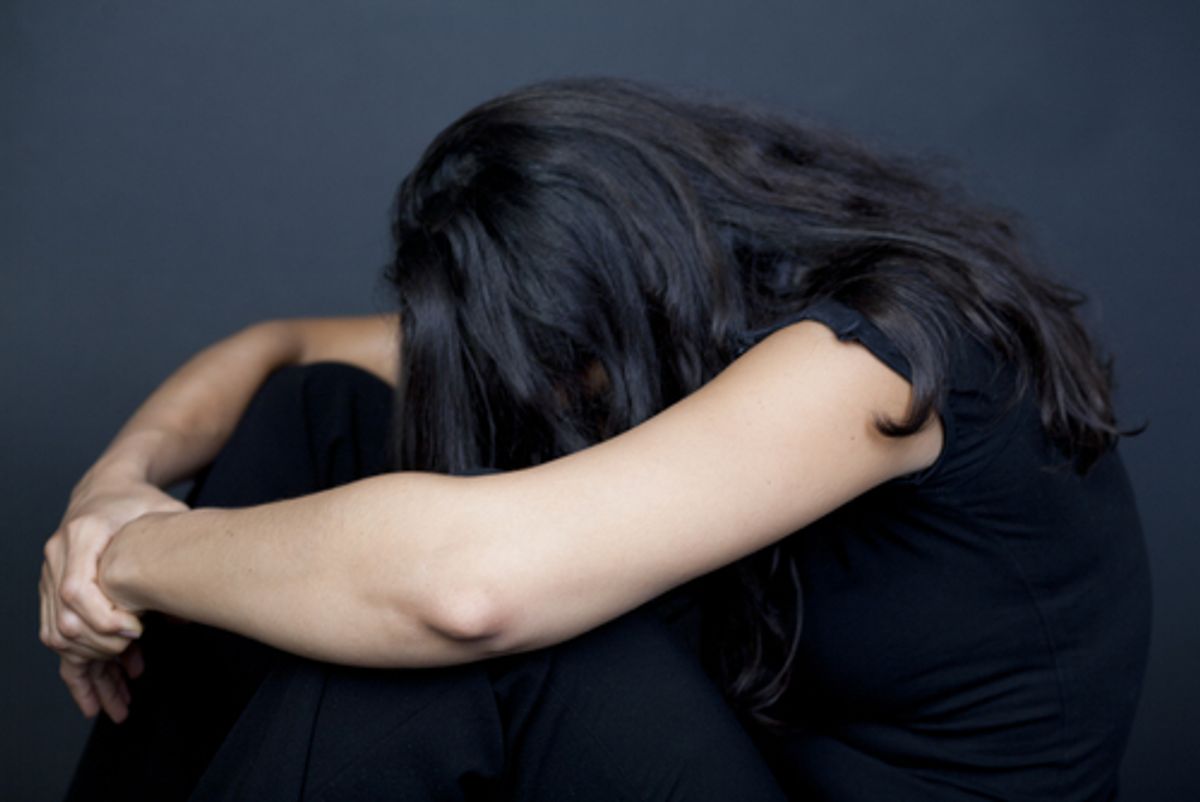 When I walk into the room, I don't know any details aside from these: They are all women, they have all been incarcerated and they have all chosen to be here, at this writing workshop, one evening a week, in this balmy conference room with plush faux-leather chairs.

I am a 26-year-old white woman. Their ages are staggered – maybe one woman is in her 30s, but the rest are in their 40s and 50s. They are various ethnicities, all people of color. One writer has a Puerto-Rican accent; another’s voice reveals a Brooklyn upbringing. Another has a slow drawl from I don't know where. She is so self-possessed, her speech so measured, her voice is like a soft metronome, setting the pace for the whole workshop.

You’re leading a writing workshop, not group therapy, said the woman who hired me a couple of months earlier. She warned me about how easy it could be for these sessions to slip into just that. All the workshop participants have suffered in various ways—some with mental illness, others from intimate partner violence, and many solely at the hands of the system. They are poverty-stricken and have been abused for precisely that. "The criminalization of poverty" is the phrase that keeps coming to mind.

I have been afforded societal privileges that my writing partners have been denied because of race and socioeconomic status and all the other facets of life that we are born into but have no say over. And as half writer/half social work student, it is undoubtedly a challenge to just focus on the Prose, the Imagery, the Tone — especially when one woman shares the story of watching an infant become an orphan, in a heroin-induced haze, as her John turns stiff and gray.

On one particular evening in June, the prompt is to write about a feeling: don't identify what it is, just describe it. One of the guidelines of the workshop is that we treat all writing as fiction. We refer to the “narrator” and “character,” not to the writer directly. It’s possible that their work is all fiction, though my own writing done in these workshops is usually thinly veiled memoir. I have had only a handful of sessions with these women, but already I feel empowered by their bravery.

I sit with the prompt for a minute, and then start writing. I write about my high school boyfriend, Brian, whom I hadn’t seen since we broke up nearly a decade ago. I write about how I felt nothing when I ran into him outside a coffee shop one day in Williamsburg, about recognizing his posture when I saw him from the back; how his hands sunk into his pockets, how he flicked his cigarette, how the soft mop of blond hair hadn’t grown any darker since I met him at 15. I write how I could never have imagined seeing him and feeling nothing, and how despite this absence of nausea or flutter of anxiety, I still often feel his presence acutely in my life. I write about dating my current boyfriend, with whom I have been friends for years and who has never once been anything but gentle and kind, warm and forthcoming. I write that, despite 10 years having passed and this new man in my life who touches me so delicately, I feel a panic set in when we have sex. I feel the echo of past violence that just hasn't gone away. I write about the disgust and grief that my body remembers, regardless of what is happening right there in the very present moment, which is no yelling or screaming, no fists through walls, no crying, just a soft yellow glow from my boyfriend's lamp, some quiet, melodic Bon Iver drifting from the speakers on his desk, and our bodies entwined.

I read my piece aloud last, after a handful of other women share their stories. It feels at once remarkable and somehow unsurprising that many of us describe nearly identical feelings of being violated; the sorrow and emptiness that comes with being robbed of control, of having little to no say of what happens to your body – whether because of physical violence or emotional threats or that plain, guttural fear of what will happen if you try to fight it. Some of the women articulate feelings that I haven’t even realized I've had, use metaphors that resonate so totally, my eyes are glassy. I think most of us are in awe of our shared connection. Group therapy or not, writing the words and hearing the stories is, absolutely, a kind of healing.

I met Brian at a writing workshop too – a summer program after my sophomore year of high school. I was 15 and still had braces and bright blond highlights in my otherwise dark, unruly hair. We made out on the lawns of the Columbia University campus, held hands on the subway, went to concerts in the West Village. It was my first relationship and I was very quickly swept up in the romance of having a boyfriend: falling asleep on the phone together every night (a cordless phone always tucked beneath my pillow in case he called back), being naked with someone, feeling wanted and sometimes even loved.

The first time I ever saw Brian unleash his rage was just a few days after I lost my virginity to him. One night in May, we were trying to get into a concert on the Bowery. The bouncer wouldn’t let us in. We weren’t underage, but Brian had accidentally left his wallet at my parent’s apartment. I turned away from the club as Brian sprinted down the block, screaming and crying as he ran. He kicked over a row of newspaper stands and punched his fists into a metal grate until they were bloodied and the skin was peeling off. After that it seemed anything could set him off – a fight with his mom, a lost Discman, another call interrupting me while we were on the phone. And, just as quickly, his anger became inextricably linked to sex.

The weekend of Brian’s 17thbirthday, I’d saved up some money and got us a room at what turned out to be a hostel in Chelsea. It was an icy night in February and the room was cold and bleak with filthy industrial carpeting and a small metal-framed bed covered by a thin beige comforter. We started to have sex, but for whatever reason I wasn’t really wet. We were fumbling around, and the condom was starting to dry up, and it just wasn’t working. I felt my heart speed up as Brian pulled out and threw the condom against the wall. He was furious and screaming. What did it say about our relationship, about my feelings for him, if I couldn’t even stay wet long enough to have sex with him? I was a fucking worthless bitch. He got out of bed and threw a lamp across the room, punched some walls, and then left the room.

I lay on my back and tried to do what my dad taught me when I was little and couldn’t fall asleep. He told me to count backward from 100, and I’d surely fall asleep. I could never do it. I’d always count to about 80 and then get bored or restless. I’d drag my blankie out into the living room where I could find my parents reading or watching the 11 o’clock news.

This time, this night with Brian, I was concentrating so hard I think I almost made it to 30. But he got into bed and started sobbing, these slow guttural moans, his chest heaving up and down. I put my hand on his back, damp with sweat, soaking through a flimsy T-shirt he was wearing. I don’t remember if my anger was softening or maybe it was just a cool relief that his fury had passed. Then Brian turned to me and asked if we could please, please, please, have sex?

Sex had become so infused with violence, with toxicity. And still in my mind it is difficult to extricate all these things. Writing about that night, I recall how trapped I felt, how terrified and totally out of control, how my body had become something like my enemy. But couldn’t I have just left? Gotten my clothes and my backpack and simply walked out the door? I don’t know the answer, at least not for my 16-year-old self.

I write about Brian surrounded by women who were imprisoned, literally, incarcerated for months and years at a time. I think about the differences between their physical incarceration and my own imprisonment in my body, my mind, my memory, because of violence and rape and fear. I marvel at how these women have managed all these losses and come out the other side, how they made it out of prison, to this room, to write.

On this night, when I share my story with the writers in my workshop, I feel something remarkable happening. It isn’t as though I’d kept these experiences secret: I’d told my friends about the hostel incident right after it had happened and talked about those nights in therapy over and over again. I examined the stories from a thousand different angles, addressing my anxiety, my weaknesses, my anger. But there was something striking about what was happening in the conference room. Though the details of our stories were so different — I was 15 and living on the Upper East Side with my parents; some of the women were homeless or in prison — we were plagued by the same feelings. We used the same language to describe our sensations of being trapped and violated; we were all carrying around the tiny, hardened weight of that loss. Our writing was turning these ugly experiences into something almost beautiful, something like art, something empowering, liberating and completely our own.