Gabby Douglas will be criticized for everything

The gymnast took heat for her hair during the Olympics. Now she's changed her style, and guess what? More critics! 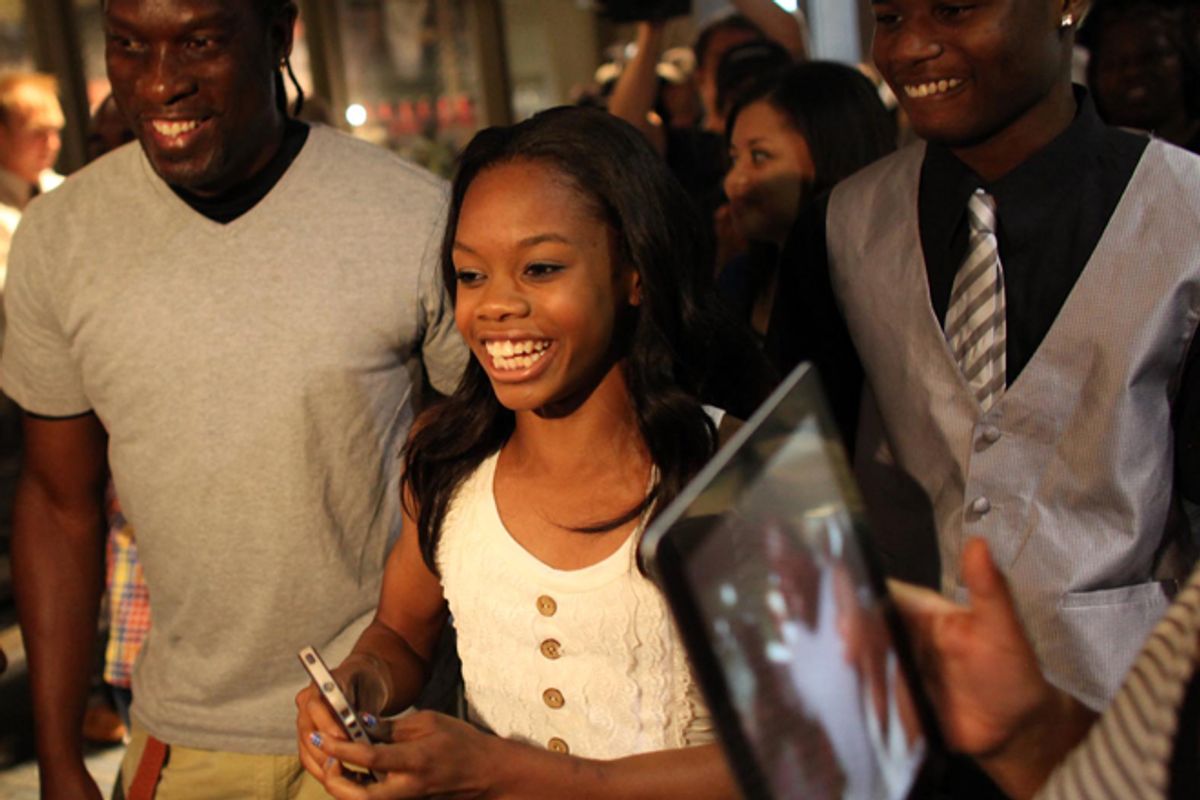 Ladies! They're all just empty shells whose only value is how they look on the outside. You know, like a Lauren Conrad craft project. You can be the secretary of state, and people will have opinions about how much makeup you wear and how much you perspire. You can be a triple-platinum singer, and your image changes will be seen as a gauge of your mental instability. And you can be an Olympic gold medalist, and your hair will be mocked and derided – until you change it, and then you'll be scrutinized for that, too. Gabby Douglas, come on down!

Earlier this month, Douglas gained international fame as one of the stars of the U.S. gymnastics team, the Fab Five. Oh, and she also became famous for the insane Internet savaging that her hair inspired, with calls for an "intervention" on her functional, pulled-back style. At the time, Douglas' mother told Fashionista that:

It's really been African-American women that have come out and attacked her. They don’t know about gymnastics. She has to keep her hair in a ponytail 28-30 hours a week. In gymnastics you’re tumbling around on your hair. You’re falling backwards on it. You’re doing "timers" and your hair is constantly snagging on the mat, and for our hair that’s very detrimental. You’re going into foam pits – and any hair stylist will tell you that foam on African-American hair is destructive. It breaks the hair horribly. We had to come up with creative ways to keep [Gabby's] hair looking good. We’ve tried the short hairstyle, we’ve tried long. We grew her hair out because she preferred long hair. I’m not going to make her cut her hair just to please someone else.

Meanwhile, Douglas herself sounded boggled. "Really?! I won two gold medals and made history and my hair is trending?" Which summed up how a lot of other people felt about it, too.

Now that she's home, however, away from the grueling rigors of competition and thrust into the intense celebrity spotlight, Douglas has been polishing her look. Or, as the Daily Mail calls it, "succumbing to pressure." Earlier this week she sent out pics of her sleek new long-haired look, courtesy of hair stylist Ted Gibson, who's coiffed the likes of Angelina Jolie and Anne Hathaway. The International Business Times swiftly reported the move as Douglas "Hires Celebrity Stylist After Twitter Criticizes Her Do." And ABC News declared that "After being criticized during the Olympics for her pulled-back ponytail, she arrived at 'Good Morning America' on Aug. 15, 2012, with a sophisticated center part and curls cascading to her shoulders."

I'm sorry ... what? Did anyone really think Douglas would show up for '"Good Morning America" or Leno with her hair ponytailed like she was getting ready to do a floor routine? That'd be like assuming she walks around in a leotard all the time. Unless you're the sort of person who never gets out of the sweatpants, most humans adapt their look to the venue. Why wouldn't Douglas do the same?

Douglas is also now a full-blown celebrity. Which means she's going to look like one. She's already an "ambassador" for Procter & Gamble beauty, and she's made numerous television appearances. It's expected that she'd polish her look. Ted Gibson told the Daily Beast this week, "Women of color spend millions and millions of dollars on their hair to look good, so we know how seriously we take the issue of hair," adding, "Gabby is 16 and I don’t want to do anything to make her look 25 years old. I hope we can create something that’s easy and looks great no matter what she’s doing or where she is. I hope to create something that makes her feel good about herself, as well." That's not a reaction to criticism; it's a product of fame.

Douglas is a 16-year-old girl experimenting with her look. What's unique about her situation is that she's going through her changes in front of the entire world. And as Gibson explains, somewhat ominously, "I'm excited because she's so young and I have a chance for input in the brand of Gabby." She's no longer just Gabby Douglas, crazy-talented teenage girl. She's Gabby Douglas, a brand, an image, a style. Hair. And as long as the world is going to judge her based on her exterior, she's smart enough to make sure she's the one controlling the message.