Pick of the week: A robot turns to crime

Pick of the week: Frank Langella trains an unlikely apprentice in the science-fiction satire "Robot & Frank" 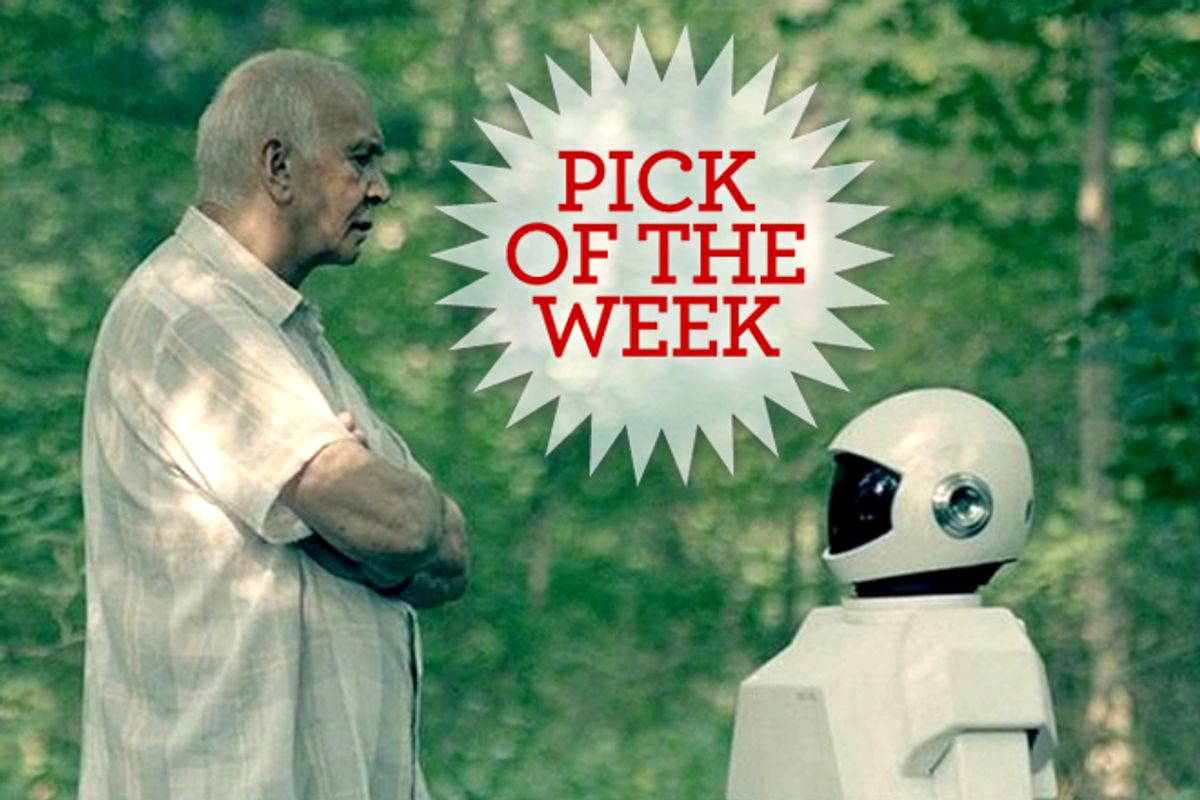 Frank Langella in "Robot and Frank"
--

“Robot & Frank” is such a sly, dry, modest-seeming picture – part science fiction, part social satire, part geriatric comedy – that you don’t realize how well it works until it’s over. Everything about this movie, from Jake Schreier’s direction to Christopher D. Ford’s screenplay to the magnificently collected, unself-pitying performance of the great Frank Langella as an aging cat burglar, is deliberately understated, as if to convince you that the movie lacks ambition or allegorical heft. Even the title sounds like an in-progress file name Ford might have used in Final Draft – well, it’s got a robot, and we’ve cast Frank! And the finished product makes perfect mid-August moviegoing fare: You can watch it as a lightweight, family-friendly comedy about an old guy dragging his electronic healthcare aide into a life of crime, only to discover a day or two later that the mood and ideas and emotions have stuck with you.

We’re in the picturesque Hudson Valley town of Cold Spring, N.Y. – in real life, and as it is depicted here, a Potemkin village of amped-up cuteness – in the “near future.” But it’s far enough away that a workaholic yuppie like Hunter (James Marsden) can buy his ailing father, Frank (Langella), a perky robot helper who cooks and cleans and tries to restore order to the daily routine. This cheerful appliance, as Frank resentfully calls him, resembles an upright vacuum cleaner with an astronaut’s helmet attached to the top, and speaks in neutral, cheerful tones supplied masterfully by Peter Sarsgaard. It’s genuinely one of the best robot performances in cinema history, and you really wonder how many takes it required Sarsgaard to nail some of these lines without busting a gut. (“Frank, planning this burglary was a great idea!”)

See, it’s the future, so even though Frank suffers from far worse episodes of memory loss and incipient dementia than he admits, he isn’t mystified or horrified by the existence of robots. He merely resents this one’s happy-fascist insistence on taking him for hikes and serving low-sodium, vegetarian dinners in place of Cap’n Crunch. (“That cereal is for children, Frank! It’s full of unhealthy ingredients!”) But Frank gets to like the machine’s cooking – resisting the meddling of Liv Tyler, as his globetrotting daughter – and then discovers that whoever programmed the robot forgot to include any prohibition on violating the law. In his prime, it turns out, Frank was a “second-story man,” an ace jewel thief who specialized in patiently figuring out how to rob high-security premises where big payoffs could be found.

Since the robot’s prime directive is to restore Frank’s mental and physical health as much as possible – and to encourage vigorous outdoor activity! – he is easily diverted from a focus on gardening to a focus on burglary. Is this, you know, even remotely plausible, when it comes to the presumptive future history of the robot race? I guess not, but that’s hardly the point. Schreier and Ford leave the question of whether there’s a ghost in the machine – that is, whether Frank’s robot has some kind of will or consciousness – hovering lightly in the background. For his part, the Sarsgaard ‘bot cheerfully reminds Frank several times that he’s just a clever simulation with no thoughts or emotions of his own, even when Frank seems to catch him lying, or at least making misleading and strategic comments.

“There’s more going on in that noggin of yours,” Frank muses, but he might well say the same about himself. This movie is not about the mysteries within mechanical brains but the mysteries within our own. Frank and his mechanical friend first break into the town library to steal a rare and valuable copy of “Don Quixote,” one of the few books that isn’t in the process of being scanned and pulped. He wants to give the lovely Cervantes volume to a woman he admires, but that woman is the town librarian, Jennifer (a lovely, measured, quiet performance from Susan Sarandon), who showed it to him in the first place.

Frank never seems aware that his brain has short-circuited when it comes to “Quixote” and Jennifer, or at least not until he faces a much bigger and more startling revelation later on. And the robot, out of dignity or duty or some other unseen objective in his programming, never tells him. As for the delicate and lovely parallel between that great picaresque novel and this movie, with Frank as the deluded but noble knight and the robot as Sancho Panza, none of that occurred to me until I wrote this paragraph.

Everyone in the audience will root for Frank and his robot in their grand scheme to burglarize the tasteful Cold Spring mansion belonging to Jake (Jeremy Strong), the patronizing zillionaire who is funding the privatization and digital-age renovation of Jennifer’s library. “You’re our connection to the age of printed information!” Jake says jovially, clapping Frank on the shoulder and stiffening the latter’s spine. It is, however, a flawed criminal scheme, concocted by an old man in uncertain mental condition and a walking computer with no experience of the world. Frank and his robot both succeed and fail, and both are required to make unexpected sacrifices in a conclusion with a tender, rueful and surprising emotional potency.

Certain things within the final act of “Robot & Frank,” including Jeremy Sisto’s role as a county sheriff homing in on Frank, are too formulaic for this artful and subtle film. Schreier does not deliver a heavily art-directed or effects-rich vision; this is a character comedy, even if one of the characters, as he repeatedly assures us, is not human. But this movie paints a distinctively witty and faintly troubling picture of an Earthbound future, which feels like the same ambiguous era when Keir Dullea’s astronaut attains godhood in “2001: A Space Odyssey.” I suppose this is a story about the paradoxes of technology in some ways, with faint echoes of Isaac Asimov’s agenda-setting “I, Robot.” But “Robot & Frank” bounces off some philosophical questions, new and old, on the way to considering the much greater paradoxes of human life, lived in solitude and togetherness, love and sacrifice, all that is remembered and all that is forgotten.