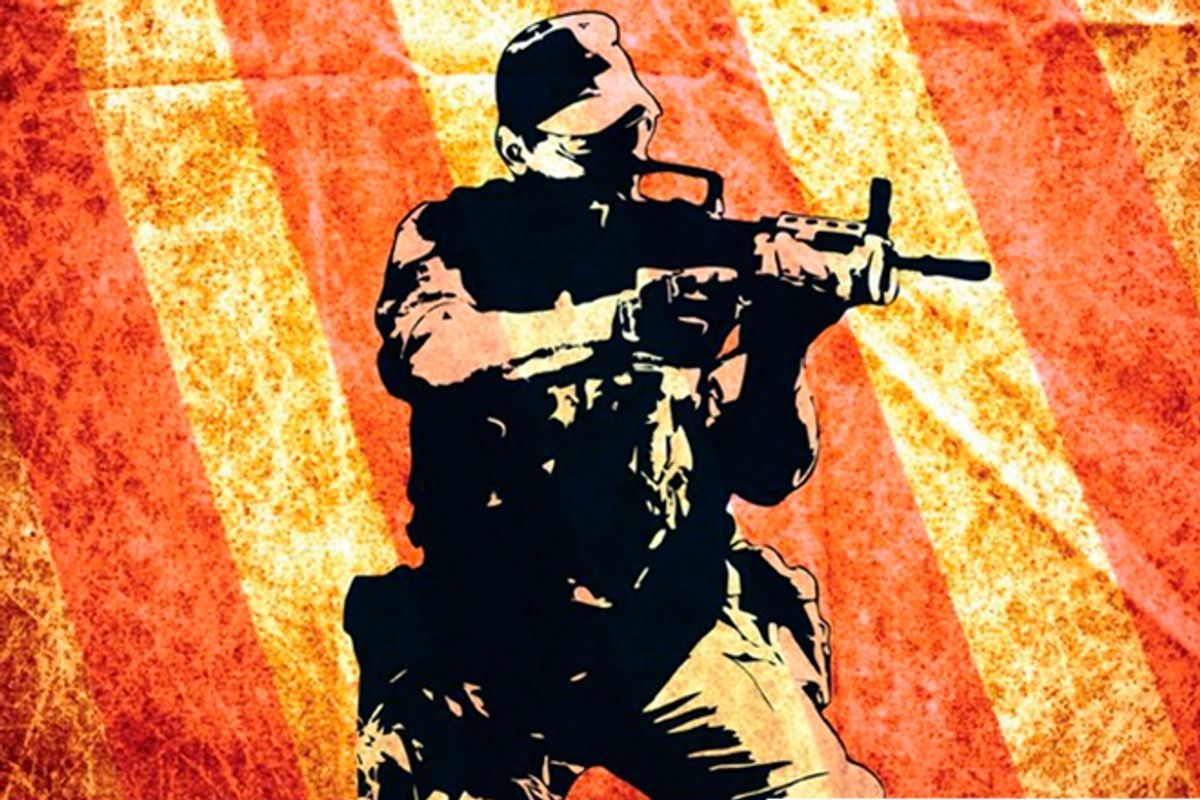 This article is excerpted from "Right-Wing Resurgence: How a Domestic Terrorist Threat Is Being Ignored,"by Daryl Johnson, to be published on Sept. 16 by Rowman & Littlefield Publishers Inc.

Experts who monitor domestic terrorism know that extremist movements, groups, and individuals are influenced by controversial, often polarizing, national issues. Historically, right-wing extremists have taken strong stances on the issues of gun control, the right to life (abortion debate), same-sex marriage, and multiculturalism, among a host of other national issues. The debate surrounding the topic of illegal immigration appears to have trumped all other national issues for right-wing extremists today. For the white supremacist movement, this is not a new or emerging issue.

Historians have noted a strong correlation between large migrations of foreigners to the United States and increased acts of violence against immigrants. For example, riots and violence erupted in Philadelphia in the mid-1800s following a large influx of Irish Catholic immigrants. The KKK peaked in the 1920s with approximately five million members, at the time lessening its focus on African-Americans and shifting its attention to Catholic and Jewish immigrants. In Texas, during the 1980s, a Klan group systematically harassed and attacked Vietnamese fishermen in an effort to put them out of business and drive them from the town.

In 2008, my team published an intelligence assessment highlighting the trend of white supremacist groups accelerating the level of their proselytizing and protest activity to focus on the anti-immigration debate. We noted that KKK factions and neo-Nazi groups have engaged in a noticeable increase in activity such as cross burnings, racist Internet postings, leafleting campaigns, rallies, unity and social gatherings, and violent video games as they exploit community fears and frustration over what they describe as an “immigration explosion.” The research for this project provided more data that supported a rise in right-wing extremist activity.

Historically, white supremacist rallies attracted around fifteen to twenty participants. During 2006 and 2007, however, several rallies that focused on anti- immigration had at least fifty participants, and one even attracted approximately 200 demonstrators, according to media reporting.

In addition, we observed an expansion of the locations where white supremacists have sponsored anti-immigration protests. Our review of open-source information revealed that during the previous five years, the majority of anti-immigration demonstrations by white supremacists occurred in states on the U.S.–Mexican border, such as California and Texas. During the same period, right-wing extremists hosted anti-immigration protests in at least twenty-eight states, indicating that the immigration debate had spread beyond the border states to other areas of the country.

White supremacists and other right-wing extremist organizations were playing upon societal frustration related to the immigration debate to recruit new members. Of particular concern, several new Klan groups had emerged and were expanding into other areas of the country.

An Imperial Wizard of the North Carolina–based Cleveland Knights of the Ku Klux Klan stated that his group was gaining members because people who would not normally consider joining were signing up out of frustration over illegal immigration, according to an online media interview. The Empire Knights of the Ku Klux Klan, established in Florida in 2005, had expanded to eighteen states by January 2007. KKK-affiliated groups were also spreading to areas of the country that historically had not experienced much Klan activity. For example, the Brotherhood of Klans group claimed to have established chapters in areas of Iowa that have had a large influx of Mexican immigrants.

White supremacist groups appeared to be recruiting the more extremist members of community and mainstream groups who are energized to take stands against illegal immigration. According to media reports at the time, law enforcement officials expressed concern that some anti-immigration extremists might be susceptible to recruitment by more hard-core racist groups such as the KKK and inclined toward violence. Media reports indicated several incidents of white supremacists attending events in 2007 organized by mainstream anti-immigration groups.

On August 25, 2007, members of an identified neo-Nazi group planned to attend an event put on by a mainstream, anti–illegal immigration group in Crystal Lake, Illinois.

And on July 21, 2007, members of a different identified neo-Nazi group attended a rally in Maryland hosted by a mainstream anti–illegal immigration group.

An internal survey of extremist right-wing websites during 2007 and 2008 indicated that white supremacists are using the Internet heavily in their campaign against immigration. The Internet provides a multifaceted venue for radicalization and recruitment that has long been exploited by many types of extremists. White supremacists began using the Internet to recruit in the mid-1990s, according to the ADL, and thousands of racist blogs, forums, and websites now exist. Many are incorporating anti-immigration rhetoric created by the owners of websites and comments posted by website users.

We had also noticed that immigration was a prevalent topic on Stormfront. As of January 2008, hundreds of member-generated posts contained the word “Mexican” in disparaging messages. User-generated posts with derogatory terms for Hispanics occurred even more frequently.  A review of the National Alliance website, belonging to one of the largest neo-Nazi groups in the country, noted numerous articles in its immigration section, including “20 Questions for Congress about Immigration,” “The End of the World as We Know It,” and “Whose Country Is It, Anyway?”

KKK groups were also turning their websites’ attention to the hot topic of illegal immigration. The largest Klan group in the United States had several articles and political cartoons related to immigration on its website.

Right-wing extremists were using the Internet to promote racist music and video games critical of immigrants; they posted video clips from anti-immigration rallies as well as cartoons, pictures, and songs with anti-immigration messages. Music, video games, and websites are especially successful propaganda tools for recruiting youths into the white supremacist movement.

A white supremacist band based in North Carolina attracted a following, in part, through anti-immigration songs such as “Our Land, Not Your Land.” This song is the background music to at least one anti-immigration video available on YouTube. Furthermore, the band’s CD, unlike the majority of white power music, is available through a mainstream music download company, thus providing the band with credibility and exposure.

A white supremacist addressed the immigration issue by creating the interactive game “Border Patrol.” The object of this free video game is to shoot racist caricatures of Mexicans as they attempt to cross the U.S. border.

Since at least 2003, white supremacists and other extremist anti-immigration groups were reportedly targeting minority individuals, especially Hispanics, for violent attacks. They were not concerned about whether their victims were in the United States legally. A review of crime statistics for the United States indicated that the number of hate crimes against Hispanics has risen especially rapidly in areas experiencing a significant influx of immigrants from Mexico and Central and South American countries. According to FBI data, hate crimes nationwide against Hispanics rose by 35 percent from 2003 to 2006, the last year for which comparable data has been compiled.123 A report from the Los Angeles Human Relations Commission indicates that hate crimes against Hispanics in Los Angeles County doubled from 2003 to 2007. And, in November 2011, the FBI released its annual report on hate crimes in the United States for 2010.

“Hate crimes motivated by the offender’s bias toward a particular ethnicity/na- tional origin were directed at 1,222 victims,” the FBI report read. It is important to note, however, that this particular category of victims is separate and distinct from those based on race, religion, or sexual orientation. ”

Of these victims, 66.6 percent were targeted because of an anti-Hispanic bias,” it read. The remaining 33.4 percent of incidents reported under this category covered all other types of ethnic and national groups combined.

This growing trend of anti-Hispanic hate crime is exemplified in the 2010 murder of Juan Varela, a second-generation Latino-American, who was gunned down by his neighbor Gary Thomas Kelly. Kelly reportedly shouted to Varela, “Hurry up and go back to Mexico, or you’re going to die,” moments before he killed him.

Right-wing extremists had already planned and committed numerous violent attacks against Hispanics in several states. Open-source reporting indicated that members of Aryan Nations and the Imperial Klans of America were arrested for allegedly assaulting Hispanics during 2007.128,129,130 In addition, two unaffiliated racist skinheads attacked and tortured a Hispanic teenager in Texas in 2006. Around this time, a few right-wing extremist radio shows had also endorsed violence against political figures who support amnesty for illegal immigrants.

Furthermore, law enforcement authorities had previously disrupted plots that could have resulted in multiple deaths and incited acts of retaliation or a broader immigration backlash.

In November 2005, a former White Knights of the Ku Klux Klan member was sentenced to fourteen years in prison after he constructed five pipe bombs for an attack against a bus carrying Mexican farm workers.

Also, a member of the Central Wyoming Militia was arrested in February 2007 after communicating his plans to travel to the Mexican border to kill immigrants crossing into the United States.

In April 2007, federal law enforcement authorities arrested six members of the Alabama Free Militia for various firearms and explosives violations. The federal investigation reportedly stemmed from a plot in which militia members allegedly discussed and conducted reconnaissance for a machine gun attack on Hispanics.

Over the past several years, right-wing extremists have continued to use the immigration debate as a rallying point and recruitment focus because it remains an issue to the U.S. public. Mounting frustration over a perceived lack of government action concerning illegal immigration has the potential to facilitate individuals or small groups toward violence in the future. If violent acts occur, they will likely be isolated, small-scale attacks directed at specific immigration-related targets, such as a Hispanic community center or foreign consulate of Latin American countries.

Excerpted from "Right-Wing Resurgence: How a Domestic Terrorist Threat Is Being Ignored," by Daryl Johnson," to be published in September by Rowman & Littlefield Publishers Inc. Copyright © 2012 by Daryl Johnson. All rights reserved.