We made a sport 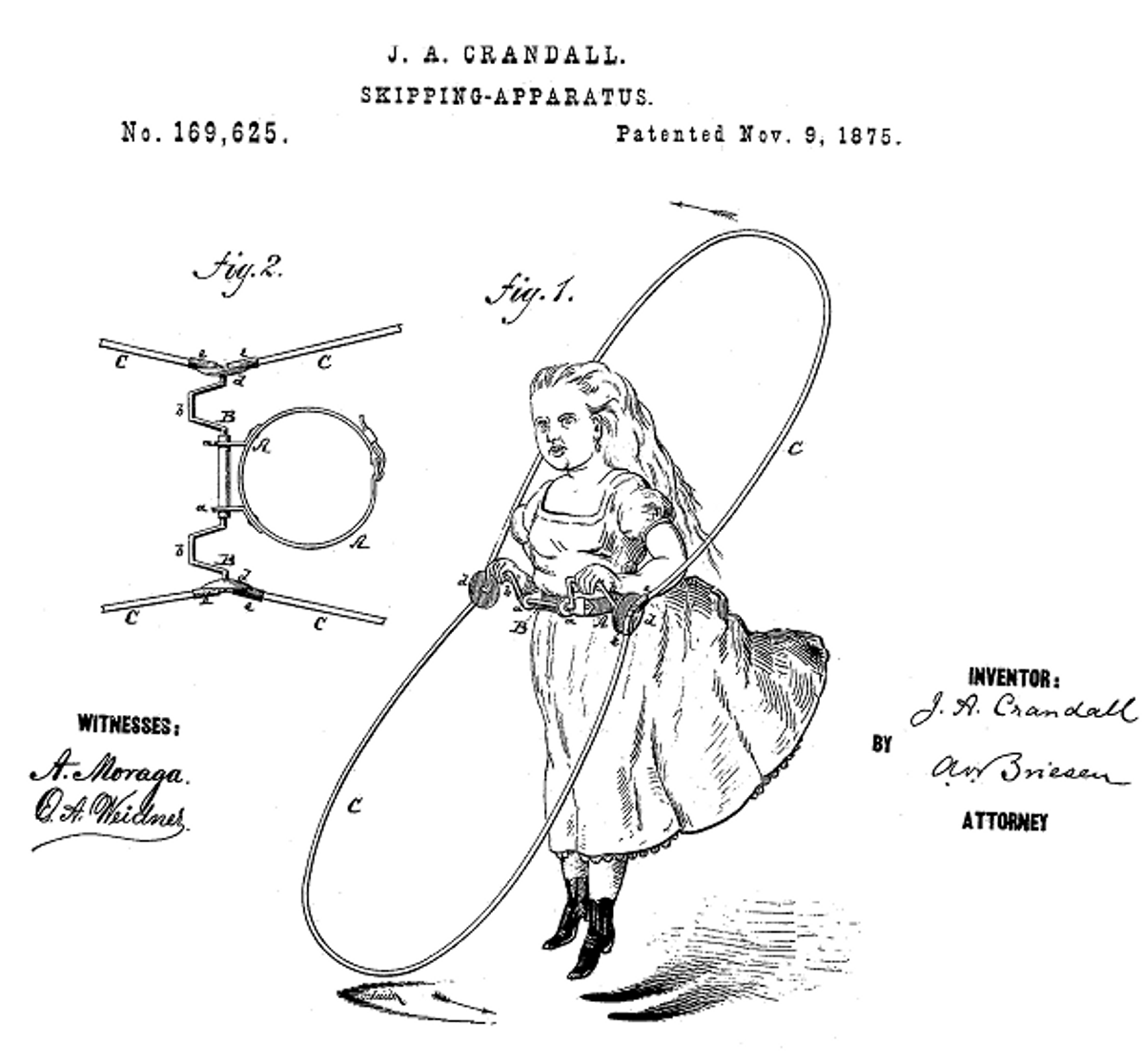 You know, I’ve never been called about this before," Mark Krull laughed into the phone.

Mark Krull is my uncle. He is a retired patent lawyer and inventor living in Bend, Oregon. He is the man behind the Nautilus Select-Tech dumbbells and other successful fitness products. His latest venture is much more ambitious. Along with two partners, Stephen Ihli and Eric Small, he aims to get the sport of jump rope sprint added to the Olympic Games, as soon as the 2016 Summer Olympics in Brazil. They have been working on this new sport since 2010.

Their main promotional material is a narrative film, a faux-documentary version of what has actually happened to them thus far on their quest. JumpRopeSprint is a charming and goofy film, meant for families and has been shown at a series of festivals. Krull, in addition to executive-producing the movie, also worked with Ihli to invent a new jump rope specifically tailored for competition and team training. They sent me a production sample along with a copy of the film.

Jump rope sprint (let's call it JRS for short) is still in early stages of development at a competitive level, but its roots are well established in training regimens for athletes, mostly in track and field. Krull told me that many athletic doctors recommend jumping rope while running as a way to learn the right way to run. You can't heel-strike when you're jumping rope, and the activity helps build knee-drive strength, an essential part of sprinting.

The rules of the infant sport are simple and adhere to USA Track & Field (USATF) guidelines for sprinting events as strictly as possible. The new wrinkles are 1) you must jump over the rope once per stride and 2) any tripping on the rope is cause for disqualification. This necessitates a perfect sense of timing and rhythm in order to maintain a rapid pace, while clearing the rope as low as possible. Krull described JRS as a "total body version of juggling." The video evidence suggest that it's a sort of 'applied hurdles,' where you have to clear an obstacle, an obstacle that you repeatedly create and remove with every stride.

I decided to get out there, #journalism style, and see what it was really like to jump rope sprint. I grabbed the jump rope Krull sent me and walked to the sidewalk to give it a shot. Krull recommended that I begin my training by jumping rope in place, then gradually alternating feet, and finally leaning forward. On my first jump, I landed too early and whacked my thigh with the rope. A linear, purple bruise lingered for days to remind me of my mistake.

I practiced for 15 minutes, the amount of time I was told I would need to become serviceable as a JRS practitioner. This was not enough. I was steady whipping parts of my body and not making it much further than ~30 meters before disqualifying myself. I was not a genius of jump rope sprint, but I did discover the thrill of getting a rhythm down at a medium-high speed. It’s not as easy as it would seem, but it’s fun.

The most recent breakthrough for the sport was inclusion as an exhibition event at the Iowa Games, which is basically the Olympics for people in Iowa, and includes some distinctly Midwestern sports like 3D Archery, horseshoes, and pickleball. For the very first time, JRS will be part of a USATF-sanctioned event, and several 100-meter races will be run between track events at the games. The hope is to use this exhibition as a springboard into other competitions in the near future.

Krull remains realistic about the prospects. "We need energy," he told me, "more people out there working with us." The unfortunate reality for an upstart sport is  the process that leads toward Olympic status is long and daunting. Many hopeful sports have been pruned off even after gaining status as demo sports, like bowling, wushu, and roller hockey. Making matters tougher, the IOC shut down the inclusion of official demo sports after the 1992 Barcelona games.

For such a young sport (barely two years), it seems quixotic to even have Olympic inclusion as a goal at times. Still, there is steady progress. Krull told me a future goal is to get a demo at an event like the Prefontaine Classic, one of the premier events in track and field. The national television exposure at the Pre or a comparable big-time track event could drum up interest in JRS beyond the athletic training world.

While a cameo at a large annual track event might build a significant foothold, leveraging that foothold into a system of youth JRS leagues and international competition will be very difficult. The founders do have one elite athlete on board, however. Lashinda Demus won silver in the 400-meter hurdles in London last week. She owns the American record and third fastest time ever in the event. Demus is featured in the movie and also owns the women's world record for 100 meter jump rope sprint (13.96 seconds). In the film, she discusses the benefits of JRS training for her hurdling. Also featured in the movie is Buddy Lee, who wrestled at the 1992 Barcelona Games. Lee’s post-Olympic resume includes stints as a motivational speaker, jump rope champion, online jump rope salesman, and trainer for Olympians. He has expressed enthusiasm about the prospect of making JRS an Olympic sport, but is, like the inventors of the sport, realistic about the process and inherent challenges.

The International Olympic Committee decrees that a sport cannot be added to the games unless it falls under the jurisdiction of a federation. These federations can be as specific as the Union Internationale de Pentathlon Moderne, which governs solely the pentathlon, or as broad as the International Association of Athletics Federations, which is the somewhat confusingly named federation (association?) that controls most track and field events. However, having a federation, even one that is recognized by the IOC, isn’t enough to get your sport added. Tug of war was an event from 1900-1920, and still has an international federation recognized by the powers that be. Those powers decided in 2009 that every summer Olympics held after 2016 will have 28 sports, with 25 fixed and three that could change every four years, depending on a series of votes by various committees. The IOC is an organization that deeply believes in bureaucracy.

USATF, an affiliate of the IAAF, is the agency that would regulate jump rope sprint. Participation in an existing, IOC-recognized federation like USATF would be a leg up for JRS. Since the activity falls under the umbrella category of ‘Athletics,’ jump rope sprint would not have to displace any other event per the established limits for number of categories of competition. Instead it would merely need to be elevated to Olympic status by USATF and join the extensive list of Athletics events.

Official documents state that for a sport to be added to the Olympic roster, it has to be “widely played,” defined as a minimum of 75 countries practicing the sport. This definition of what makes a sport worthy of inclusion in the games makes sense, since the Olympics are a great exercise in globalization, an exhibition of the world’s best all meeting on one stage. Of course, the significance of Olympic competition is defined not by the universality of the sports but of what happens, the human drama.

The sports played at the Olympics therefore need to be judged by their cultural significance as well. Only 49 nations have ever competed in water polo in the Olympics and only 20 have medaled, but it has such a significant niche in Hungary and other Eastern European countries that its place on the docket is secure. That lack of universality didn't preclude a water polo match from being one of the all-time most dramatic—and memorable—Olympic moments.

Before the 1956 Olympiad in Melbourne, the USSR quelled a bloody rebellion in Hungary, which forced the defending Olympic champion Hungarian water polo team out of the country two months prior to the games. In the semifinal match (known as the “Blood In The Water Match”), the Hungarians beat the USSR 4–0 in a match that was ended early due to excessive violence both inside and outside of the pool. The Hungarian victory didn’t end the bloodshed back home, but the psychic rewards of their subsequent gold medal showing were huge. JRS is unlikely to be a proxy battlefield for the next cold war, unless it suddenly gains a foothold in Iran or North Korea.

The only sports to be included at all summer Olympics since 1896 are swimming, cycling, fencing, athletics, and gymnastics. These sports are elemental. They primarily involve the human body and the limits of its endurance, with the exception of cycling and fencing, which utilize fairly basic equipment. For a sport to be Olympics-ready, it must be simple or it must be of serious cultural significance, or both.

In all likelihood, jump rope sprint will never really achieve broad cultural meaning. The best hope for the necessary massive expansion in participation lies in growing the sports’ popularity within the track and field community. The extant track event of hurdles already channels the basic human skill of jumping over things while running. JRS is really only a variation of size and application. This similarity could serve JRS well or it could hinder it, casting it as a sort of lesser imitator. But steeplechase is already a kind of sexed-up hurdling, and both sports benefit from the similarity. There's no reason jump rope sprint couldn't catch on.

Mark Krull and the other inventors of JRS understand that their campaign for Olympic status is a long shot, one that many sports have tried and failed. They remain very excited about this project, odds  and all.

“Inventors have to have thick skin,” Krull noted. He said that for it to succeed, they need “lucky collisions” to happen at several levels—hopefully just not many collisions between jump ropes and shins.