Todd Akin told two lies, and one of them has plenty of supporters in the media and on the right 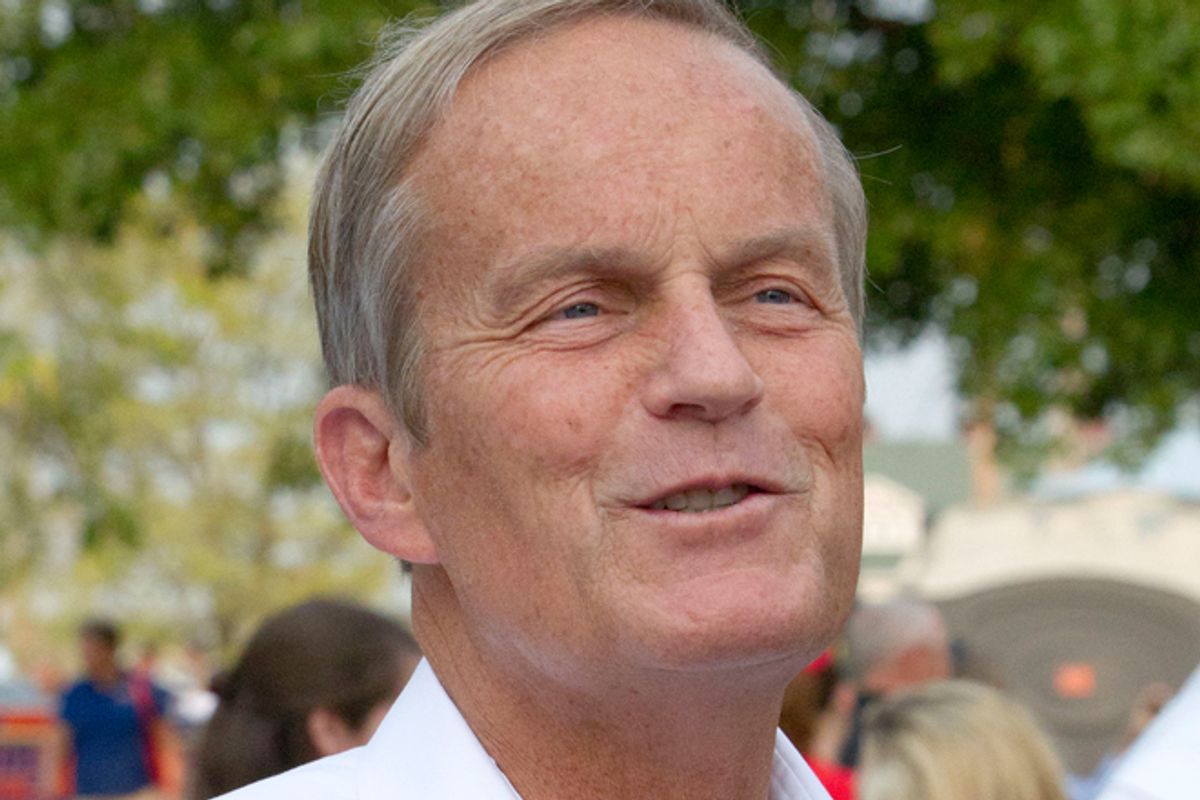 Todd Akin, Republican candidate for Missouri’s Senate seat, forgot himself for a moment and spoke to a reporter (and a TV camera) in the same language that antiabortion activists tend to use mostly among themselves: “It seems to me, from what I understand from doctors, [pregnancies resulting from rape are] really rare,” he said, explaining why he though exceptions for rape in his proposed abortion ban were unnecessary. “If it’s a legitimate rape, the female body has ways to try to shut that whole thing down.” The boldness of the lie captured national attention. Not only did Akin have the balls to invent an internal mechanism in the female body that dispenses nature’s own emergency contraception during a rape, but he also invented imaginary doctors to back up his claim.

But while we all boggle at Akin’s utter disregard for biological fact, let’s not forget that on top of making stuff up about pregnancy, Akin boldly insinuated that many, if not most, rape victims are lying. Unlike with the “rape is contraception” lie, unfortunately, Akin has a lot more social support for his suggestion that most rape is not “legitimate.” Akin may have gone a step further into the Twilight Zone with his belief that a woman who got pregnant secretly wanted it, but the narrative that women lie about rape in order to cover up their own slutty behavior shows no sign of disappearing from our culture soon.

The notion that women frequently accuse innocent men of rape was the centerpiece of Politico reporter Dave Catanese’s Twitter defenses of Akin.  “So maybe. Just maybe, @ToddAkin didn't really mean 'legitimate.' Perhaps he meant if 'someone IS really raped' or 'a rape really occurs',” Catanese argued. As a prophylactic against criticism for invoking the “lying slut” stereotype, Catanese followed up by accusing anyone who doubts the widespread mendacity of the fairer sex of terminal liberalism: “So perhaps some can agree that all rapes that are reported are not actually rapes? Or are we gonna really deny that for PC sake?” Bryan Fischer of the American Family Association put it more bluntly: “What Akin meant by "legitimate rape:" actual forcible rape, not consensual sex that later gets called rape. Come on, people.”

Of course, if Catanese and Akin were really speaking of a small minority of reported rapes that are actually false reports, that wouldn’t have any bearing on the topic of rape exceptions. No one on the left disagrees that a small number of reported rapes come from women with mental health problems who are prone to fabrications, though it’s worth noting that a false report is not the same thing as a false accusation. But so what? That a small percentage of women claiming to be raped are lying has no bearing on the 5 percent of rape victims who get pregnant from the assault. Bringing up the specter of false rape claims in a discussion about the majority of absolutely true rape claims only makes sense if you don’t accept that the majority of women who “cry rape” are telling the truth.

The myth of the false rape accusation tends to go as such: A woman is a terrible, dirty slut who gets drunk and soils herself by having sex with a man. She wakes up in the morning, and crushed by the terrible shame, she decides that no one must know that she would do anything so outrageous as consent to have sex with a man. So, in order to conceal her secret shame, she calls the police and accuses her innocent bedmate of rape. What could be a more brilliant way, after all, of hiding her sluttiness than going over her sex and dating life with the police, then the prosecutor, then the victim’s advocate and then finally the defense attorney? How better to hide your partying ways from your mother than a public trial where every decision she made that night is painstakingly discussed over and over by a hostile defense attorney in front of a crowd of people? Having a long, drawn-out trial that can take months or years is clearly the best way to put a night of regrettable sex behind.

These kinds of questions tend to get overlooked in the public discourse around rape because of stereotypes that paint women as irrational creatures who are apparently too short-sighted to imagine what’s going to happen in the few minutes after dialing 911, much less in the years afterward. Do a handful of such women exist? Certainly the human race is large enough to encompass such individuals, but it’s asinine to imagine that they do in such large numbers that the “lying slut” contingent encompasses the whole of women who turn up pregnant after a rape.

The illogic of the lying slut narrative hasn’t done much at all to prevent it from becoming a major and often dominant narrative around pretty much every rape case that makes national news: Julian Assange, Dominique Strauss-Kahn, Roman Polanski, any athlete accused of rape. Outside of Jerry Sandusky, who made the mistake of targeting young boys, the accuser in a rape case is swiftly accused of consenting to the encounter and then, instead of just pretending it never happened, calling the police to sign up for a chance to have her reputation dragged through the mud.

The widespread belief that women lie so frequently about rape has serious effects. The arrest rate for rape is 25 percent, compared to 79 percent for murder and 51 percent for aggravated assault. That’s just counting the reported rapes; many rape victims don’t bother to report at all out of reluctance to deal with being accused of lying sluttitude. Considering that most rapists are serial rapists who will attack an average of six women, the lack of consequences for rape directly leads to more rapes. As for women who get pregnant after rape and need to employ one of those handy rape exceptions? Well, they’re out of luck. Medicaid has a rape exception in its ban on abortion funding, but only 37 percent of women who qualify for it actually get past the bureaucracy and fears about female mendacity to actually get the money.

Traditionally, antiabortion activists who refuse to allow for exceptions for rape will at least be commended for their consistency in believing that this really is about “life,” and not about punishing women for sex. Akin’s comments make it clear, however, that this is not actually what’s driving the refusal to make exceptions for rape victims. For many opponents of rape exceptions, the concern has little to do with “life” at all, but instead goes straight back to their overwhelming fear that women are consenting to sex and weaseling out of their due punishment.