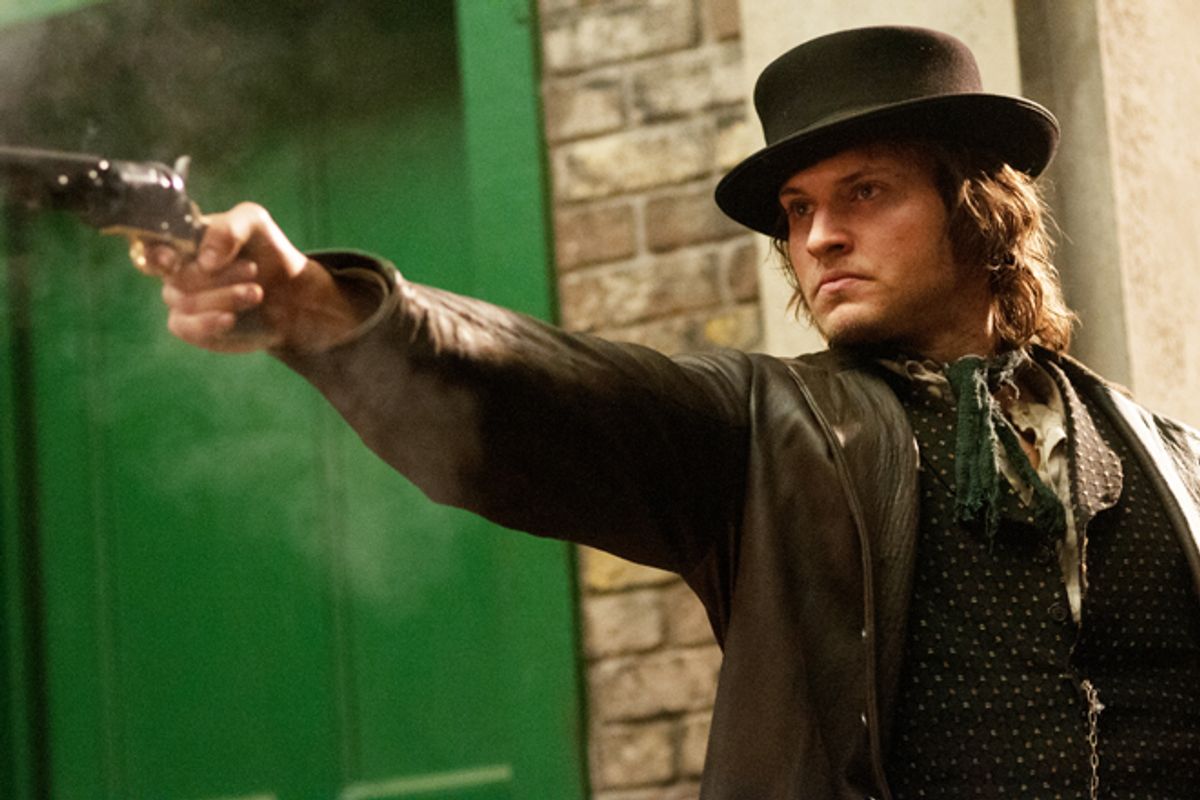 “Copper,” BBC America's first foray into scripted television, premiered last night. It's "Gangs of New York” turned into a serialized series. Set in 1864 New York City, the Draft Riots and their attending racial tensions barely past and the Civil War still ongoing, “Copper” focuses on Kevin Corcoran (Tom Weston-Jone), an upstanding detective working the mean streets of the Five Points. As the description suggests, “Copper” is the latest show that would like to be awarded an “A” for ambition — it’s a historical period drama set in a moment rife with meaningful similes about the present day and starring a tortured macho man! — but the only “A” it deserves is for absurd facial hair. (I know the bushy mutton chop was once a real beard-style, but it’s hard to take a guy seriously when his ears appear to be sprouting topiary.)

I fear that I’m beginning to sound like a broken record about shows like “Copper,” the ones that tick off all the “serious drama” boxes, and still suck, and yet, they continue to be churned out. We’re deep into the serious drama copycat phase, with shows like “Copper” hoping to wheedle their way into the conversation by aping some far superior progenitor (in this case “Deadwood" or even "The Shield") instead of trying something new. I recognize that any drama attempting to take on serious themes seriously is a relative rarity these days, but seriousity (and I know, I know, seriousness is already a word) is not such a rarity that it should trump enjoyability.

"Copper" is the following kind of show: In one scene, exemplifying the series' standard level of dialogue, we learn Corcoran 's 6-year-daughter is dead after a friend says, ”Finding this girl ain't gonna bring your daughter back.” At the time, Corcoran is digging a grave for the aforementioned "this girl," and a minute later the camera pans away from the fresh grave to his daughter’s gravestone, in case you didn't get it before.

It doesn’t end there. “Copper” looks cheap, the lighting something out of a daytime soap opera. Corcoran ’s shiny leather coat seems borrowed from Morpheus’ closet. The acting — except by one preternatural 12-year-old playing a drug-addicted whore — is middling (even with the great Franke Potente in the cast). The Irish-English-American accents are all over the place, which would be fine — this is the melting pot and all — except that every third person has the place-less American accent of a news anchor. There’s an African-American surgeon who helps Corcoran solve crimes by doing 1864-era "CSI"-examinations on the bodies. (A cop procedural set in 1864. Now that at least would have been campy.)

And then there's the antihero of it all. In 1864, there was a different standard of  law and order in New York City, the cops mistrusted and corrupt by default. Corcoran is operating under a different code of morality than today’s brass, and so, yes, he pinches a little cash off a solved bank robbery and tries to beat a confession out of a suspect. But Corcoran is not supposed to be some Civil War-era Vic Mackey. Even if he uses questionable interrogation tactics, he’s still a good cop (“In 1864, he was New York’s Finest” goes the show's tag line), smart, dedicated, just, unwilling to let the rich run over the poor. He’s not really an antihero, he’s a hero, but one who commits outrageous acts of violence against bad guys (see, in particular, the climax of episode two).

These bloodlettings are the New York City version of frontier justice, giving pedophiles the fate they deserve, but they are also gruesome and nasty and unpleasant to behold.  It's impossible to enjoy them, and equally impossible to shake the sensation that we are supposed to enjoy them. "Copper" can't quite recognize the main character it has created — the good guy, tragically unhip as he may be — and so it ends up glorifying violence in an uncomplicated way, which the shows it's copying, starring far more evil characters, never did.