Get ready for Vice President Hillary!

If Romney really wants to be president, he must replace Paul Ryan with Hillary Clinton on his ticket ASAP 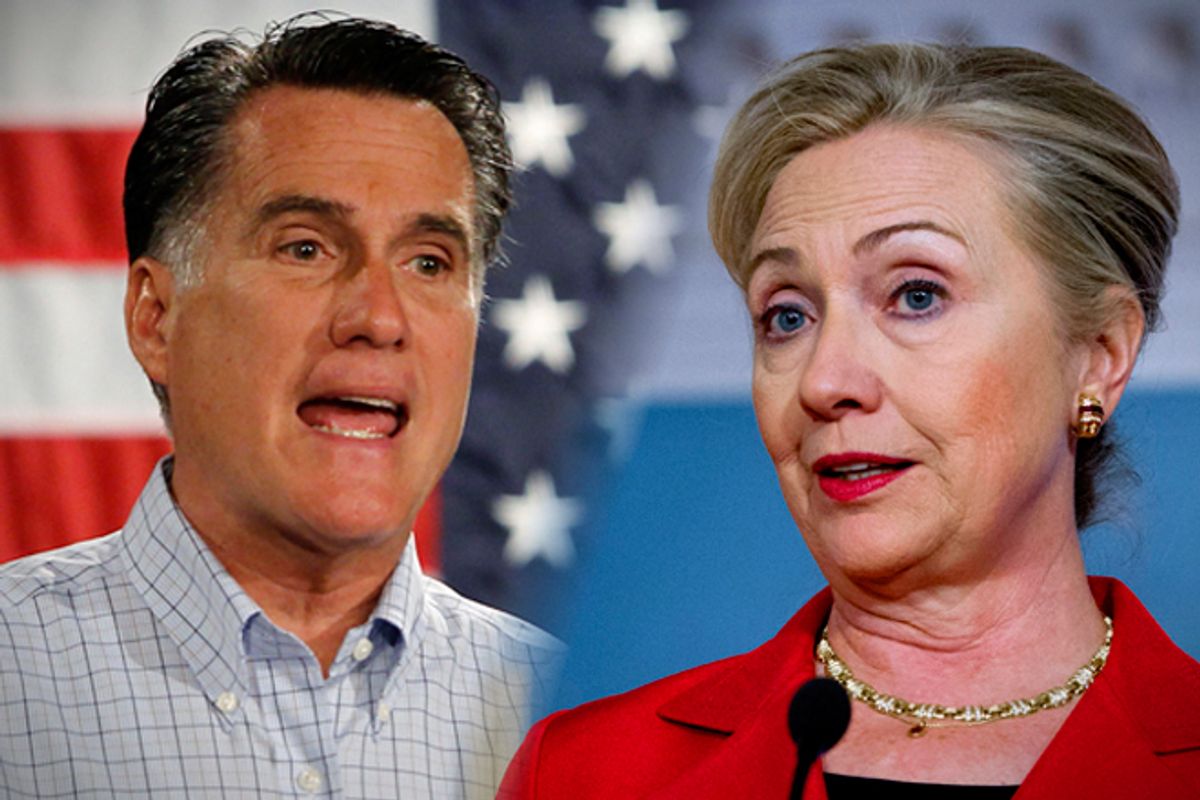 I'm hearing a lot of speculation in politics circles these days that there's a running mate switch in the works. It's unusual but not unprecedented, and while it seems like a wild idea at first, the more I think about it, the more sense it makes. Just based on the many very substantial things I've heard from really connected people, I think there's a very good chance that Mitt Romney will dump Paul Ryan from the Republican ticket and replace him with Hillary Clinton.

I'm obviously not the first one to suggest it. In fact, these days, it seems like everyone -- Republicans and Democrats -- thinks it'd be a good idea. It's something people have been saying to me everywhere from cocktail parties to airports ever since Romney chose Ryan.

Here are the facts: Paul Ryan is a definite drag on the ticket. Whereas Mitt Romney is running as a Washington outsider, a successful businessman turned successful governor, Ryan is a longtime member of the most hated branch of the government with no private sector experience to speak of. His name recognition is negligible nationally, and those who have heard of him know him as the guy who wants to slash Medicare. Ryan has probably made winning Florida -- a must-win Romney state -- all the more difficult for Romney. The moderates and disaffected former Obama voters Romney needs to win are repelled by Ryan, and, even worse, he motivates disenchanted Democrats to turn out and vote against him.

Ryan's also a major distraction for the ticket. Does any nominee challenging an incumbent during a weak economy really want TMZ running photos of his running mate shirtless? Does America want to know about the vice president's late-night infomercial workout routine, and ill-fitting wardobe? It's doesn't just embarrass the party, it embarrasses America before the entire world.

It's obvious that Ryan's not ready for the big stage of a national campaign. The gaffes just keep piling up. Even before Ryan was selected there was his notorious "flip-flop" on Ayn Rand. After spending years crediting Rand's abhorrent philosophy for his decision to enter public service, Ryan suddenly decided he didn't actually like the extreme atheist author. The problem is he's on tape praising her. Effusively. There's no backing out of it.

Then, this past week, Ryan idiotically lied about requesting stimulus money. Having taken the money would've been survivable -- Ron Paul himself regularly takes earmarks, and Rand herself said taking government money was justifiable as "restitution" -- but to have asked for it and then lied about it is yet again just giving Romney's opponents ammo.

Picking a vain lightweight like Ryan was a staggeringly poor tactical decision, but thankfully for the Romney campaign, it's nowhere near too late to fix it. There are rumors swirling in Washington that Bill Clinton is quietly urging Hillary to ditch Obama entirely, especially since it's now clear that the president has no intention of replacing Joe Biden, a reliable campaigner and loyal ally, on the ticket. But with the Republicans, she'd again have the chance to make history.

The party's in long-term trouble demographically. Its opposition to gay rights is a loser in the long run and everyone knows it. Vice President Hillary Clinton, though, immediately wins the ticket the support of a substantial portion of the gay community. Romney obviously needs to improve his support among women -- many of whom still see the GOP as hopelessly backward on reproductive health issues -- and Hillary Clinton is definitely a woman. Sure, the party might not like that she's pro-choice, but their nominee was, too, a couple of years ago.

The Republican ticket is currently historically weak on foreign policy, and they're running against the guy who took out bin Laden. Thankfully, there's no one better equipped to undermine Obama's foreign policy superiority than his own secretary of state. She's got undeniable expertise and her history of supporting most American military campaigns will even endear her to the party's hawks.

And obviously Hillary Clinton is one of the most popular politicians in the nation right now. People remember her husband's stewardship of the economy fondly, she'd instantly put a number of "blue" states in play, and once in office she could help usher in a new era of bipartisan cooperation that would help deliver on Obama's failed promise to unite the nation.

There are a thousand other reasons why Clinton makes more sense on the Republican ticket than Ryan, which is why so, so many very serious pundits and longtime political observers have lately been predicting the big switch. Frankly Romney would be a fool not to replace Ryan with Clinton, as soon as possible. It would be an act of sheer, suicidal idiocy to allow that clown Ryan to remain on the ticket when Clinton is so obviously superior and probably eager to make her services available. So get ready for a major RNC surprise. It's definitely, definitely on the table. Bob Woodward told me.