Romney says he would not oppose abortion in instances of rape; but Paul Ryan's record looks a lot like Todd Akin's 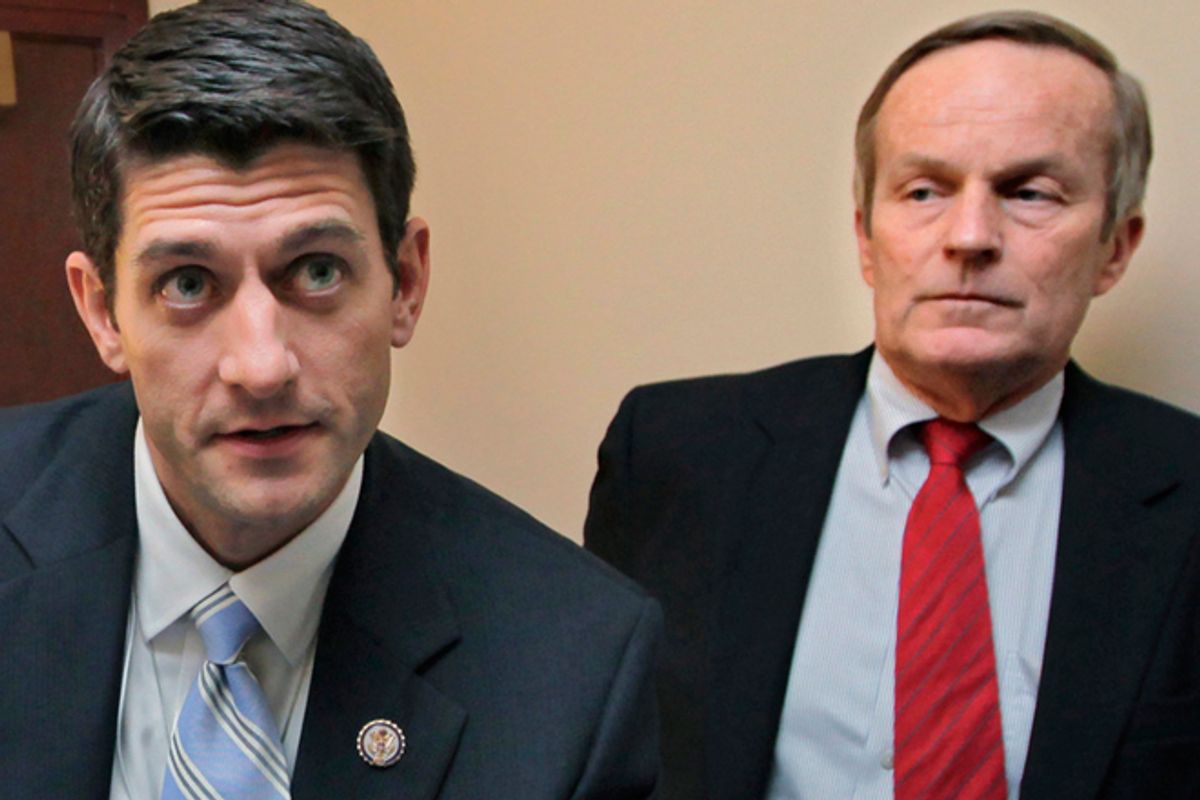 Mitt Romney and Paul Ryan were quick to flee Rep. Todd Akin’s drowning ship after he said that victims of "legitimate rape" magically don't get pregnant, but a closer inspection reveals that Ryan’s views on abortion are not that different from Akin’s. “Governor Romney and Congressman Ryan disagree with Mr. Akin’s statement, and a Romney-Ryan administration would not oppose abortion in instances of rape,” a Romney spokesperson said in a statement late last night.

Romney, of course, has a bipolar relationship with the issue of a woman’s right to choose, but the spokesperson's statement represents a flip-flop for Ryan, who has proposed and supported legislation that would outlaw abortion with no exception for rape. Ryan has earned a “100 percent pro-life voting record” from the National Right to Life Committee during his 14 years in Congress. NARAL, the pro-choice group, looked at 59 key votes on abortion, and found that Ryan voted the anti-choice position on every single one.

He co-sponsored “personhood” legislation that would give fetuses “all legal and constitutional attributes and privileges.” If enacted it would ban abortion care in almost all cases, including rape or incest. The head of the main group pushing personhood legislation said, “In supporting Personhood, Congressman Ryan has taken a consistent pro-life position, one that is called for by the Republican Party's own platform.”

In a 2010 speech called “The Cause of Life Can’t be Severed From the Cause of Freedom,” Ryan compared the Supreme Court’s Roe v. Wade abortion decision to its Dred Scott v. Sandford decision, which sanctioned slavery. “Twice in the past the U.S. Supreme Court -- charged with being the guardian of rights --- has failed so drastically in making this crucial determination that it ‘disqualified’ a whole category of human beings, with profoundly tragic results,” Ryan said. The first, he said, was Scott, and the second was Roe, “when the Supreme Court made virtually the identical mistake” it had made in the slavery case.

He also co-sponsored a measure that would force a woman to undergo an ultrasound before she can receive an abortion, even if her doctor doesn't recommend it or she doesn't want to. Last year, Ryan joined Akin and other Republicans in co-sponsoring a bill that would have redefined rape so as to narrow access to federal funding for abortions (under the bill, only women who were victims of "forcible rape” would be eligible). That language was eventually shelved after a national outcry from Democrats and women's rights advocates. Ryan also voted against letting U.S. troops get abortions at military health centers.

This is just one more area where the Obama campaign is eager to attack the Romney-Ryan ticket, and they've already done so in the wake of Akin's comments.