It's after 6 p.m., and Todd Akin is still on the Missouri ballot. Why did he remain in the race? 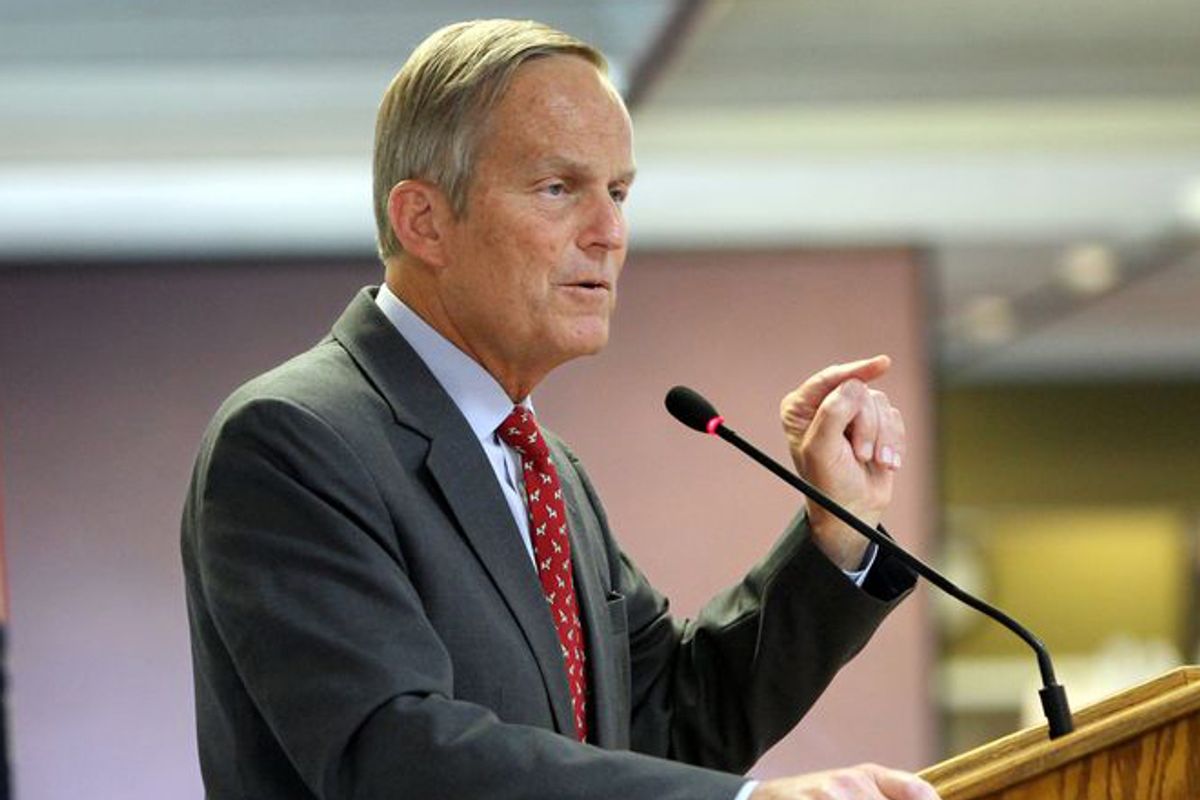 Todd Akin declared Tuesday that he would not drop out of the U.S. Senate race in Missouri. Most East Coast journalists and politicos I’ve spoken with cannot fathom how Todd Akin could possibly remain a candidate. As a former Missouri politician who knows Akin, perhaps I can shed some light. Here are 11 reasons why he didn't quit:

Often, party leaders will ease younger candidates out of races with promises of support for some future nomination. That won’t work with someone who gave up his House seat to run and who clearly doesn’t have a political future if he bows out.

2. His opponent, Claire McCaskill, hasn't polled over 45 percent for 18 months.

This nomination is worth something when you have an incumbent who, when paired against just about anyone, has hovered in the low 40s since last spring. Most political scientists and operatives assume that most of the time, late-breaking undecided voters favor the challenger approximately 2-to-1, so any challenger appears to be in good shape.

3. He's never been a deal-cutting legislator.

A leopard doesn’t change his spots. Akin has always been a true believer, and not a typical pragmatic pol, so it's not in his character to cut a deal now.

4. His base is sticking.

Since he first got into politics, Akin has been a crusader for social conservative causes. Whether it was in support of home schooling or against abortion and gambling, Akin has not given an inch. And so the folks he stood up for are sticking with him, and for that matter, so is Mike Huckabee, whose support was critical in the primary.

The national party’s vow to withdraw financial support doesn’t bother him as much as it would most pols, since he’s been outspent in his two major primaries. As he has said, God has always pulled him through.

6. The establishment has never supported him.

In politics and life, you listen to the people you know and trust. Since the Republican establishment in Missouri and in D.C. never supported him, he owes them nothing now.

7. He has all the leverage.

He is the nominee in a state that Republicans must win if they are to take back the Senate. The National Republican Senatorial Committee and Karl Rove’s Crossroads GPS are not going to spend hundreds of millions around the country and then leave Missouri on the table out of stubbornness. Akin, an anti-gambling fanatic, should be smart enough to call their bluff.

An overnight poll by a respected firm taken after saturation coverage of Akin’s plight suggests that this whole affair didn't change many minds; Akin still leads by a point.

9. The worst is probably over.

If he quits now, he's a punch line forever; if he sticks, then (based on No. 9) he has a 50 percent chance of being a U.S. senator as well as a punch line.

10. Wounds take time to heal – especially when people pick at them.

John Brunner, a multimillionaire businessman whom Akin defeated in the primary, is positioning himself to step into the void if Akin quits, and some think he’d be a logical choice since he wouldn’t be burdened with fundraising and has no legislative record to defend. But Akin is still smarting from Brunner's attack mailers in the primary, which compared Akin to Obama. And I suspect he doesn’t appreciate Brunner making his interest known so brazenly – and so soon after Akin’s misstep. The idea that Brunner, whom Akin just vanquished while being outspent approximately 5-to-1, could waltz in to replace him must make him seethe.

11. God told him to run and it may take God to tell him to quit.

Missouri politicians who have in the past tried to negotiate with Akin describe it as sort of like trying to negotiate with Ahmadinejad. He is a zealot, in every sense of the word. As one top Republican said this morning, “It’s hard to reason with an idiot.” Or maybe, it’s just hard to use worldly logic on someone who is divinely inspired.

Jeff Smith is Assistant Professor of Politics and Advocacy at The New School’s urban policy graduate program. Jeff, who served in the Missouri Senate from 2006-2009, is also a political advice columnist for City and State whose writing has been featured in Inc., National Journal, The Atlantic, Salon,CNN.com, the Chicago Tribune, Washington Examiner and St. Louis Post-Dispatch.