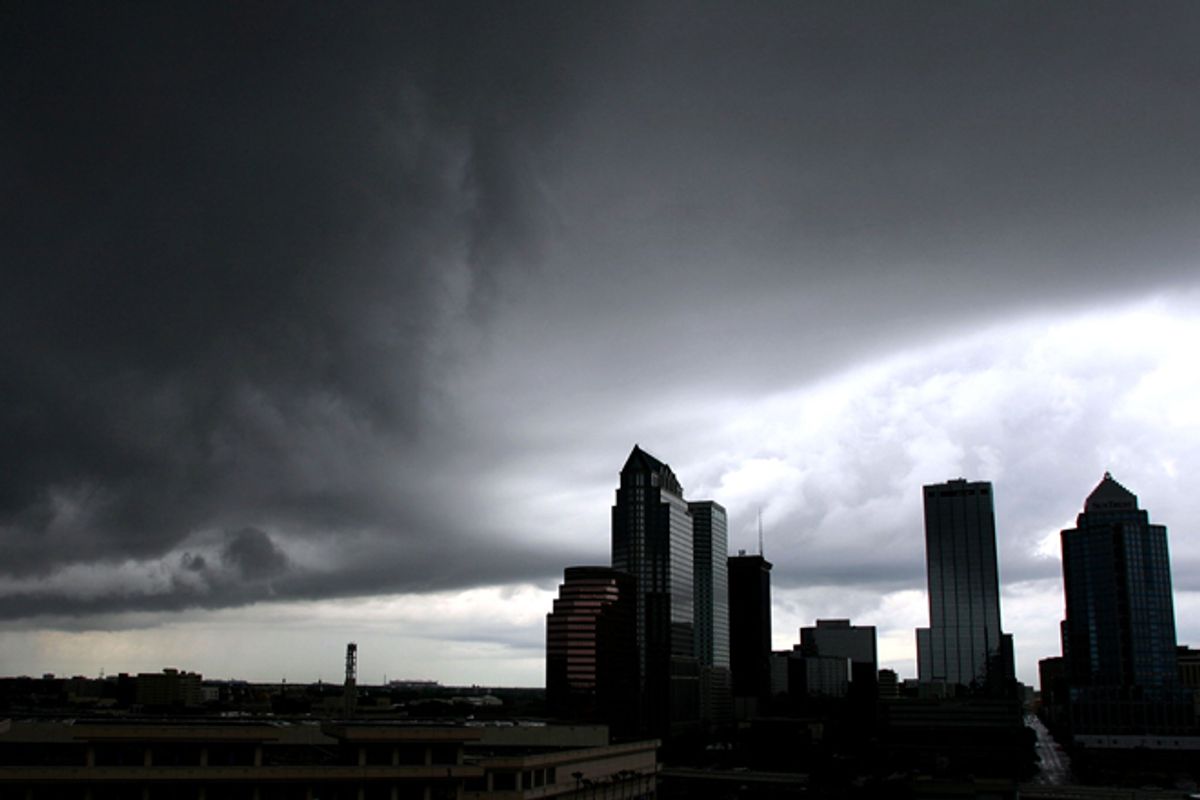 Oh no, a hurricane might strike the Republican National Convention in Tampa! Weather scientists say a little "tropical system" in the Atlantic could head up to Tampa this weekend and become a hurricane named Isaac. Also, fun fact: Tampa is terribly vulnerable to hurricanes. Vast numbers of Tampa residents live in areas that would be overrun in the event of a major storm surge. The city is more vulnerable every year, since sea levels are rising due to global warming God loving the Earth so much that he's hugging it real close and accidentally melting the ice caps.

According to Climate Central’s research, sea level rise is escalating the threat of damaging storm surge flooding in the Tampa area. The odds that a flood exceeding 6.5 feet would occur in Tampa before 2030 are about 14 percent without global warming, but these odds increase to 20 percent with the effects of global warming-related sea level rise factored in.

A "worst-case Category 4 hurricane in the Tampa Bay region" would put the Tampa Bay convention center under 20 feet of water, "and St. Petersburg would become an island, as occurred during the 1848 hurricane."

Also (and I haven't confirmed this with any scientists but it seems likely) a hurricane during the convention would likely cover much of Tampa in tarballs and toxic dispersant-mixed oil from the Deepwater Horizon spill. And perhaps mutant crabs. Obviously I'm not hoping for this to happen (because I will be there, in Tampa), but if it does happen the oil-soaked Republican convention-goers can't say they weren't warned.

Tampa is best known, as Will Doig wrote, for being the perfect embodiment of everything bad and awful and depressing about American cities, with 50 percent of the urban core devoted to parking. In addition, Tampa is often called "The Lightning Capital of North America," because if you aren't killed by a car or a hurricane while visiting Tampa you will probably be struck by lightning instead during one of its constant summer thunderstorms. Tampa is also known for its baseball team that plays in the worst stadium in Major League Baseball (actually in St. Petersburg) and that has no fans even though they're usually pretty good, and also its crappy football team that is constantly blacked out but at least their stadium has a cool pirate ship.