Now that I'm a mom, I shudder to think of what a snoop I once was -- and how many naughty secrets I learned 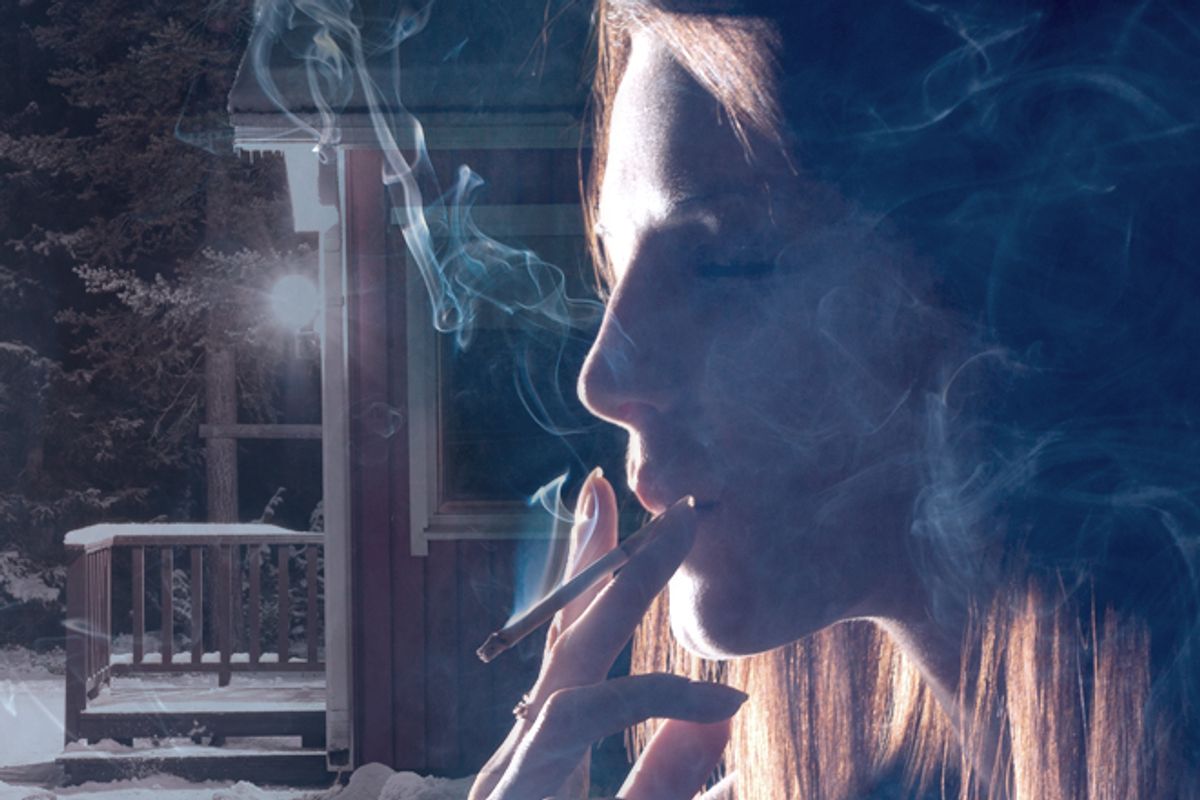 When my son turned 6 months old, I began looking for a baby sitter. Not just any baby sitter would do: I imagined a modern-day governess. A brainy, artsy, warm college student. Part of me wondered if my desire to have the “perfect” baby sitter was just another form of helicopter parenting. After all, I could easily hire the high school kid down the street for half the price.

Then again, I was the kid down the street many years ago. And I remember what that was like.

My baby-sitting career began one early summer day in Rockville Centre, Long Island, circa 1986, when I posted an index card advertising my services on a corkboard at the neighborhood market. A mother called me a few days later. Her baby was 8 months old – I had just finished the eighth grade. Looking back, I’m not sure what she was thinking, hiring a kid to baby-sit. Probably something along the lines of, “Please, God, get me out of this house.”

On my end, I wanted spending money for movies and rubber Madonna bracelets. My two older brothers had been raking in extra cash with paper routes, pool and Ping Pong competitions, and poker games ever since I could remember. Plus, I loved babies – at least the idea of them. The day of my big baby-sitting interview, I trotted the two blocks down from my parents’ house and knocked at the front door, sweaty and nervous in my best shorts and tank top. It was my first job interview ever. I brought along a typed resume highlighting my extracurricular activities and 4-H baby-sitting certification.

Melissa’s mother invited me inside, poured me an iced tea, and showed me around. (Her daughter's name wasn't actually Melissa, but I'll call her that.) Her house seemed straight out of a cereal or floor wax commercial – the eat-in kitchen with windows overlooking a sunny yard; a carpeted basement playroom stocked with an array of educational toys; upstairs, the perfect little girl’s room painted a dusty rose; the smaller bedroom beside it awaiting the son who would come next. Quiet. Calm. Compared to my house, anyway. One baby had nothing on the noise of my two brothers and their high school friends, much less my father on his bad days.

“When can you begin?” she asked me.

Melissa must have been an easy baby, because I don’t recall any catastrophes when I was at the helm, or even much in the way of crying. Or maybe 14-year-olds have the proper amount of energy to care for children, as opposed to almost-40-year-olds. Besides, things were more laid back in the 1980s -- no limit to “Sesame Street” viewing or plastic toys.

Things got really interesting once I hit the ninth grade and graduated to evening baby-sitting. My employer’s husband would return home from his job in Manhattan and the two of them would go out to dinner with friends, or to a cocktail party. I’d walk over, and Melissa’s mom would be putting on her earrings and lipstick, getting ready to pick up her husband at the station on the way to dinner. According to a business card I spotted on the kitchen counter, he worked as a vice president for Seiko. Further investigation led me to the discovery that he modeled on the side. His “book,” an oversize leather portfolio of modeling work that he occasionally left by the front door, captured him in various poses of “handsome, successful businessman” – the perfect husband to complement the perfect wife and pretty daughter.

I needed to know more. I became a snoop. Clues left out in the open were just the beginning.

Some nights, Melissa was already sleeping when I arrived; other evenings she needed a mere half-hour of television or playtime and a few stories plus a bottle before bed. I had time to spare. It began with an innocent enough look through the bookcase in the den where I sat watching TV, doing homework and occasionally calling a friend while the baby slept. There was some Gore Vidal, a John Cheever, a book about Hiroshima and “The Rise and Fall of the Third Reich" – intimidating, masculine-looking books about war and battles. Then, tucked into a bottom shelf, I found it: “Nine and a Half Weeks.”

This was the book version that inspired the naughty 1986 Mickey Rourke-Kim Basinger film. I’d never read anything like it. At that point, I’d never seen a sexy movie or even a piece of lingerie other than the clinical padded white bras my mother wore, or my own new cotton training bra. I hadn’t even touched myself on purpose yet, much less kissed a boy. The closest I’d come to expressing or exploring my sexuality was when I’d hold in my pee and make my blanket lumpy at night in bed, feeling the pressure build up against me. When I read Judy Blume’s “Deenie,” the young-adult novel about masturbation, I imagined the main character’s “special place” where she touches herself at night to be a genie-like magical spot somewhere around her belly button. When it came to boys, I had crushes on them, deeply felt ones, but hadn’t made it beyond the one-sided stage where I liked them, and they ignored me.

When I fantasized – on walks home from school or before bed – it was either age-appropriate (about the boy in chorus with the crush-worthy bowl haircut leaning in for that very first kiss) or else a very adult, if ambiguous, story line involving free love, a key party and a big house where each room opened up into another possible sexual partner. Where I picked up that little fantasy, I have no idea. But even the group sex orgy was sanitized – I didn’t imagine body parts, or sex acts, just kissing and a 1970s sort of lovemaking that might happen after the lights aboard the Love Boat were dimmed for the night. “Nine and a Half Weeks” was a completely different story.

Here was sex, raw and without romance – tying up, withholding, eventual satisfaction. I read and read, rolling up a blanket under me on their couch, pressing into it. Soon, I graduated into exploring upstairs. Gingerly, early on in the night when I didn’t think there was a chance of being caught, I’d tiptoe into the master bedroom and enter a grown-up, never before seen world. This couple was younger than my parents, wealthier than my parents, and much sexier than my parents.

Their closet was a revelation. Nighties, lacy bras, underwear that could only be called panties. (My mother’s underwear came up high and rested right below her belly button, the kind I’d later wear right after my  c-section.) I fingered the lingerie, appreciating the silk and satin, the filminess and flimsiness, the figure and money one must have to acquire a dresser drawer full of such things. Once, I dared to try on a black padded bra of hers, knowing I was evil and practically stealing. It was worth it to imagine myself a woman.

Then one evening I saw them. Penthouse magazine. Stacks of them.

I’d never read, or imagined, such things. I got off on those letters – what sexy words – but the best part by far had to be the photo spreads: girl on girl scenes filled with wet breasts pouring out of white T-shirts, a model touching herself like I’d been doing downstairs to “Nine and a Half Weeks,” friends taking showers and licking one another’s nipples. I wouldn’t allow myself to linger too long upstairs – I had a job to do and certainly studying up on old Penthouse issues was not in the 4-H baby-sitting manual. I couldn’t risk getting caught.

Back downstairs I’d graze my fingers over the chips and cookies they’d stocked the pantry with before grabbing my pack of cigarettes and heading out to the backyard to furtively smoke as now it was almost 9:30 (weekday) or 11 (on a weekend) and they really could be home at any minute. I’d smoke the illicit cigarette halfway down, and then, in a panic, either bury the butt deep in their yard or else wrap it in toilet paper and stick it in the bottom of my school knapsack. The remainder of my baby-sitting time would be spent trying to air myself out; smoking seemed even worse than Penthouse reading, tied for evil with bra trying on.

“How’d everything go?” Melissa’s mother would ask when they returned home.

I’d smile, calmly looking up from my homework.

“She didn’t wake up,” I assured them.

The Seiko model husband would drive me home, a ride I found at once embarrassingly intimate and breathtakingly sexy. I couldn’t imagine being married to a man that handsome, that worldly. He tipped well, too.

I made a mental note: Never hire a high school student to baby-sit.