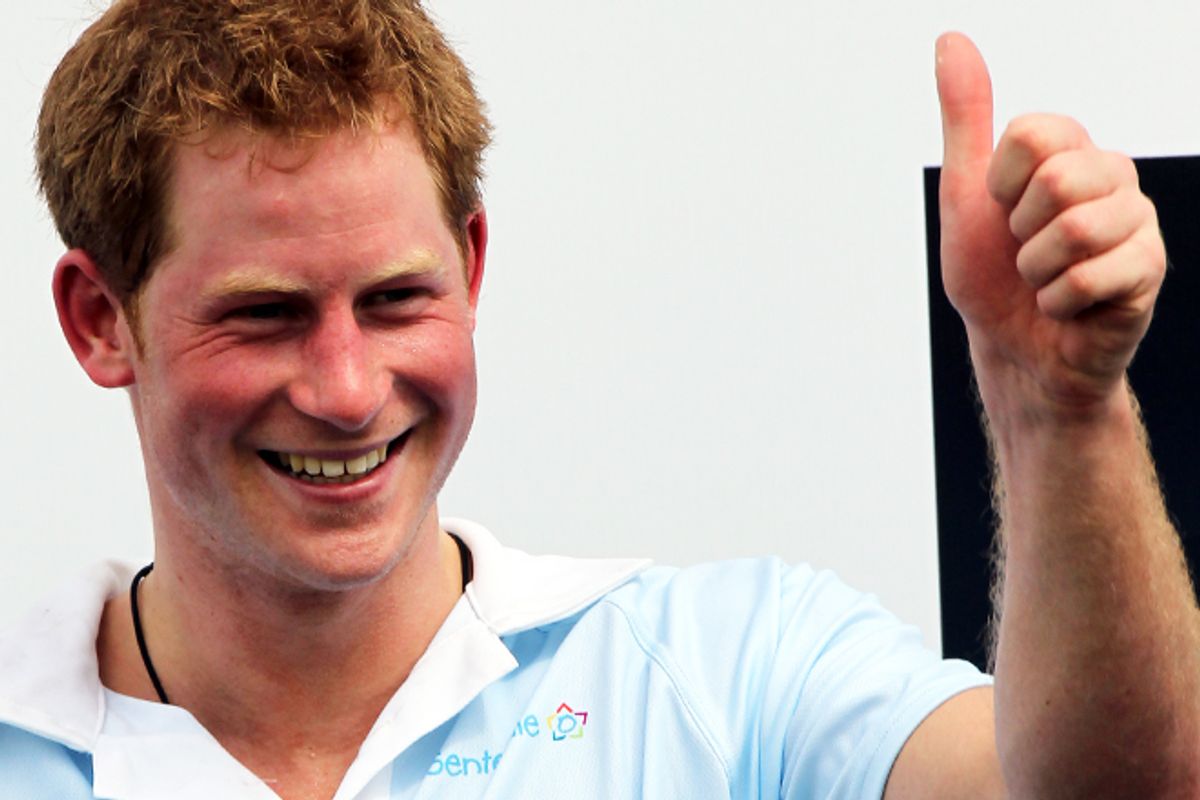 Thank you, Prince Harry. Last weekend, you went to Las Vegas with your bro Ryan Lochte and did exactly what we like to see our royals doing. You "cavorted." You "romped." And it goes without saying that you "frolicked." Naked, of course. Jeah!

Inevitably, it was TMZ that broke the story, involving the two gentlemen meeting some young ladies, inviting them up for a game of strip pool (apparently strip pool is a thing; expect to see a New York Times Styles feature on it soon), and an ensuing romp and frolic. In one of the blurry photos, the prince modestly covers his royal jewels while a nude female stands behind him. In the second, he appears to be giving a hug – or something -- to a female from behind. You can't see much; TMZ helpfully obscures his posterior orifice with a red star. So there you have it. Underneath his clothes, the prince is naked. With a penis and buttocks and all. On Wednesday a royal family spokesperson said only of the incident, "We have no comment to make on the photos at this time." Because, really, what else would they say? "Nice ass"?

Royal author Robert Jobson told Reuters Wednesday that the prince would likely face "a few raised eyebrows" from his family when he returns, and added, "He's a single guy, he's enjoying himself, but it's all about the reputation of the royal family. Everyone might say he's a cool guy, but it's not all about being a cool guy if you're third in line to the throne."

Actually, that's exactly what it's all about. What's great about the whole Vegas shenanigans is precisely that reminder: wearing the crown shouldn't mean that you're always on good behavior. I'm not saying that Buckingham Palace should turn into "Game of Thrones," but my God, we even name our genital piercings after royalty. We like them a little naughty. Not partying around in a Nazi costume or using racist epithets naughty, mind you, just being oversexed and improper and scandalous naughty.

You can go all the way back to the Romans for evidence, but we can even just stick to modern times and make a case. There's Prince Albert of Monaco, who has sired at least two children out of wedlock with different women. His sister Stephanie has had three children out of wedlock, and has never named the father of her youngest. Sweden's King Carl Gustaf allegedly has been known to indulge in "wild, alcohol-fueled orgies and naked Jacuzzi parties with models," which are probably even more awesome than they sound. Harry's uncle Andrew used to date softcore actress Koo Stark, and his dad married his mistress. In the scheme of things, a little stripping down in Vegas is no big thing at all.

Harry, the ginger-haired "spare" to his brother's heir, has had the eyes of the world upon him since the day of his birth. He will almost assuredly never be the king of England. Instead he will no doubt forever be resigned to a life of service to his country, including at some point marrying some nice suitable young lady and making little princes and princesses. His official royal duties include sitting and applauding at the Olympics. In a lot of ways, that sounds like the worst. But unofficially, he gets to be our sensational entertainment. He's got the word "Prince" in front of his name, decent abs, and access to a palace. He also has Ryan "One Night Stand"  Lochte for a wingman. As far as I can tell, any minute of his life that he is wearing pants instead of cavorting around naked with strange women is a feat of supreme willpower.