It's not just GOP Senate candidate Todd Akin. It's practically a party tradition 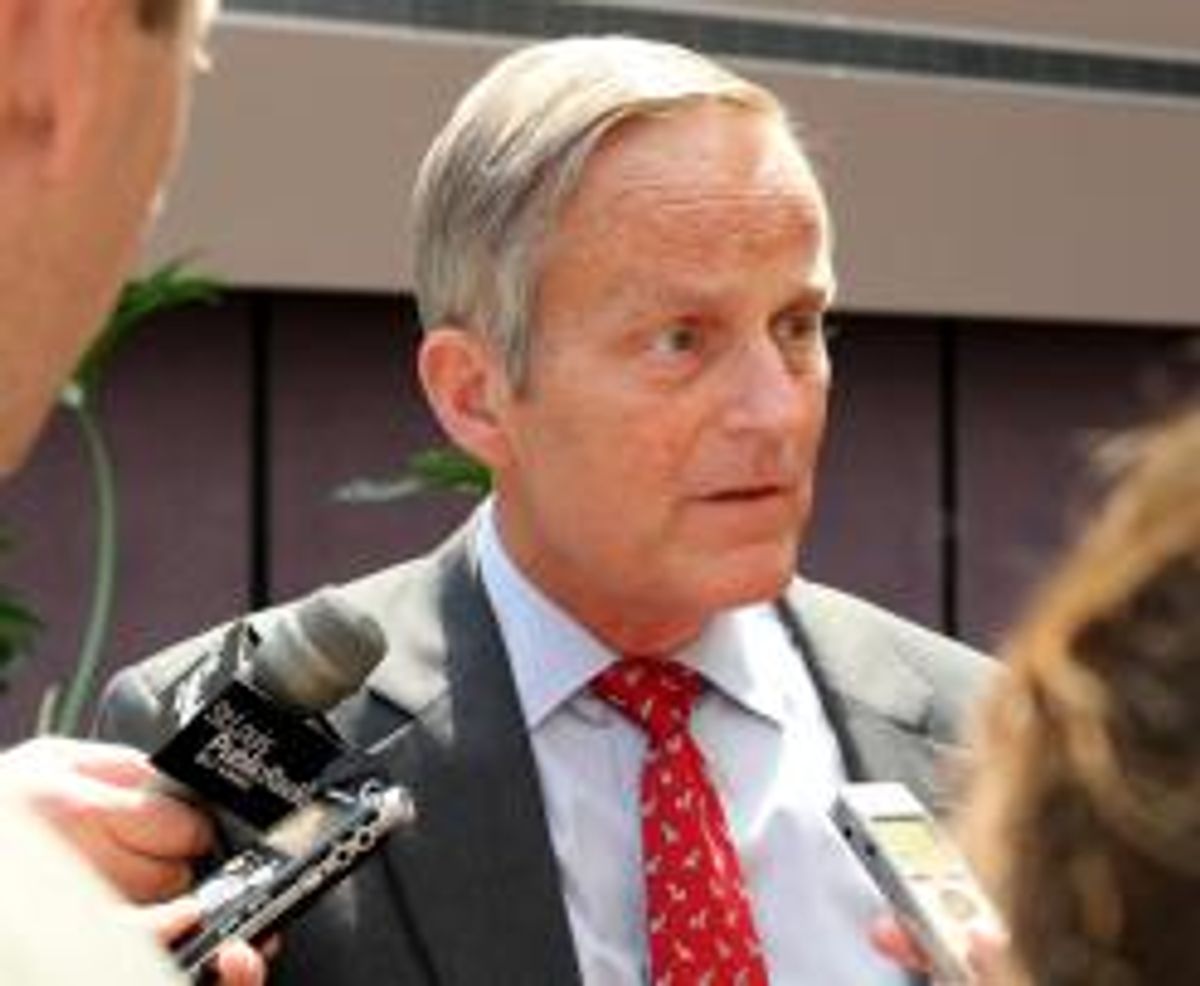 By now you’ve likely heard -- and perhaps felt your jaw drop over -- Todd Akin’s interview, in which the Republican Senate candidate from Missouri admitted that he believes abortion should be illegal even in cases of rape, because “if it’s a legitimate rape, the female body has ways to try to shut that whole thing down.” If you follow that logic to its end, Akin means: Ladies, if you say you got pregnant after being raped, you’re probably lying about being raped.

Of course, the scientific facts are far from being on Akin’s side, which should be embarrassing for a member of the House Committee on Science, Space, and Technology. While it may be true that female ducks have evolved in such a way that they now have a biological anti-pregnancy response to forced sex, human beings most definitely have not. As the Washington Post’s Sarah Kliff notes, many scientific studies have proven that the you-only-conceive-if-aroused theory is complete bunk. In fact, one study from 2003 even showed that rape victims may be more likely to get pregnant than individuals on the whole.

Akin’s assertion doesn’t make sense in other ways, either. For instance, there’s no sensible reason for the vast majority of mentally stable women to ever “cry rape.” As Amanda Marcotte notes at the American Prospect, “Why would a woman trying to put a one-night stand behind her invite grilling by detectives and defense attorneys? Why would someone so concerned about maintaining the illusion of purity subject her sex life to examination by a crowd of jurors?”

Akin responded to the firestorm over his comments by claiming he “misspoke,” while plenty of members of the media have characterized the incident as a gaffe. But harmless gaffe it is not. As heartening as it is to see pressure for Akin to withdraw his Senate bid, there is a real concern that the situation will be forgotten when the news cycle eventually moves on. Because the reality is that this story is not merely about one inept Republican putting his foot in his mouth. Rather, Akin’s statement fits into the framework of the ongoing Republican assault on reproductive rights, and more broadly, our society’s pernicious rape culture (which is perpetuated not just by Republicans, but some self-identified progressives as well). Akin doesn’t stand alone.

The mistaken notion that one’s body can somehow elude pregnancy when not aroused dates back centuries and is still a popular myth -- though one rarely shared in public -- among some anti-choicers today.

Within hours of Akin’s remark, journalists were producing detailed accounts of similarly absurd comments on abortion, rape and birth control from GOP officials and pundits, all of which showed a complete callousness toward science and women’s autonomy. To put Akin-gate in context, here are eight of the worst that we at AlterNet could find, past and present, but the full gamut of this sort of talk goes far, far beyond the following short list.

1. Other absurd Republican contributions to the “rape doesn’t lead to babies” myth. As Anna North reported earlier this year, other Republicans paved the way for Akin’s recent statements. In 1995, Republican Henry Aldridge stated that when a woman is raped, “the juices don’t flow,” and in 1988 another Republican congressman stated that women emit “a certain secretion” that stops pregnancy when they are raped. (Which has led many of us to wonder, which is it, guys? Do these mythical juices flow, or do they stop flowing, when a woman is raped?)

2. The daddy of all these rape theories. The National Right to Life Committee’s John C. Willke’s claims in an article that the “trauma” of rape prevents pregnancy -- i.e., he “basically just makes shit up,” writes Katie J. M. Baker at Jezebel.

3. GOP donor asks, "Want contraception? Put an aspirin between your knees." This line, now a total cultural punch line, came from Foster Friess, who was a big donor to Rick Santorum before moving on to support Romney. The video clip featuring Friess’ comments and Andrea Mitchell’s flummoxed response went viral this spring.

Friess: This contraceptive thing, my gosh it's such inexpensive, back in my days we used Bayer aspirin for contraception, the gals put it between their knees and it wasn't that costly.

Mitchell: Um, excuse me, I'm trying to catch my breath from that Mr. Friess, frankly..

4. GOP lawmakers seek to legally redefine rape as “forcible rape” so fewer women will qualify as victims. Remember the media firestorm around the “war on women”? One of its major fronts consisted of congressional shenanigans around the definition of rape in the noxious H.R. 3 “No Taxpayer Funding for Abortion” bill. These efforts included Akin and V.P. candidate Paul Ryan and were aimed at siphoning off the number of abortion-funding exemptions so that only the rarest few qualified. What offended women most -- and eventually scuttled the bill -- was the idea that the government could weigh whether your rape “counted” or not.

Garance Franke-Ruta explains: According to the bill, there would be exemptions only for something called "forcible rape." (Presumably, this is the same thing Willke called "assault rape" and Akin called "legitimate rape," as opposed to what Willke called "consensual" "statutory" rape.) After a public outcry, Smith retreated from his first draft of the bill and reinstituted the Hyde language, though an additional provision was added later to clarify that the bill will "not allow the Federal Government to subsidize abortions in cases of statutory rape." Akin and Republican vice presidential nominee Paul Ryan were co-sponsors of the bill, along with 225 others.

Since Sunday, the Romney camp has been trying furiously to distance itself from Akin, but these two names together as co-sponsors of this bill may come back to haunt Paul Ryan.

5. Another GOP lawmaker (surprise, surprise) worries that women will claim rape just to get abortions. This March, Idaho Sen. Chuck Winder, who had already proposed that women go through two forced ultrasounds, including one at a right-wing “crisis pregnancy center,” went a step further by voicing his concern that women might use the “rape issue” to go abortion-crazy. Quoth Chuck: “Rape and incest was used as a reason to oppose this. I would hope that when a woman goes into a physician with a rape issue, that physician will indeed ask her about perhaps her marriage, was this pregnancy caused by normal relations in a marriage or was it truly caused by a rape.”

6. Pundits and lawmakers: Forced ultrasounds are OK because women already consented to be penetrated when they got pregnant. Remember the bill in Virginia that would have mandated certain kinds of invasive ultrasounds for women seeking abortions (the kind that already exist in other states)? Well, ultraconservative pundit Dana Loesch, who has already come to Todd Akin’s defense in this round, was hostile to the basic concept that every time a person's body is penetrated, it’s mandatory to ask for consent. "They had no problem having similar to a transvaginal procedure when they engaged in the act that resulted in their pregnancy," she said. Sadly, Loesch’s idea was not so far out of the norm: Several Virginia lawmakers basically said the same thing.

7. When women sign up for the military to hang out with aggressive dudes, they are asking to be raped. Notoriously anti-woman Fox News talking-head Liz Trotta wondered of enlisted women who were assaulted, “What did they expect?” She also blasted feminist calls for infrastructure and support to help the increasing number of women in this position. And refused to apologize.

8. Santorum and Huckabee are all about rape victims taking one for team "Life." Let's not forget our Rick Santorum and Mike Huckabee, respectively, think rape victims should "make the best" of it and see the unwanted child as a gift and sometimes cool people are conceived in rape.

Some rape victims unsurprisingly see this idea as torture.

OK, so these are all pretty heinous things to say. But let’s take a deep breath and remember that rape culture doesn’t just live on the extreme right wing. From left-wing pundits who are convinced that the rape charges against Julian Assange must be trumped up, or that sex with a sleeping woman doesn’t constitute rape, to the mainstream pop culture writers who have long sought to minimize or dismiss acquaintance rape as “grey rape” or not real rape, to local and national law enforcement that don't know how to handle victims properly, there’s a long continuum of thought that creates rape culture. Rape culture posits sex as a transaction with women’s sexuality as a passive object either given or taken, rather than a consensual exchange. Most important, rape culture puts the onus on victims to prevent rape rather than on potential perpetrators not to do it. Rape culture produces comments like Todd Akin's, and then seeks to sweep them under the rug once the news cycle is over.