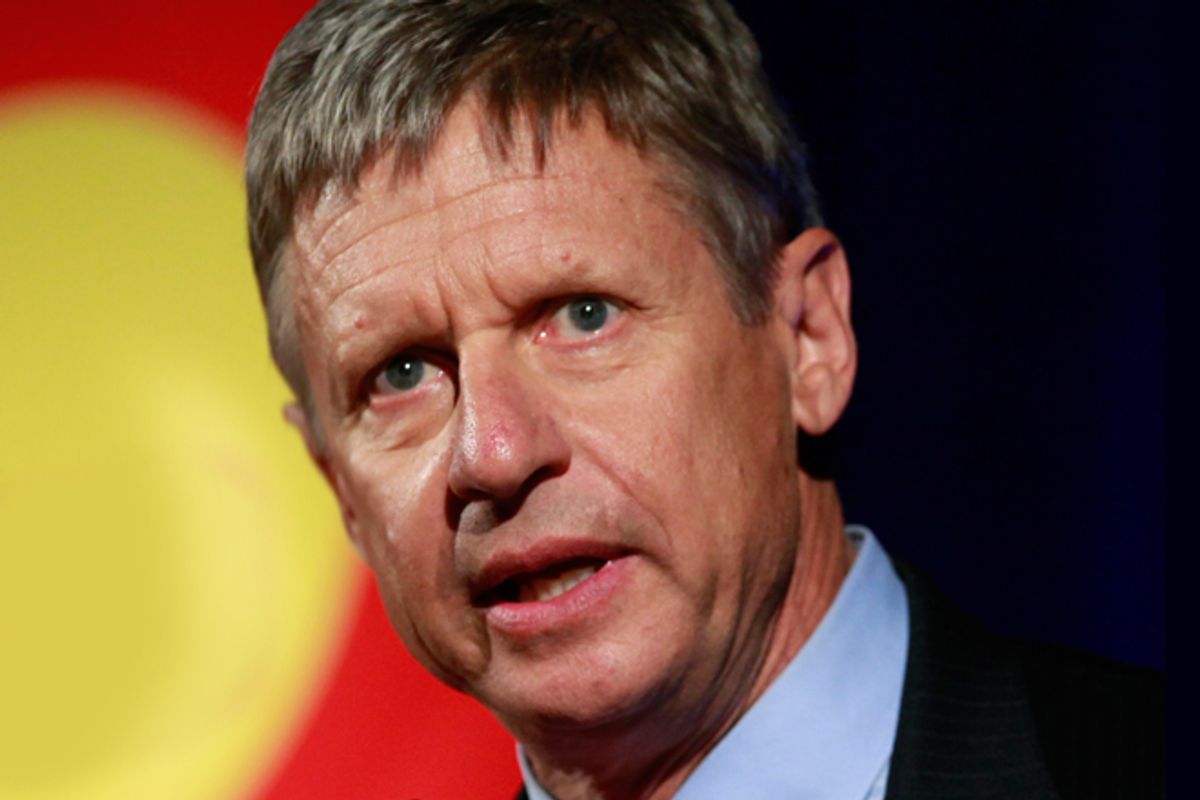 The Libertarian movement has been working for years to infiltrate the GOP and basically what they have accomplished is getting a bunch of Republicans to pay lip service to certain tenets of Austrian Economics. Unfortunately this makes it easy to think that your average Professional Libertarian is dedicated less to "liberty" than to "keeping top marginal tax rates low for billionaires." Related: Cato Institute executive vice president David Boaz, one of the movement's most influential figures, loves Paul Ryan.

Meanwhile, Gary Johnson is still running for president (on the Libertarian Party line), and he is still saying things that make me admire him even though I am a big-government socialist. Here he is on Paul Ryan:

Johnson, the Libertarian Party nominee for president, noted that Ryan was a strict social conservative who voted to restrict abortion rights and against marriage equality.

“Paul Ryan submitted personhood legislation that is anything but libertarian,” he said. Johnson's eyes widened and his volume increased as he went into detail about Ryan’s support for a national version of Virginia’s controversial transvaginal ultrasound law.

Gary Johnson was the Republican candidate who might have broken out during the primaries if the movement that surrounds Ron Paul -- a born-again antiabortion isolationist with a history of making racist political appeals -- were actually about libertarian principles instead of being a weird cult of personality. (Johnson also might have benefited if the liberal media hadn't decided Jon Huntsman was the official Republican Liberals Should Like solely because of his bold decision to repeatedly call his party's base a bunch of morons.) (And if those Principled Libertarian Koch brothers had wanted to throw a bunch of money at him it probably wouldn't have hurt, right?) Alas, it was not to be.

"Rep. Akin's comments were not just offensive, but also absurd on their face, and serve to remind us why politicians and the government ought not be asserting themselves onto decisions and judgments about a woman's right to choose."

It's almost as if this crazy guy actually means it when he says he doesn't want the government interfering in private affairs, and he isn't just talking about the God-given right to profit as much as possible from pumping as much carbon as possible into the atmosphere.