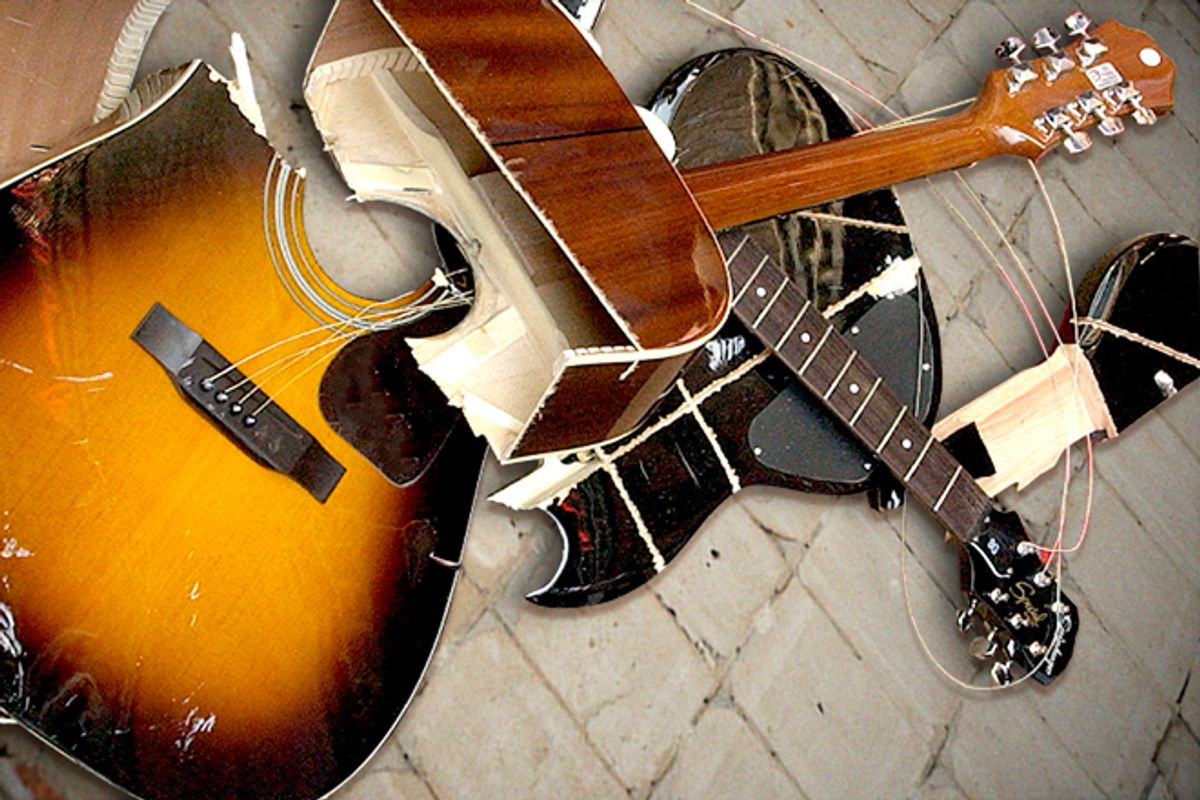 Can music be successfully used as a political weapon? Last week offered evidence both for and against. On Friday, three members of Pussy Riot, an offshoot of a longtime group of activists, were sentenced to two years in prison for their performance in Moscow's Cathedral of Christ the Savior. They've became a focus of international outrage at the Russian government, prompting protests from citizens, musicians and governments alike. On Thursday, meanwhile, Tom Morello published a scathing piece excoriating Republican vice-presidential candidate Paul Ryan for describing himself as a fan of Morello's band Rage Against the Machine. "Perhaps Paul Ryan was moshing when he should have been listening," Morello wrote.

But Pussy Riot's success in ginning up outrage shows how little the words really matter when music involves itself in politics. Few followers of the story could tell you the lyrics of "Punk Prayer," the song that got Pussy Riot arrested. Instead, we're talking about the protesters' name, their T-shirts and the stirring closing statement Nadezhda Tolokonnikova made in court. The politically important stuff about music isn't the "content" of the lyrics; it's the symbolic gestures made by the people performing them. In fact, the lyrics matter so little that Paul Ryan can enjoy songs about American foreign policy that are diametrically opposed to his belief in American exceptionalism. Rage's symbolic gestures are broad enough to apply across the political spectrum, and send a very different effective message than their lyrics do. Rather than dismissing Ryan's embrace of an ostensibly lefty band as an invalid response, we should think what lessons we could learn about how music really makes its political points -- lessons Pussy Riot have successfully applied in their present action.

Because of the '60s, part and parcel of being a "serious music fan" is lamenting that music isn't political enough. Thus, every few months we get a fresh article wondering what happened to protest songs, even though there are tons of Western protest songs and actually dangerous political music abroad (not to mention that the No. 1 selling album of 1967 was the Monkees' "More of the Monkees"). There's a strong desire for earnest, ascetic bands who pursue political causes while achieving mainstream visibility; it feeds listeners' fantasies of music as a revolutionary tool, even though its actual pleasures are far more complex than that. "Protest songs become entertainment for the rich," as Leon Wieseltier put it in a recent takedown of Bruce Springsteen, an ascetic righteous crusader par excellence.

Rage, a good but deeply problematic band, tapped into this desire when they emerged in the mid-'90s -- their lead singer rapped and had dreadlocks! They were loud and disliked the powers that be! They were called Rage Against the Machine! -- but rode it to far more musical than political success, and the model for properly political music shifted to acts like Fugazi, Sleater-Kinney and Public Enemy, all of whom made statements both with their process and their product. Consequently, the desire for this retro sort of protest music remained unsated. In the Guardian, British critic John Harris expressed his jealousy of musicians living under oppressive regimes: "in some places, culture actually still matters."

Without perhaps meaning to, he speaks the truth. Complaints about the lack of protest songs ultimately aren't about the songs at all. They're laments that political movements have failed to coalesce around music. And providing that fantasy is what Pussy Riot is so good at. Though, as Sarah Kendzior points out, the media has relentlessly framed the group as a "girl band," they're longtime activists associated with a street-art collective known as Voina, and have a lengthy record of transgressive protests like throwing an orgy in a museum. Their interests have always been more in protest than art. But they have skillfully wielded the Western-friendly symbols of a protest band to attract attention and support from outside Russia -- a fairly important thing, given their apparent unpopularity domestically.

Nitsuh Abebe laid out just how closely the group's aesthetics conform to the expectations of sympathetic Americans and Brits for a feminist punk band, especially given that they were arrested for protesting inside a church. There are lots of legitimate arguments for why the West's support for the band might be a bad thing, but from a P.R. standpoint, Pussy Riot's performance of a revolutionary band was a wild success -- and P.R. is really what people care about when it comes to protest songs. The desire is not for the bare existence of political music, but for it to take up dearly held causes and display them widely, to a mainstream audience, while attracting governmental resistance.

All of which points to why Morello is so wrong to concentrate solely on the explicit message of a group's music when assessing their proper political interpretation. We know that protest movements build membership not only through the righteousness of their cause but the personal relationships the members have with one another; in Doug McAdams' classic account of Freedom Summer members, those who took part in actions had closer ties to other members than those who stayed home. We also know that by finding other people who like the music we like, we end up in friendship groups strong enough to incorporate a whole lot of other activities besides music -- activities like, say, politics.

In other words, the association of music with politics isn't inherent to music but inherent to social groups. Protest happens through music not because of its artistic power, but because the people involved all like both protest music and protesting. Affinity leads to action. Moreover, "protest music" doesn't mean music that gets us to protest, but music that is frequently heard at protests. That association of certain kinds of songs with political actions means those kinds of songs can then be heard, in the future, as political actions in and of themselves. If you get up in a church and sing a song, it's a lot easier to parse as political speech because of all the other times people have stood up and sung a song to protest something. Crucially, though, the association is not with the message of that protest but the act itself.

And that's why Paul Ryan gets something out of Rage Against the Machine even though they're not on his side. Rage successfully channeled not radical leftism but resistance in general. While the members have gone on to involve themselves directly in social protest, championing radical causes -- most notably, Morello is heavily involved with the Occupy movement -- the vast majority of their fans are, like Ryan, more interested in their general rejection of authority than these particular issues. "FUCK YOU I WON'T DO WHAT YOU TELL ME" applies more readily to your parents or big government; the "I" there makes it much harder to port the sentiment over to those drone-killed Pakistani civilians who are truly oppressed, but far removed from our immediate experience. Morello mentions prisoner Leonard Peltier in his piece, but if even a small portion of the 3 million people who bought Rage's first album showed up to these protests, Peltier might indeed be free.

Rage's deployment of symbols of generalized rebellion against authority, which gave them such wide success in the '90s, was ultimately out of date. By calling back to '60s notions of protest, they aligned themselves with a sense of resentment common to both the contemporary left and the right; Paul Ryan did not accidentally get something out of the band that wasn't legitimately there. Pussy Riot read the culture more astutely. By looking like a riot grrrl band, they communicated not only the desire to protest but what the protest was about. Their lyrics had almost nothing to do with it, because they didn't have to.

And that's the secret of political music. We'd like to think that through rigorous scholarship and skilled wordsmithery, you could craft such a damning indictment of the current order that it would dissolve in disgrace upon the song's performance. ("If the world is so wrong, then you can break it all with one song," as another riot grrrl once put it.) But that's not the way it really works. One critic got it right when he said that Pussy Riot shows "the punk rock spirit ... can be a force that incites fear." Indeed, the spirit can, but the actual music still mostly incites pogoing. Art makes its points through style, not scholarship, and it's ridiculous to expect it to do anything else. Pussy Riot knows that better than anyone.