Magazines: Hey, look at us!

As magazines struggle, they're resorting to sensationalism on their covers -- and the Web loves to take the bait 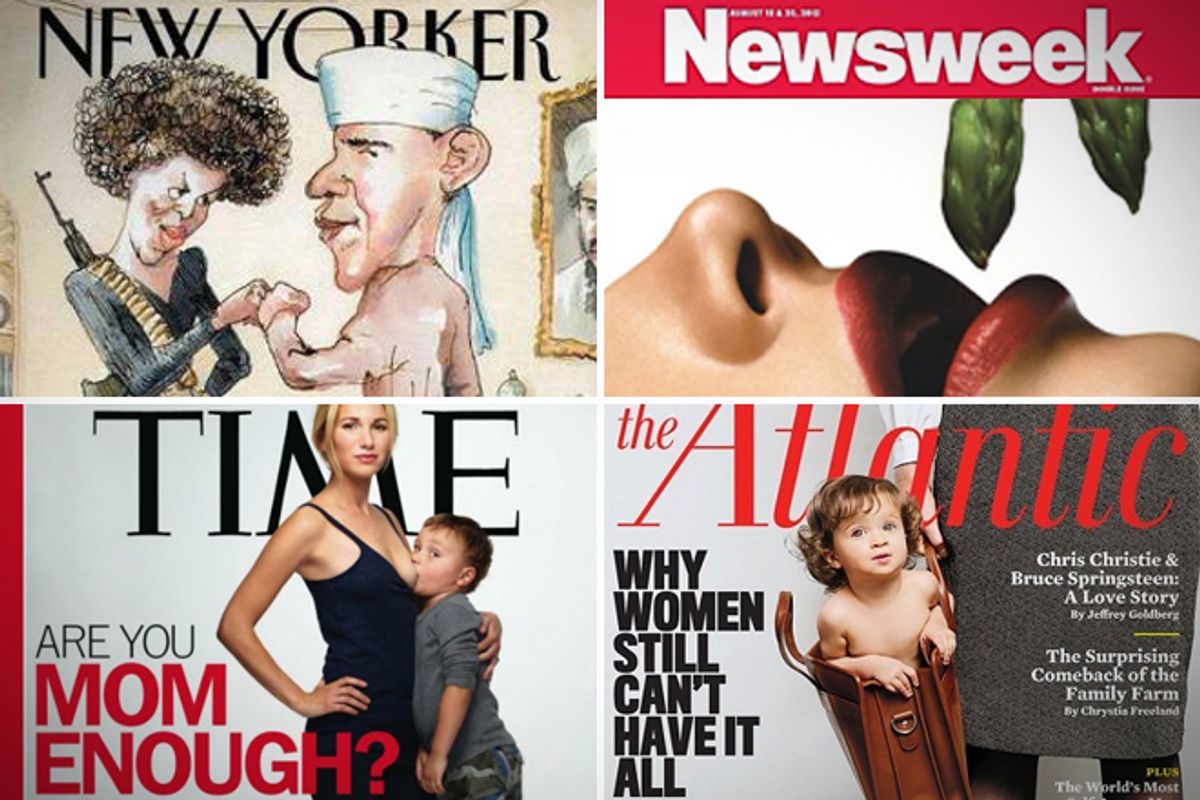 It has been a hell of a year for controversial magazine covers. Tina Brown's relaunched Newsweek has given us the single-entendre shot of a pair of asparagus poised mere inches from the widened lips of a eyeless female face (used to illustrate a listicle about restaurants); its "50 Shades of Gray" piece promoted on the cover by a nude woman blindfolded with what appears to be one of those bows they put on Audis at Christmas; and, of course, there's the rainbow-colored Obama that announced the story on the president's shifting stance on gay marriage. But it's hardly the only offender. Time had its infamous breast-feeding 3-year-old cover, and the Atlantic put a baby in a briefcase. This is part and parcel of an increased interest in magazine covers. The New Yorker, which has had its own cover controversies, launched a site (and book) called Blown Covers, showcasing some of the cover art it decided not to run.

This increased interest is inextricably linked to the boom in controversial covers. The Internet, once a text-only concern limited to a small group of users, is now where 41 percent of Americans get their news, and the right picture can generate an enormous amount of traffic. Just as headlines that ask a question can drive users to click through just to find out the answer, so can pictures that seem inexplicable -- "WTF" in the language of the Web -- encourage similar behavior. There have always been provocative magazine covers, of course, but what we're seeing now has a different aim. Once, a respected publication might aim for goosing sales while still maintaining its reputation (by, say, running a bunch of covers about Jesus). But on the Web, where media outlets no longer control their own space and a personal blog appears with equal weight beside an international publication on Twitter and Facebook, controversy is a much more successful strategy to get people onto a particular page. When clicks are all that matter -- and when the Internet is happy to rip the last scraps of controversy from whatever bait magazines throw their way -- how can publications resist such easy sensationalism?

The "controversial cover" trick has been around for a while, and found perhaps its fullest expression in the hands of Esquire's George Lois in the '60s. The most prominent practitioner of the form in the '90s was the aforementioned Tina Brown, who used the celebrity shot to push boundaries of taste, as when she put a pregnant and nude Demi Moore on the cover of Vanity Fair. In the period between Britney Spears' appearance on a 1999 Rolling Stone cover and the 2008 New Yorker fist-bump, though, the form fell out of fashion. As print media teetered on the verge of extinction while simultaneously failing to embrace the Web, they played it safe.

No more. But why? Controversial covers worked in the print era because they increased newsstand sales, but there was a limit: They still needed to represent the brand in such a way that readers might want to engage with, and respect, the other content inside. They had to sell a complete package, not just one article. On the Web, though, full issues are far less important than individual pieces of content. The fact that the content is coming from a respected publication like Time matters far less, on Twitter and Facebook, than what the link promises. According to a recent story by Adrienne LaFrance, most publications now see readers coming for specific articles rather than the site or publication as a whole. That means it's far more important to get that one click than to create an attractive frame for the product such that readers might want to commit and read regularly. Instead, as Atlantic editor Bob Cohn wrote, the work now is "designing article pages to drive the next click: related content headlines, video boxes, most popular modules, most shared modules."

Since the goal is less to get readers to buy a package than navigate to a single page, it's not surprising that Web-specific promotional techniques are cropping up more and more in traditional media. Salon's Alex Pareene described Newsweek as "trolling America weekly," and though he's talking there about Niall Ferguson's recent Obama story, he's got those covers in mind, too. (We haven't even mentioned last year's "What Would Princess Di Be Like Now?" debacle.) But all this really shows is how the Web has flattened, or at the very least reshaped, traditional media authority. When you can't depend on your organization's reputation coloring readers' interpretations of your work, how do you hook them in? The answer for some outlets has been to sink to a level just barely above spambots. But others are exploring new forms of prestige. The Atlantic's current cover, featuring Romney and Obama boxing, is a lovely thing, and comes packed with its own Web-friendly making-of featurette. So it's possible to resist the impulse to drive easy traffic.

As the ever-increasing pace of such link bait shows, however, it's not particularly likely. Covers are one of the distinct marketing advantages print media has on the Web. Drudge Report aside, what a particular site has on its front page isn't newsworthy, but a weekly magazine's cover very much is; indeed, after printing its controversial covers, Newsweek can then report on the reporting about the controversy, creating more content and more visibility. The cover is a form that works uniquely well on the Web. It's a highly visible, quickly digestible summation of some larger idea, popping out as users scroll through their feed. Plus, unlike even the most carefully crafted headlines, a cover displays the brand of its source prominently, making readers at least somewhat more likely to visit the source later. A cover that goes viral does more for a publication than any individual story could. As the Atlantic's Cohn says, though, sustained growth only comes through more and better-targeted content. Controversial covers undeniably bring a temporary bump, though. And that will keep them coming for the foreseeable future.