The Joe Paterno biography, which makes apologies for its subject, is a minor literary crime 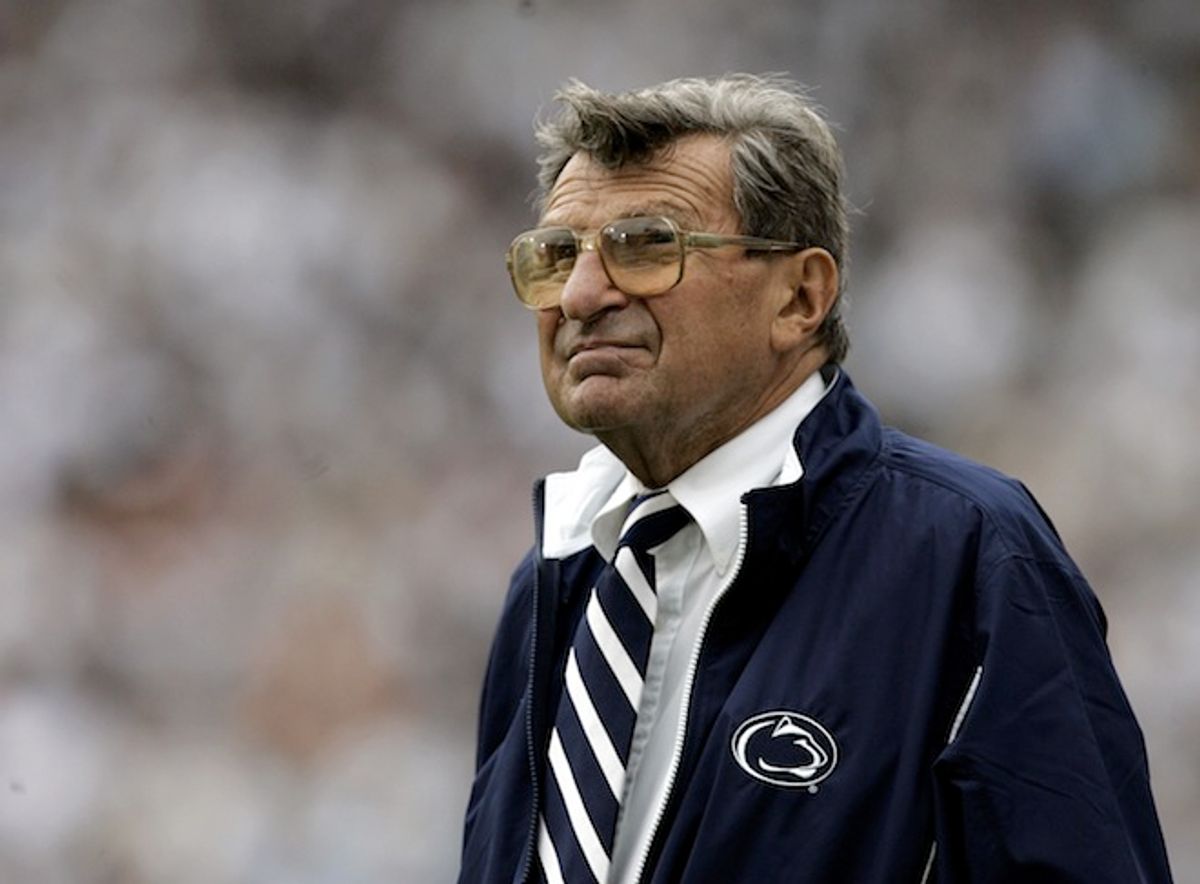 George Orwell’s review of Salvador Dail’s autobiography includes the observation that, “if it were possible for a book to give off a physical stink from its pages, this one would.” I was reminded of that judgment while reading Joe Posnanski’s new biography of Joe Paterno. “Paterno” is a disgraceful book and a minor literary crime.

Posnanski, a sportswriter who has authored many justly admired pieces, particularly about baseball, was handed what turned into a once in a lifetime opportunity last year, when he was invited by Joe Paterno to spend the fall in State College, Penn., so that the author could have daily access to the subject of his biography. (Posnanski gives no sign of understanding that Paterno did him this service so that the subject would also have daily access to the biographer.)

This became an extraordinary journalistic and literary opportunity in the first week of November, when the Jerry Sandusky scandal became public knowledge. To say that Posnanski botches that opportunity is akin to saying that the Titanic’s maiden voyage might have gone more smoothly.

Freeh’s exhaustive investigation into the matter, conducted at Penn State's behest, presents compelling evidence that all these people “repeatedly concealed critical facts relating to Sandusky’s child abuse," because they chose to protect their careers and reputations rather than doing anything to stop a child rapist.

Instead of confronting the horrifying truth about his subject matter, Posnanski attempts an amazingly clumsy whitewash of the facts. The key fact that destroys any attempt to minimize Paterno’s, Curley’s, Schultz’s and Spanier’s abominable behavior is that all these men were aware -- according to the Freeh report -- in May of 1998 that a criminal investigation was being conducted into an allegation that Sandusky had sexually assaulted a boy after coercing the boy into showering with Sandusky. At that time Sandusky was Paterno’s most important assistant coach and heir apparent.

This fact is crucial because it explains why, less than three years later, these four men allegedly decided to cover up Sandusky’s rape of a 10-year-old boy in the Penn State football facility showers. All of them must have known that if they reported this crime, their knowledge of the previous allegation would come to light -- and that they might well lose their jobs as a result. So it would seem they decided to protect their careers rather than any of the children whom Sandusky subsequently raped.

In January 2011, Paterno perjured himself while testifying to a grand jury regarding these matters, claiming that he had never heard anything about the 1998 investigation. He repeated this lie to Posnanski, who dutifully reprints it, while trying to argue against overwhelming circumstantial and documentary evidence that there’s real ambiguity about what Paterno “was told” about the 1998 investigation.

It’s difficult to describe adequately just how preposterous this is. In 1998 and 2001 (and in 2005, when Spanier told Paterno to retire and Paterno told his putative boss to get bent), Joe Paterno was the most powerful person on the PSU campus, and by a wide margin. Even before the Freeh investigation dug up the deleted inter-office emails that documented the conversations of Paterno and the other three men regarding Sandusky’s ongoing history of sexual assault, it was beyond implausible that a month-long criminal investigation of Paterno’s right-hand man could have taken place in the tiny gossip-ridden town of State College without Paterno’s knowledge. It was even more implausible that Curley, Schultz and Spanier didn’t inform Paterno of this fact.

The emails merely confirmed what everybody already knew. Posnanski attempts to turn Paterno’s participation in an apparent conspiracy to cover up serial child rape into a morally ambiguous matter by making three claims. First, as noted, he argues that it’s unclear what Paterno knew about the 1998 investigation. His evidence for this is that there’s no mention of the investigation in the private handwritten notes Paterno wrote to himself in 1998 and 1999, regarding Sandusky’s unexpected “retirement” announcement in the latter year. Posnanski acknowledges that the “files could have been censored,” but then rather weirdly adds “there are so many private notes in the files it seems unlikely.”

In this regard, Posnanski completely misses the significance of this information regarding Paterno’s youngest son Scott, who more or less appointed himself as his father’s personal lawyer when Paterno was preparing to testify to the grand jury:

Scott recalls interrogating his father about Sandusky, asking question after question about what he had known and what he had done. He also went through Joe’s files, folder by folder, in an effort to find anything he could about Sandusky. (Emphasis added).

Given that these files consisted, “in pertinent part” as lawyers say, of private handwritten notes Joe Paterno had written to himself, and that the only evidence of any note’s existence was the single copy of the note itself, a fairly obvious question will leap to minds more inquisitive than Joe Posnanski’s.

Moving right along, Posnanski also deploys the “naive old man from a simpler, more innocent time” defense, most egregiously in this passage citing an exchange between Paterno and a longtime friend and adviser:

D’Elia described watching Paterno read the [grand jury] presentment. ‘It was like watching his innocence get blown away. What did he know about perverted things like that? When he asked Scott, ‘What is sodomy, anyway?’ I thought my heart is going to break.’

The technical legal term for this is “bullshit.” As Posnanski documents at length, Paterno was no stereotypical meathead football coach: He was a very well-read, even erudite man, who was also keenly interested in politics and public affairs. In addition he was a lifelong Catholic, who in the previous decade would have had many occasions to ponder the precise details of what the coverup by an institution’s authorities of the sexual abuse of children entails. That he didn’t know what the word “sodomy” meant is exactly as plausible as the idea that he didn’t lie under oath about when he first heard about Jerry Sandusky’s “problem.”

The most outrageous defense of Paterno, repeated over and over again throughout this disgusting and disgraceful book, is this one:

If Jerry Sandusky was guilty, then hundreds of people had been fooled: child care professionals, law enforcement officials, co-workers at his charity, parents, judges, close friends of Sandusky and many others. Those closest to Paterno believed that when he went public with what he knew and what he did, most people would understand he was fooled like everyone else. Joe Paterno believed the same thing.

Incredibly, it’s clear that Posnanski himself continues to buy this line: Joe was fooled by Sandusky, along with everyone else. Except that he wasn’t. Joe Paterno was fooled by Jerry Sandusky in the same sense that Richard Nixon was fooled by the Watergate burglars.

Paterno won a lot of football games while running an (arguably) cleaner than average program. He also spent the last decade of his life covering up and enabling an ongoing series of child rapes. Joe Posnanski wants us to balance these things, and to conclude that Paterno was a fundamentally admirable man, who made one big mistake.

As they say in sports, you make the call.