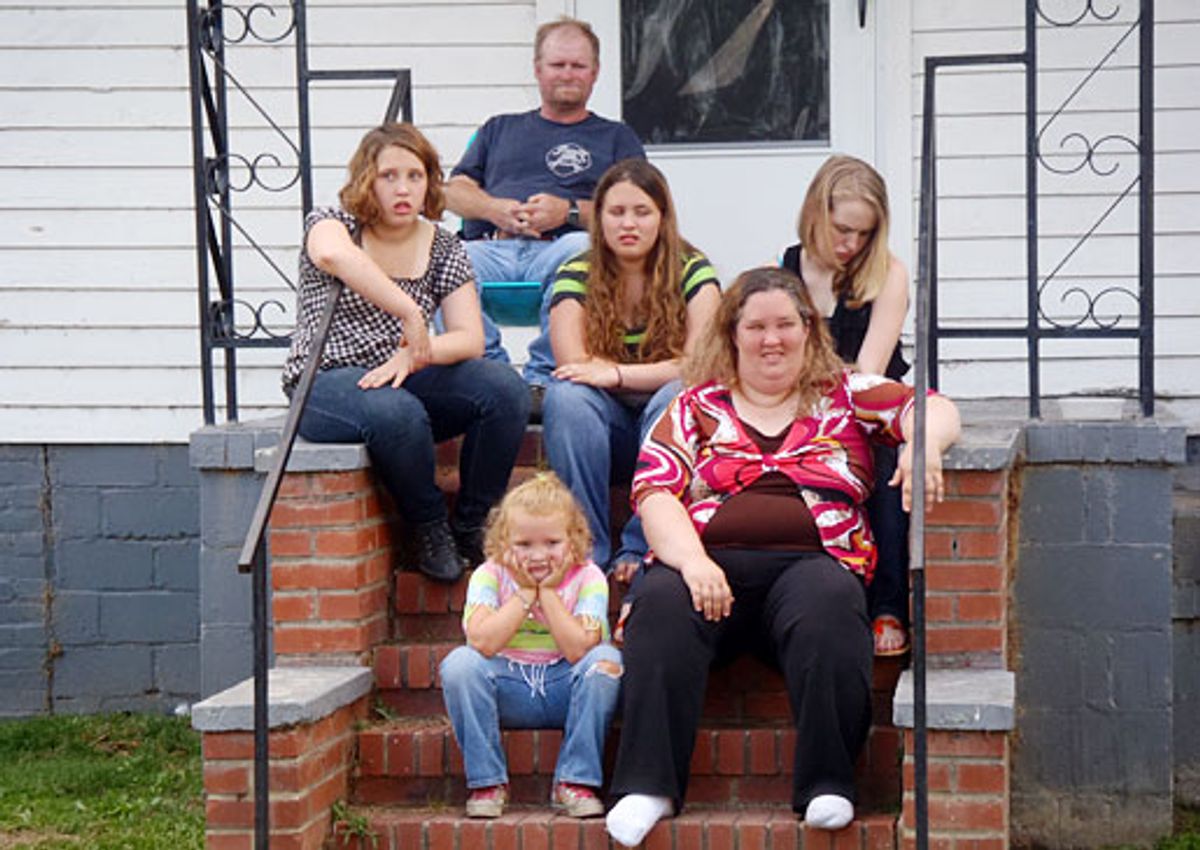 “Here Comes Honey Boo Boo,” TLC’s new show about an energetic, self-identified redneck family that, to a member, follows the law of honey badger — they don’t give a shit — has become the latest must-see reality TV show since its premiere two weeks ago. The show, which stars Honey Boo Boo, the nom de reality TV of the 6-year-old energy-ball Alana Thompson, who first came to America’s attention when she appeared in the horrifying pageant series “Toddlers & Tiaras, is averaging about 2 million viewers an episode and a whole lot more buzz. But winning the reality TV fame roulette is, as ever, to have won a sharply double-edged fame, and in the case of “Here Comes Honey Boo Boo” that edge has come down squarely on the hefty neck of Alana's mama, June.

This past weekend, the L.A. Times ran a piece on the “virtual stoning” of June, the 300-pound force of nature who, more than Alana, is the star of the show, one of those innately intelligent, verbally dexterous, blithely unconcerned, totally individual individuals that make for riveting television. The writer of the piece, Ada Calhoun, pointed out Anderson Cooper’s recent attempts to shame June about pageants, getting her to dress up in a frilly dress, as well as Dr. Drew’s outrage about go-go juice, that noxious mixture of Red Bull and Mountain Dew that June infamously fed Alana on an episode of “Toddlers & Tiaras.” (Where Dr. Drew, who has done more than anyone to exploit others for his own reality TV fame, gets off feigning “outrage,” I have no idea.)

Go-go juice and pageants, with all their creepy JonBenet Ramsey overtones, have been enough to stack public opinion against June, but “Here Comes Honey Boo Boo” works as a piece of lighthearted entertainment explicitly because it is not at all a show about bad parenting. As Calhoun puts it, “The kids have what they need. They seem secure and happy. What exactly is the problem here?”

There is, for sure, a baseline parenting disaster happening on “Here Comes Honey Boo Boo,” and it’s that of letting a 6-year-old star in a reality TV show at all, exposing her to the world in such a way and at such an age. But there are many, many parents who push their children toward fame — stage parents, pageant parents — and many other parents who allow their children to appear on reality TV shows who are not coming in for quite the abuse that June is.

“Honey Boo Boo” is about a lot of things, but insofar as it has become a referendum on parenting, it’s really a referendum on class, and how the parenting habits and values of the affluent — especially when it comes to food — are "better" than those of some self-proclaimed rednecks from Georgia. (Take a look at this piece from the Daily Mail, in which buying chocolate milk powder, eating doughnuts, playing in the mud, and eating fresh roadkill are described as if they are child abuse.) June’s most serious crimes involve feeding her children cheese puffs and caffeinated, sugary beverages, and — though this doesn’t get said quite so blatantly — of being obese. (And none of these maternal crimes have stopped Alana from coveting an iPhone, which she asked Santa for in last night's episode, like a good little acquisitive American. One nation under Apple.)

June looks a mess, and TLC constantly shows her farting and batting away flies, but appearances are in this case not just deceiving, they're preying on stereotypes. Whatever she looks like, June spends an inordinate amount of time with her children, trying hard to keep them entertained and engaged. She encourages her daughters to lose weight, takes care with the household budget, insists the girls clean up the messes they make, forces them to wear helmets while they drive four wheelers through the mud, rarely loses her temper, kisses and hugs them, and regularly sets limits on their behavior. If June were rich, Alana would be registered in tap or drama class. She’s not, so she does pageants and reality TV.