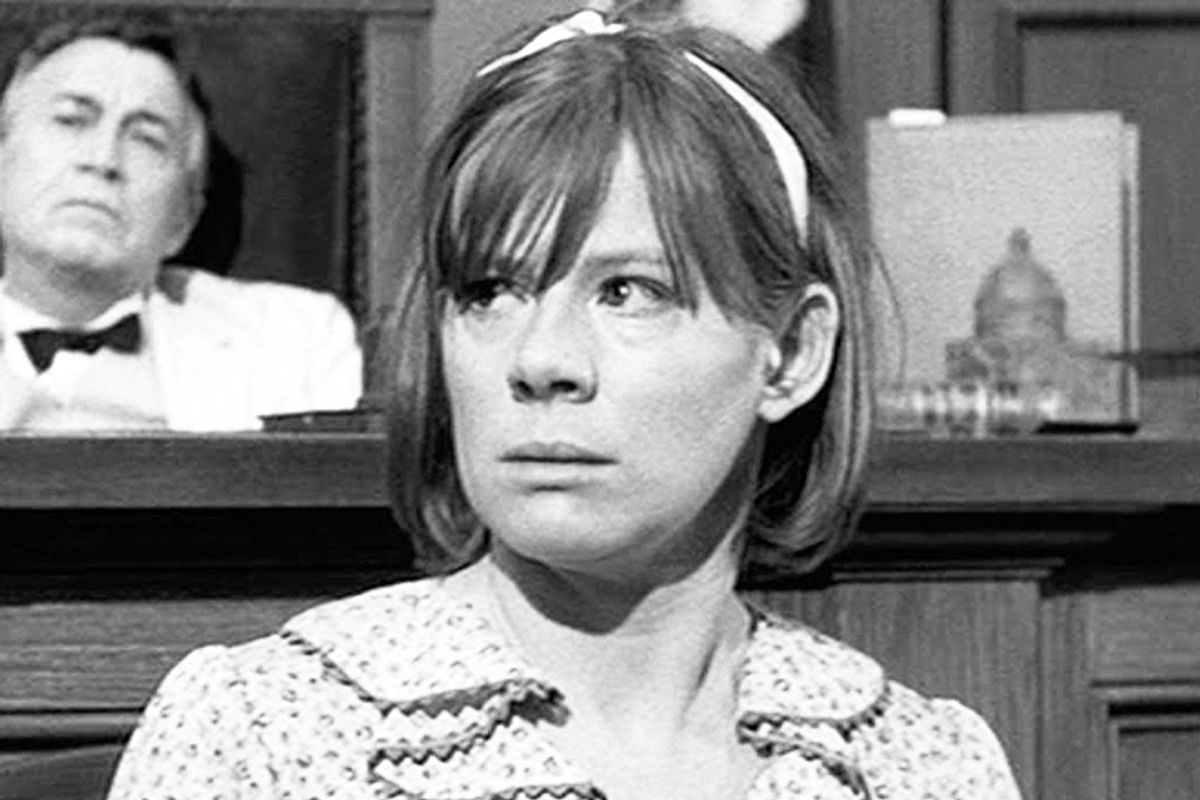 Collin Wilcox as Mayella Ewell in "To Kill a Mockingbird"
--

When Todd Akin opened up his maw on Sunday and started mouthing off about pregnancy and "legitimate rape" -- and then clumsily attempted to make amends by explaining that he just meant "forcible rape" -- he was invoking one of the oldest, most primal and persistent tales in the history of male and female relations. He was reminding us all of the Girl Who Cried Rape.

You know the one. She's a spurned seductress out for revenge against the man who didn't succumb to her wiles. She's a loose woman trying to deflect blame from herself upon an innocent man. She's just plain crazy. She exists in our fiction and, unfortunately, she sometimes exists in the real world, too. She ruins lives; she sends innocent men to jail. And every single time she appears like a recurring nightmare, she is promptly leveraged as an excuse to impugn the credibility of women in general and rape victims in particular.

Statistics on false reporting are conflicting and vary widely, though the FBI puts the number of "unfounded" claims at around 8 percent. Yet the notion that women are all just waking around with a fake rape accusation in their purses, ready to spray some fake rape talk on the nearest unlucky man who crosses their path, endures. It endures because of women like these, both real and imaginary. So the next time you hear some right-wing nutjob wondering whether a pregnancy was "caused by normal relations in a marriage or was it truly caused by a rape," know that this is the playbook they're working off. This is what they're afraid of. And this is what all women pay for the price for.

The wife of Potiphar

She doesn't even get a name in the book of Genesis, but she's notorious nonetheless. She's a lusty lady, like Demi Moore in "Disclosure." And when Joseph spurns her adulterous advances, she promptly accuses him of trying to rape her, saying, "He came in to me to lie with me, and I cried out with a loud voice." For his trouble, Joseph gets thrown in jail.

After deflecting her questions about his marital status during an expedition to the Marabar Caves, "A Passage to India's" Dr. Aziz finds himself accused of an attempted rape, or, as the English like to call it, an "insult." Eventually, Adela admits, "He never actually touched me once."

The plot of Harper Lee's beloved novel "To Kill a Mockingbird" comes from a dark chapter of American history – the lynchings of African-Americans on trumped-up charges of rape and attempted rape. Here, Southern small town lawyer Atticus Finch must defend Tom Robinson from the rape accusation of Mayella Ewell. "That nigger yonder took advantage of me," she says, "an' if you fine fancy gentlemen don't wanta do nothin' about it then you're all yellow stinkin' cowards." Like the wife of Potiphar, Ewell is in fact a failed seductress, one who bears the additional weight of igniting her father's rage. Her lie succeeds -- Robinson is convicted and soon killed.

When the woman who later be known to the world as Jane Roe faced an unplanned pregnancy in 1969, a friend advised that she might obtain an abortion in Texas if she would "just tell the doctor you were raped." As she explained later, "I thought that was a good idea." She soon recanted, but that aspect of her narrative has long been a conservative sticking point in the debate over abortion. On Mike Huckabee's show just this week, Todd Akin cited McCorvey's "false claims like those made in Roe v. Wade," despite the fact that the rape claim wasn't part of the Supreme Court battle. As a later BBC story on the landmark case explained, "Ms. McCorvey's attorney, Sarah Weddington, insists that the rape testimony was not a factor in the Roe verdict."

In 1977, Crowell, fearing she might be pregnant by her boyfriend, told police she had been abducted from a parking lot and raped. Based on a description, police picked up Gary Dotson. Crowell identified him as her attacker and he was convicted. Crowell recanted her story several years later but it wasn't until 1989 that forensic evidence definitively cleared him. For that, he earned a place in the history books as the second person in the U.S. to be exonerated on the basis of DNA evidence.

In 1987, it was an unthinkable crime that became a media sensation – a missing young African-American woman turns up seemingly barely alive, with racial slurs written all over her body. She claimed she had been raped by a group of white men including "a cop," none of whom she could describe. A rape kit provided no evidence of assault, and soon her entire story began to unravel. Despite being allegedly missing for days, there was no compelling evidence of exposure to the elements, and witnesses claimed to have seen her during her supposed abduction. Friends suggested she had run off and then been afraid of retribution from her stepfather, who'd murdered his first wife. In an interview five years ago, she still maintained that she had been raped.

After the two naughty teens in John McNaughton's tawdry, twisty thriller "Wild Things" who set up their hunky schoolteacher on a false rape charge are discredited, he collects a generous settlement. The twist? They were all in on it for the cash.

In 2006, the sometime stripper and escort accused three white Duke lacrosse team members of raping her during a party she'd been hired for at the team captain's house. It seemed at first a harrowing story of violence and racism. In other words, it was Christmas every day for Nancy Grace, who gleefully seized upon the story of the "gang rape." A DNA test did not match any of the players, and Mangum gave numerous contradictory accounts of the events of the evening.  Over a year after the incident, all the charges against the men were dropped. In 2011, Mangum was indicted in the stabbing death of her boyfriend.

Ten years ago, Brian Banks was a high school student with NFL dreams. Then after allegedly briefly fooling around, a classmate accused him of raping her. There was no DNA evidence, but his attorneys persuaded him to enter a plea to get a lighter sentence. He served five years in prison and then had to register as a sex offender. Then last year, Gibbs contacted him via Facebook and asked, "Let's let bygones be bygones." In a secretly videotaped meeting, she admitted, "No, he did not rape me." This past May, his conviction was overturned. At the time, Banks told reporters, "It's been a struggle, it's been a nightmare. It's more than I can describe, the things that I've been through."

Half the characters on "Law and Order: SVU"

You've got imagined memories of molestation. You've got girls falsely accusing their classmates. You've got Chloe Sevginy on a guest episode this past spring, as a scheming fake rape victim. You even get Stabler being wrongly accused of inappropriate behavior. Truly, this show is the mothership of fake rape tropes. Thanks, guys. You're the reason Todd Akin thinks we're all liars.