Are these dinners an opportunity for Obama to connect to his voters or a chance to spin his image as a populist? 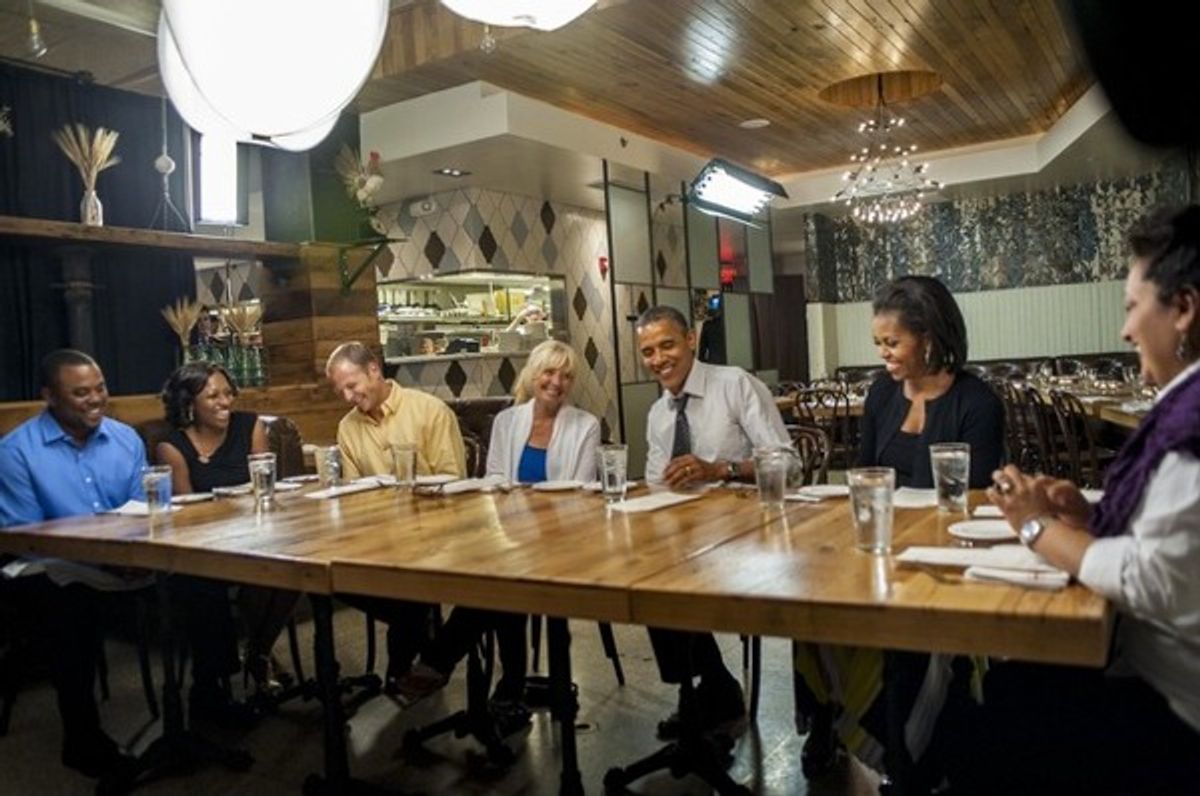 On top of running a fundraising lottery for dinners with the President (I’m sure you’ve been getting Michelle and Barack’s emails), the White House has been prominently using the ensuing sit downs for photo-ops. The latest event took place a few days ago at the Mintwood Place restaurant in D.C.’s Adams Morgan neighborhood. Whereas, on the surface, it’s heartening to see the Obamas hanging with wildfire smoke jumpers and assistant high school principals, as if one of those chairs might be filled (for $25 or so) by you or me, I’m wondering about the larger symbolism.

Isn’t what we’re seeing here, in fact, mostly the product of brilliant marketing, with the president (or Romney) engineering the perception of populism and participation? More seriously, by having people pay for the opportunity, isn’t the campaign also emulating and forcing the public to (literally) buy into the plutocratic game where citizens (those with the real wealth) are expected to pony up to get (the real) attention of elected leaders? Looking at the photo again, how much is the scene a democratic act, a lighthearted strategy for engagement, a concept to say that the little guy helped build the bank, one more reinforcement of the lottery society, and/or a vehicle to model for the American electorate the concept of “pay to play”? And then, I happened to notice this single photo from the evening that the White House happened to publish on Instagram. In contrast to the wire photos presumably taken of the Obamas and the lottery winners before the dinner started, everyone sitting there with a glass of water in front of them, the Instagram shot shows the Obamas in isolation enjoying their meal in what otherwise (there’s no caption) looks like an intimate meal.

Not to make too big a deal out of it, I also wonder what kind of message this snapshot is supposed to communicate, given that the whole point of the event involves the Obamas breaking bread with Joan and Jane Q. Public. (photo 1: Pete Marovich-Pool/Getty Images caption: President Barack Obama and first lady Michelle Obama have dinner with three winners of “Dinner with Barack and Michelle” fundraising contest on August 20, 2012, at Mintwood Place in Washington, D.C. Voters will go to the polls on November 6 to decided if Obama will be re-elected for another four years.)(photo 2: @barackobama / Instagram.)