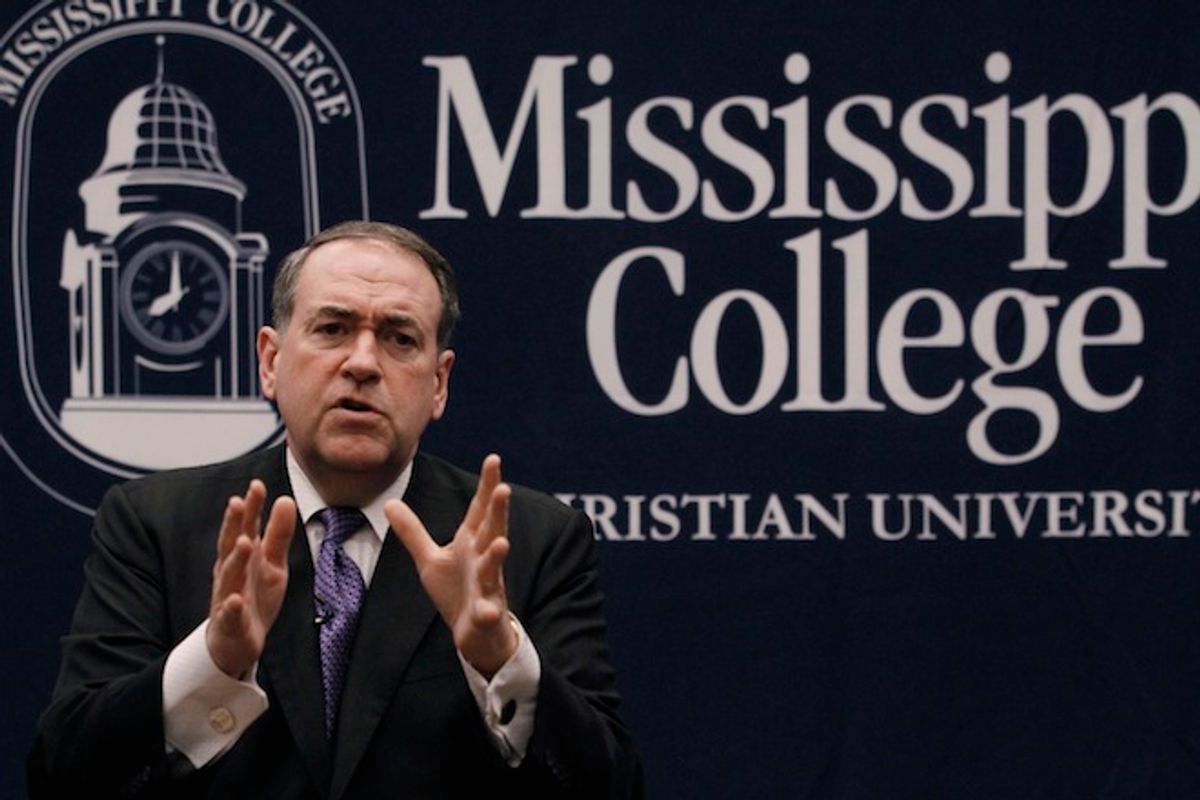 It’s still very possible that Todd Akin won’t be running for the Senate this fall. He still has a month to leave the race and be replaced by a new candidate, provided he can secure approval from a Missouri court -- something that would probably be a formality. He’d also have to pay for the printing of new ballots, another technicality that wouldn’t stand in the way of him exiting, if that’s what he wants.

In other words, Republicans still have good reason to try to isolate Akin, denying him political and financial support and separating themselves from him publicly with the hope that he’ll eventually conclude he’s on a doomed mission. This is why what Mike Huckabee did yesterday afternoon is so unhelpful to his party.

The former Arkansas governor and presidential candidate weighed in with a fiery defense of Akin and a call for pro-life Republicans to defy party leaders and their “sleazy” efforts to force Akin out and “feed his body to the hungry liberal wolves.”

The question of why Huckabee would do this isn’t that hard to figure. For one thing, he was the most (only?) prominent Republican to back Akin in Missouri’s GOP primary earlier this month, a race that Akin won in an upset. Both men are also closely aligned with the Christian right and place an unusual emphasis on moral and cultural issues. Huckabee’s statement, which bemoans that “money has changed hands to push [Akin] off the plank,” also speaks to the grudges that he nurses from his 2008 White House campaign, which he believes was undermined by his party’s professional class and financial elite.

But his strong affirmation of support provides Akin with a crucial lifeline. For one thing, Akin now has a major national Republican leader willing to stand with him and fight back against the party’s isolation campaign. Perhaps more important, Huckabee could also help Akin rake in small donations from rank-and-file Christian conservatives.

As his ’08 experience showed, Huckabee isn’t exactly a fundraising machine, but what Akin needs right now is enough money to tide him over for a month or so – until after the final, more absolute Sept. 25 candidate switch deadline passes. If he’s still in the race at that point and is within striking distance of Claire McCaskill, it’s logical to assume that national Republicans will end their prohibition on supporting him financially. Whether this means the National Republican Senate Committee will begin spending money again or a super PAC will take up the cause is anyone’s guess. But knocking off McCaskill, who until this moment was this year’s most endangered Democratic incumbent, is too important to the GOP’s Senate takeover hopes for the party to sit the race out.

As for Huckabee, he has little to lose with his maneuver. A case can be made that this will enrage GOP leaders and that they’ll remember it if Huckabee runs for president again in 2016. But Huckabee seems to have concluded, correctly, that he’s never going to be the candidate of the GOP’s top fundraisers, operatives and opinion-makers. What he has is a powerful appeal to a very specific (and very big) component of the GOP’s base – grass-roots Christian conservatives. And it’s doubtful he’ll pay a long-term price with them for being loyal to Todd Akin.