"They want to run us to death" 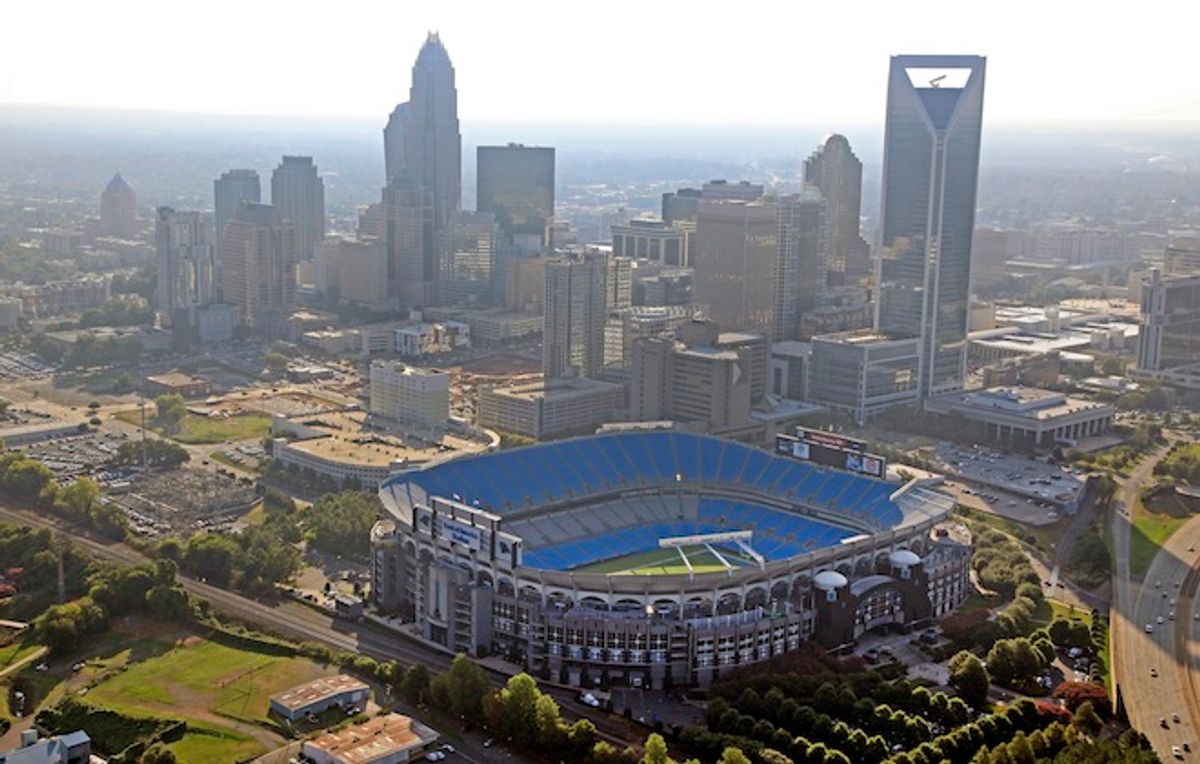 Bank of America Stadium is shown by the skyline of downtown Charlotte, N.C., Thursday, Aug. 16, 2012. The stadium is one of the sites of the Democratic National Convention. The convention starts on Sept. 3, 2012. (AP/Chuck Burton)
--

In two weeks, Democrats will gather in Charlotte, N.C., and pledge once more to strengthen the right of workers to join unions and negotiate with their bosses. But the convention's success depends on the work of the city's sanitation workers, who are banned by law from exercising that right. As the party readies its platform pronouncements, those workers are asking for more concrete help.

Wednesday, leaders of a North Carolina union released a letter appealing to President Obama and the Democratic National Committee for support in their efforts to win union rights. “Despite the added work and dangers for Charlotte City workers in preparation for and in the aftermath of the DNC, and the fact that $50 million in federal funding has been allotted to the City of Charlotte to host the DNC,” the United Electrical, Radio and Machine Workers of America (UE) Local 150 wrote, “the City of Charlotte refuses to address the needs and rights of the City workers.”

“The workers are working like dogs,” said garbage driver Al Locklear, the president of Local 150’s Charlotte chapter. “They want to run us to death.”

UE says that sanitation workers have been working up to 15 hours a day and up to seven days a week due to pre-convention pressures, inadequate staffing and high turnover. Locklear says the mandatory overtime hours are exacerbating already unsafe conditions: When workers point out potential safety issues with the trucks they’re supposed to drive, he alleges, some managers “have told them to take them on out anyway.” Locklear charges that many of the trucks, including the one he drives, also lack working air conditioning: “It is hotter on the inside of that truck than it is on the outside.” “The longer they work, mistakes are made, more accidents happen,” said UE organizer Ashaki Binta.

The restrictions on public workers’ union rights in Charlotte are even greater than those signed into law by Scott Walker in Wisconsin. Some reports on Democrats’ choice of Charlotte for their convention have mentioned North Carolina’s right-to-work law and exceptionally low unionization rate. Fewer have noted that the state is one of only two in the country to ban all levels of government from negotiating any contracts with public employees’ unions, regardless of how many workers support the union (some other states restrict which public employees can bargain collectively, or what they can negotiate over, or bar strikes). The ban “really is a slap in the face to public employees here,” said MaryBe McMillan, the secretary-treasurer of the state AFL-CIO.

Asked about UE’s criticism of Obama, McMillan said, “It would have been helpful if Democratic officials would have been more outspoken about their support for collective bargaining rights for public employees,” including North Carolina officials. “Ultimately, though,” she added, “I mean, President Obama and the DNC can’t change the law here. It’s the voters that can do that … that’s really our focus right now with our members.”

Before agreeing to hold the convention in Charlotte, said Locklear, national Democrats should have said, “You want us to come down, we recognize unions and you don’t. Y’all got to change.” “I don’t understand people like that,” he added. “If they believe in unions and stand for the unions … [why] they don’t say that’s wrong.” Instead, he said, “It’s about money now, regardless who it is.”

UE’s Binta said that the president and the DNC have a responsibility to back the workers’ campaign: “If you’re going to meet here in Charlotte, then you should be respecting the rights of the workers who are on the front line of providing for the Democratic National Convention.”

In 2010, North Carolina’s Democratic Gov. Bev Perdue signed an executive order instituting a procedure for state agencies to “meet and confer” – but not negotiate -- with a public sector union. At the same time, Perdue told the News & Observer, “Employers know I’m against collective bargaining.” (Perdue’s office did not respond to a request for comment.)

In other words, some public sector union members have a venue to raise concerns and make suggestions to management. But they’re still barred from having negotiations or contracts. And while some cities have chosen to institute “meet and confer” with their own employees, others have declined to – including Charlotte.

In the absence of collective bargaining, Local 150 members are still using collective action and advocacy to try to improve their conditions. But absent a union contract, Locklear says that disciplinary rules are unreasonably strict, and often enforced selectively as an excuse to fire activists. “Some of the departments are telling them, you better not get in that union – you can lose your job,” said Locklear. Workers also say they were told by management that they’re not allowed to wear their work uniforms when they appear at City Council to protest about their work conditions.

Overturning North Carolina’s collective bargaining ban would require a new state law, a daunting proposition given Perdue’s resistance and the Republican control of the state House and Senate.  UE’s more immediate goal is to pass a “Municipal Workers Bill of Rights” ordinance through Charlotte’s City Council, which would include “meet and confer,” staffing and safety standards, higher wages and the option for workers who want to pay union dues to have them deducted automatically from their checks.  Under such an ordinance, said Locklear, workers would at least have the opportunity to “sit down and talk with [management] about what’s going on with these trucks” and say, “This is unsafe.”

In Wednesday’s letter, UE leaders “implore” the Obama administration and Democrats to support such a Bill of Rights for Charlotte workers, as well as the overturning of the state ban. UE members have also been holding weekly vigils outside the City Council chambers, and they plan to raise the issue when the council meets on Monday.

The body has a 9-2 Democratic majority. Binta said UE is “close to having a majority” for a narrower ordinance to require “meet and confer” and dues deduction, both of which Charlotte’s city manager has “refused to implement” on his own.  But she said members face “a lot of pressure” from the Chamber of Commerce to oppose even those measures.

Democratic City Council member John Autry told Salon he would support such a bill, because “all work has value, and the people who perform that work are valuable.” Reached over email, Democratic Council member Beth Pickering said, “I support the concerns of our public workers,” including "meet and confer" and dues deduction, but added that the issues “require serious consideration and in-depth analysis.”

In response to Salon’s inquiry to the mayor’s office regarding the union’s safety allegations and proposed Bill of Rights, Charlotte City Attorney Robert Hagemann emailed that the city offers “a fair and competitive compensation and benefits package” and “To the extent that employees will be required to work overtime – and those will be mostly public safety employees – they will be compensated in accordance with the Fair Labor Standards Act.” Hagemann wrote that while bargaining is illegal, the city recognizes “the right of its employees to belong, or not to belong, to a labor union.”

Asked whether anti-union laws should have cost Charlotte the chance to host the DNC, the AFL-CIO’s McMillan said, “I don’t know if I would say Charlotte was the best choice, but from our perspective this convention is giving a lot of union members jobs … that’s also a good thing.” She added that the convention could be “an opportunity for us to highlight the struggles of workers in North Carolina.”

Locklear was less optimistic: “I know it’s going to benefit the city, all this money they’re going to be getting. But us workers, what are we going to get? Nothing but work, work, work.”