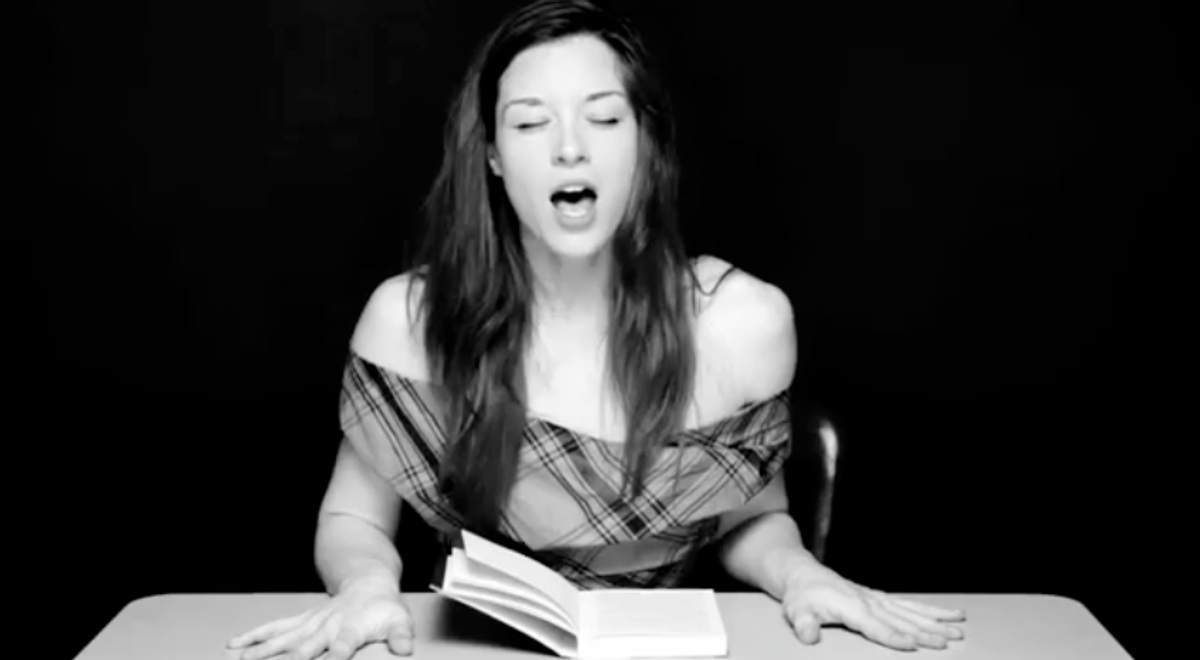 The black-and-white video begins with a woman sitting at a table with a book in front of her. She looks into the camera and states her name, the name of the book, and begins to read. It seems she's overwhelmed by the words -- there's a slight twitch, a smirk, a straightening of the back, a desperate breath in -- and she struggles to continue reading.

Eventually you realize there is more to this scene than it at first seems -- maybe when you notice the ever-so-slight buzzing sound in the background, or maybe not until the moans begin. Either way, before the end of the video there is the unmistakable appearance of an orgasm. But you never see just what has produced it: Is there someone or something under that table? Was it just the words that produced those paroxysms of pleasure?

I talked to Cubitt, also known as Siege, by email about his fascinating new project, the line between high and low art, and authentic portraiture in the age of self-branding.

OK, what exactly is going on under that table?

I won't divulge explicit technique, but the assistant is equipped with a back massager and instructed to distract the reader.

What instructions did you give the readers?

No instructions are given between reader and distracter. Part of the intrigue comes from that tension.

How do you go about selecting the book and the particular passage?

Readers are given full control over what they choose to read. I simply ask them to choose something personally meaningful to them, and something long enough to read from. We've had everything from Walt Whitman to a science book on fungus.

Are the videos you've posted so far first takes? Any entertaining outtakes?

Everything is only one take, straight through, no edits or second takes. I keep filming after the session is over, and often there's a quite interesting conversation about the experience of the sitter, but I have no plans to publish those just yet.

What sorts of things have the readers revealed in those post-reading conversations?

It's quite interesting to hear about what was going through their mind as they started to lose track of what they read and surrendered to their bodies. They talk about it almost like it becomes a religious trance, and they usually have no recollection of the last half of the reading.

Where did the idea for the project come from?

I've long been fascinated with the concept of control and authenticity in portraiture, especially in these modern times of personal branding, Facebook self-portraits and incessant Instagram self-documentation. What is left for the portraitist to reveal? How can we break through to something real? So I've had several projects related to distracting the sitter from their practiced poses into something more akin to reality, albeit an artificially engineered veneer of it.

I've made large-format still image formal portraits of sitters as they tried to maintain eye contact with the camera while being vibrated or tickled. I've made a video series called Long Portraits where subjects were filmed for five minutes or more just looking into the camera.

These are all attempts to see something they're not trying to show me.

This is probably an annoying question, but what's the "artistic vision" behind the series?

The title is a winking reference to the quack Victorian medical theory of "hysteria" in women, and the vibrators and hydrotherapy treatments used to "cure" them. On an individual level, I'm interested in the battle the sitter experiences between mind and body, and how long one retains primacy over the other, and when they reach balance, and when they switch control.

On a larger scale, I'm interested in how society draws a line between high and low art, between acceptable topics of discussion and taboo ones, between what can be worshiped and what must be hidden.

This project touches on all these themes, while also just being really fun to watch.

Have there been times where the reader hasn't climaxed? Any concerns about readers faking it?

I make it very clear to them that it's more about the journey than the destination, and that I'm more interested in the process than any specific result. There should be no judgment in anthropology. Most sessions have lasted between five to eight minutes. A couple have gone to 15 minutes with no orgasm, at which point I end it. I don't know if the longer ones will be published online, as the medium tends to not do well with long watching times.

As for faking, I'm not too concerned with it, and while the process itself can create pressure to "perform" for the camera at first, it seems that the distraction caused by enclosing oneself in a very personal reading selection seems to put every subject at ease, and they often forget about the camera after a couple minutes.

How would you feel about people using these videos as masturbatory material? Do you want the viewer to get turned on?

One of the most unexpected comments I received is that this is erotica for those who self-identify as asexual. I'm not personally opposed to anyone's reaction to my work, as long as they react.

Why did you choose to have the action under the table off-camera?

I'm filming these very demurely, almost clinically aloof, in an attempt to provide a mysterious place for the reveal to happen, without ever having to reveal anything. What's happening is important, but how it's happening is completely irrelevant for my purposes. To show more would be to distract from the core experience.

Do you plan to have any male readers?

I've been thinking about how I might be able to incorporate male, or transgender, readers, but that would present a few distracting aspects. One, they wouldn't have the same conceptual relationship with the historical use of the term "hysteria." Two, I don't think men have quite the same sensual relationship to the written word as women do. Three, I'm not aware of any distracting devices that achieve the same level of abandon on men as they do on women.

But I have researchers conducting experiments presently, and if we achieve a breakthrough, perhaps men are in for it next.