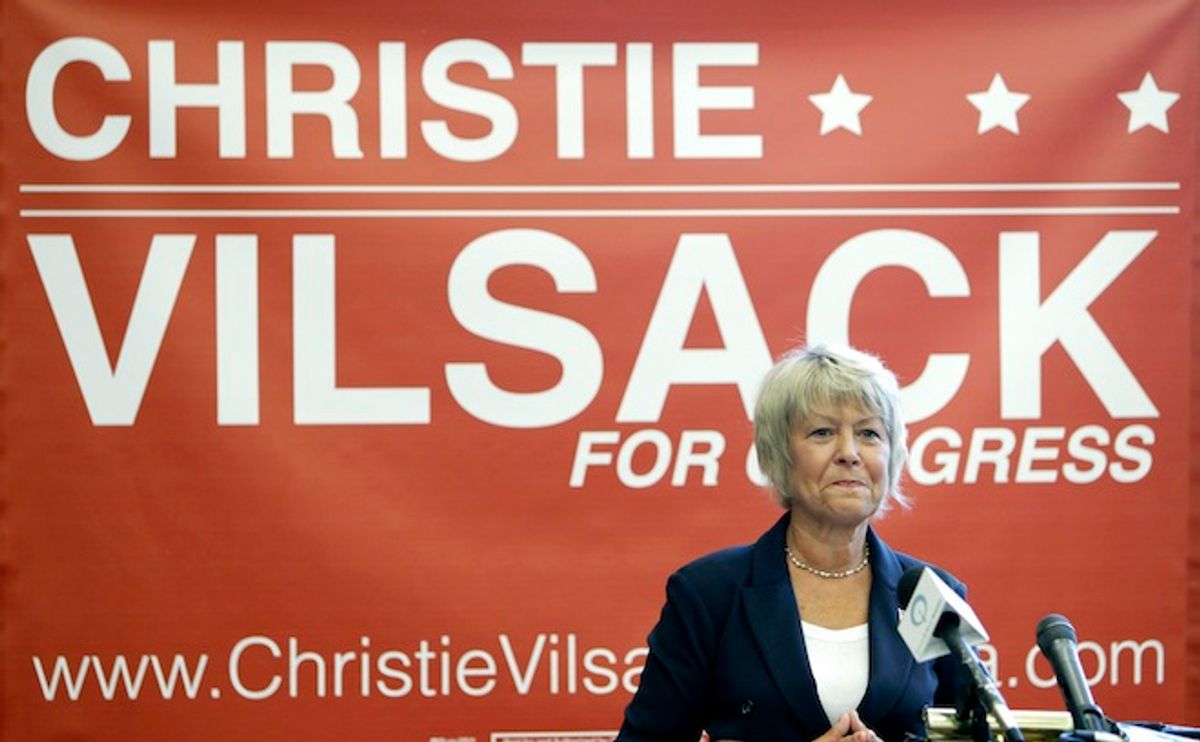 Christie Vilsack has been involved in Iowa politics for years as the wife of Iowa's former governor, who now serves as President Obama's Agriculture Secretary. But now she's hoping to be the officeholder herself, giving controversial Tea Party Rep. Steve King his toughest challenge yet in the newly redrawn 4th Congressional District. The district is more competitive than King's current 5th district, which is being eliminated this year thanks to redistricting. Vilsack tells Salon that voters in the district want someone who can work across the aisle, unlike King, who has an apparently inexhaustible supply of offensive comments.

What’s your message, and why can you win this year?

I’m confident people are going to have a choice for the first time in a long time. This is a democracy, and the most important thing for people is to have choice. People want to turn the focus back locally. This a district of small towns and small cities, and people want to rebuild the economy in these small places so they can raise their children and grandchildren. So we can sensationalize it with a lot of divisive issues, but I think people really want us to articulate our messages. And we’re going to have to appeal to independents, who make up 37 percent of the district.

You mentioned divisive rhetoric. Congressman King has a long record of saying outlandish comments. So far, it hasn’t cost him an election, but do you think this year is different? Are voters fed up with it?

They want people in Congress who will go there and get along in a bipartisan fashion. So, most important to me is that people understand that I’ll bring a different lens, and that I’ll bring a bipartisan lens. And I’ll bring a spirit of cooperation and civility. I’ve been talking about that from the very beginning. I was at the Greene County fair the other day and this man talked to me for 20 minutes. He said, "You know, I’m not a Democrat and I’m not a Republican, I’m an American and I wish Congress would start acting like they’re Americans, too." Another woman approached me at a parade and asked, "Are you an incumbent?" I said, "No," and then she said, "Well, then I’m for you."

So people are tired, I mean really tired, of the partisan bickering. It’d be one thing if Congress was getting something done, but they’ve done really nothing. They didn’t even pass a farm bill, which is the most important bill for helping rural areas. No infrastructure bills, no long-term transportation bill, no -- I’m an educator -- no education bill. There’s no comprehensive immigration bill.

You would be the first the woman elected to Congress from Iowa, is that right?

Iowa has never elected a woman to the governor’s office, to the House or to the Senate. We’re one of two states, Mississippi and Iowa. We’ve tried! A few months ago, we celebrated the fifteen women who tried at one of those levels and did not succeed. So I’m giving it another try.

Congressman King has a big national profile, so I think a lot of Tea Party people are looking at this race and also a lot of Democrats who know Steve King as the face of the Tea Party. So what’s the national significance?

Well, I think that’s his base. But in this district, you need more than your base. Neither of us can with with our base. With 36 or 37 percent independent, you have to appeal to those independents. So I think that’s where I win. I’m a practical, down-to-earth, small-town Iowan, and I see things through a practical lens. I think we need to define what it means to be a congressperson. It used to be about bringing money or earmarks to your district. And I’m trying to define the job as making sure that it's a partnership with the people so we can find ways to create jobs and solve our economic problems creatively. And that demands we work in a bipartisan fashion. I grew up in a Republican small town, and we didn’t pay attention to those things. Around elections, you work for your party and you work for your candidate, and afterward, you go back to getting along with people.

What are your biggest challenges?

I think my biggest challenge is getting people to pay attention! There are so many messages out there, so it’s hard to break through. They’ve known me one way for a long time, but now I need them to understand that I want to be a different kind of congressperson. Because it doesn’t do you any good to send the same people back to Washington and expect different results.