Every year, pundits bemoan the irrelevance of the major parties' political conventions. Here's why conventions rule 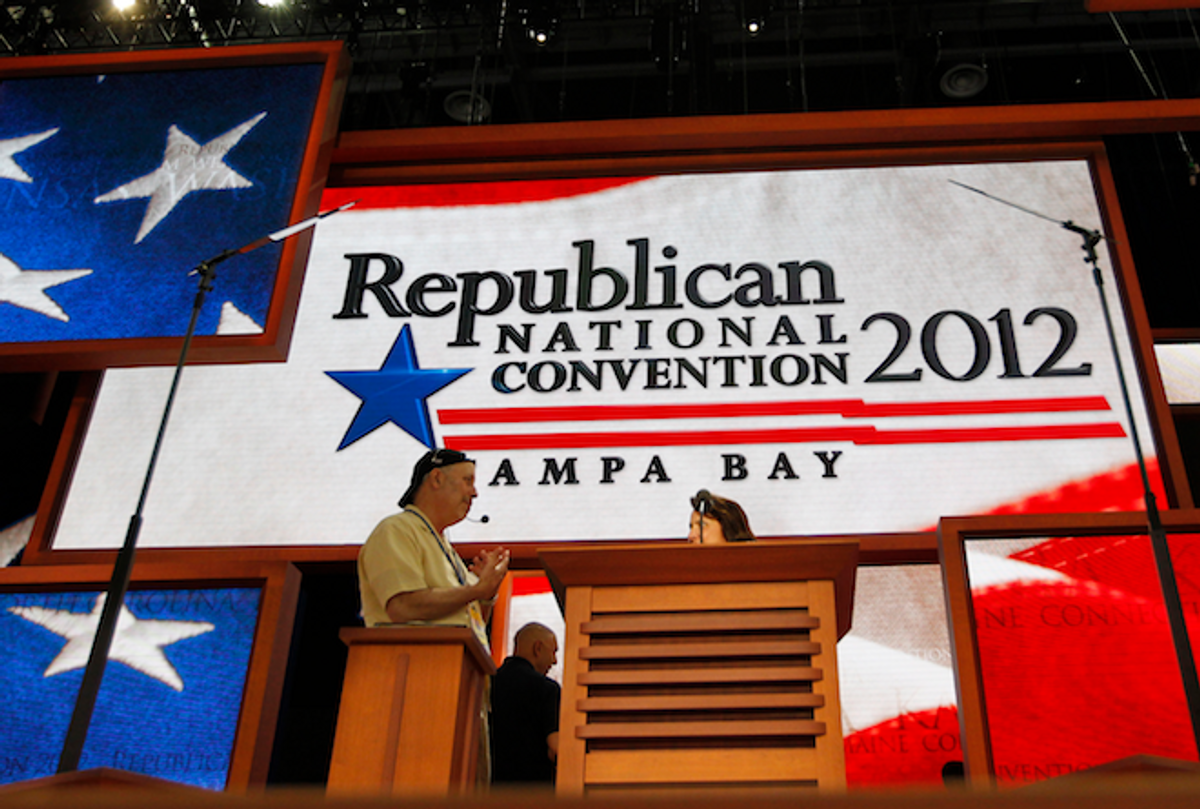 Workers continue the construction of the main stage in advance of the Republican National Convention in Tampa, Fla., Thursday, August 23, 2012. (AP/J. David Ake)
--

Political conventions reigned for a long time. From the 1830s through 1968 they, very basically, chose our presidents. The conventions were meetings of the representatives of state and local parties, and they would compete and coordinate over candidates and policies, ending up with a ticket and a set of deals they could all live with. Sometimes they were brilliant — for example, the Republican convention that chose Abe Lincoln or the Democratic convention that chose Franklin Delano Roosevelt. Sometimes, they were train wrecks — such as the 1924 Democratic convention, which took over two weeks and 103 ballots to find a nominee.

The Democratic Party's reforms after its disastrous 1968 convention — a convention that took a divided party and hardened the divisions — changed all that. Modern conventions aren’t decision-making events, as everyone knows. The delegates, who now represent the candidates more than their state and local parties, are there mostly as props and extras for a television extravaganza. And since the broadcast networks have largely lost interest, you have the equivalent of a Cecil B. DeMille–style cast of thousands for a production that’s only going to play, at best, in a handful of theaters.

Yes, the parties do conduct some business at conventions, including ratifying a party platform and voting on any changes to party rules and, oh yeah, formally nominating the presidential candidate and a running mate. But the truth is that none of that has to happen in conjunction with an enormous gathering of delegates in a large arena with four days of podium speeches and efforts to find something interesting for TV to take the place of boring podium speeches.

So should the parties just give up the ghost and let these institutions die a dignified death?

First of all, while they’re not busy being extras, the delegates (and the alternates, and the rest of the crowd) use the party conventions in the same way that every organization uses their national meetings: to network, to spend time with old friends, to scare up a little business, to work rooms on behalf of themselves or their causes. That’s a useful function, and one that probably pays off for the parties in the long run by strengthening the ties within the party network. Indeed, while advances in communications policy have made in-person meetings unnecessary for making collective choices, the growth of true national political parties – something that hardly existed for most of the United States' political history – has made in-person meetings, in some ways, even more important than they were in the 19th century. So while there’s no particular reason to tie it to the formal nomination of a party's and other party business, if the conventions were cancelled, someone would have to re-invent the meet-and-greet portion of it.

The second reason that the conventions are worth saving is that they still seem to do a good job of transmitting information from the parties to the relatively less attentive rank-and-file voters. Conventions almost certainly do very little persuading. Most often, partisans watch their own convention and tune out the other one. (These days it’s incredibly easy to do so; it’s not like the 1960s and 1970s when you “had” to watch anything that was on four out of the five TV channels you likely had access to.) Most who do watch the other party’s convention do it with strong defenses against the messages they hear – and remember, most of those who say that they are independents are really solid partisans, whether they realize it or not; they "just happen" to always like most of the candidates from one party and "just happen" to find everything the other party says to be a pack of lies trotted out by shockingly annoying speakers. But there are lots of these relatively low-information voters who use the conventions to refresh their knowledge of what their own party stands for and against these days and to get to know the candidates, if it isn’t the incumbent president and vice-president. You’re going to see plenty of material introducing Mitt Romney and Paul Ryan in Tampa. For anyone who frequently reads political columns in Salon, it's going to seem like very old news indeed, but lots of Americans – lots of Republicans, even – don’t really know much about Romney and Ryan. And the conventions are not only a good place to learn more but also a cue that it’s time to start paying attention to politics again.

But really, the reason I think that the conventions are worth saving is because both a democracy and its political parties need rituals, and we really don’t have that many left. Indeed, the rise of the parties over the last 30 or 40 years has been accompanied not by renewed and updated rituals but by a political culture that continues to demand we vote the person and not the party and which considers independent voters to be superior to partisans. Against that, the funny hats, the balloon drops, the roll call of the states and the rest of it aren’t much … but at least they’re something. Until someone can come up with good 21st century customs and rituals appropriate to our modern parties, I’m all for hanging on to what we have – and so I’m very glad that the conventions have survived 40 years after their original political function was stripped from them.