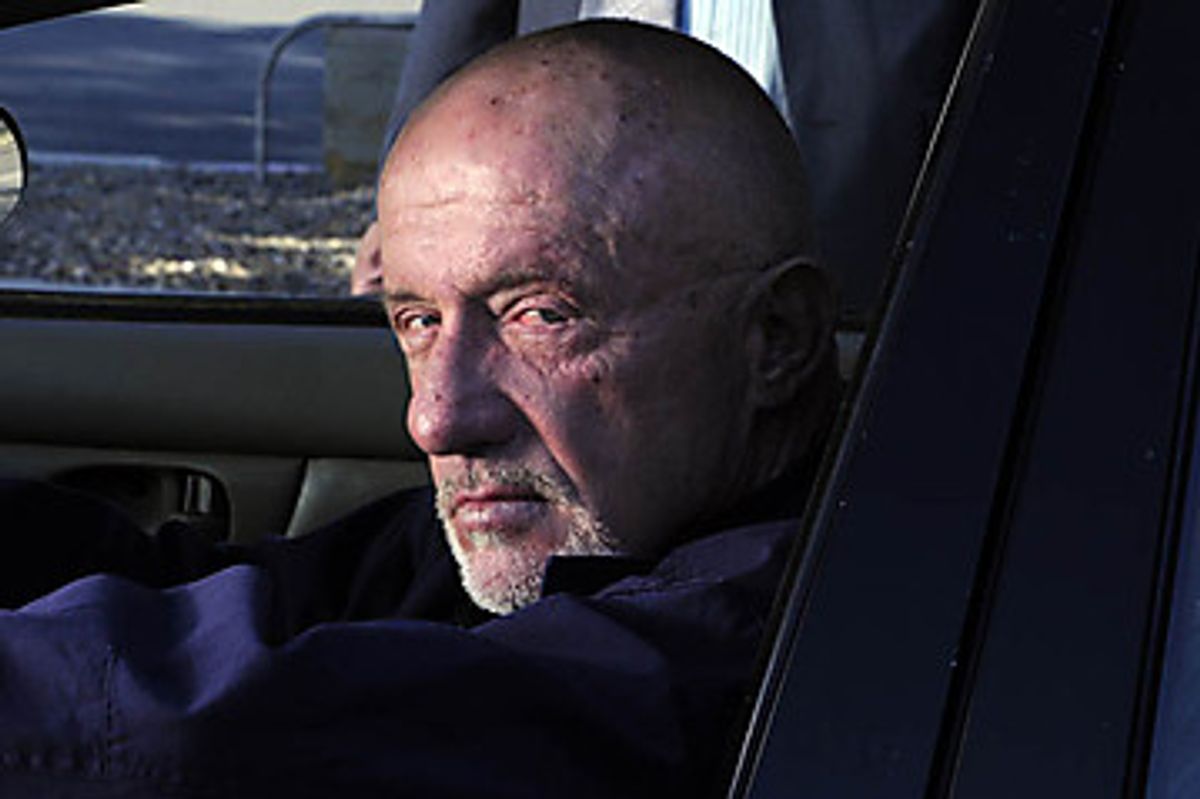 In the second episode of "Breaking Bad" this season, Mike Ehrmantraut explained to Walter White why he had no interest in getting back into the meth business with him: “You are trouble … A time bomb. Tick-tick-ticking. And I have no intention of being around for the boom." Well, after last night’s episode we know Mike won’t be around for the boom, but only because he was around for a pop. Poor Mike, who knew the fate barreling toward him, and still wasn’t able to swerve out of the way.

Last night’s episode, the penultimate episode of the series’ penultimate season, was suffused with a feeling of inexorability. As the episode closed in around Mike, the outcome took on a preordained feeling that precluded surprise. Unlike with Gus Fring’s death, which was a shock in almost every particular, by the time Walt and Mike were meeting at the river the proceedings had the stench of tragedy, that feeling one gets when reading “Romeo and Juliet” and — even knowing what is about to happen — begins to hope that this time, maybe somehow, Friar John will get to Romeo in time. He never does.

On Twitter last night, AV Club's Todd Van Der Werf  explained some of the reasons that he didn’t love the episode, namely that a lot of things just happened. There were plenty of coincidences. Hank just decided to have the cops trail Mike’s lawyer, which paid immediate, speedy dividends. Walt just happened to be in Hank’s office in time to overhear the news that the lawyer had flipped. And then, in his desperation, Mike agreed to let Walt, and not Jesse, bring him his to-go bag. Mike may be eager — or as eager as Mike can be — for Jesse to actually get out from under Walt’s thumb, and perhaps this is why he didn’t want Jesse to bring the bag (or he didn’t have enough faith in Jesse’s abilities), but it doesn’t quite make sense that he would let Walt do it instead. Mike hates Walt. Walt hates Mike. I’ve been expecting Walt to kill Mike all season, and Mike has an uncanny sense of who is out to get him. He would know better.

But all of these plot details, coincidences and judgment errors did begin to accrue in the way that I suspect they were supposed to: They started to feel like destiny. Mike had prophesied this ending himself.  By the time Mike, Walt, Walt’s enormous ego and a gun were meeting in the final scene, the outcome seemed fated. (Every moment was framed so as to highlight this tension, like when Mike leaned across Walt to grab the bag, opening his belly up to whatever Walt might want to do.) And not just by Walt’s character, but by Mike’s as well. Mike was so furious at Walt, so outraged and so constitutionally incapable of letting these faults go unnoted, he fiddled with the time bomb.

In their final confrontation, Mike spelled out the defects of Walt’s character. “We had a good thing, you stupid son of a bitch, we had Fring," he said. "You could have shut your mouth and cooked and made as much money as you would have ever needed. But no, you just had to blow it up. You and your pride and your ego, you just had to be the man. If you’d done your job, known your place, we’d all be fine right now.” Mike was right — so, so right — about Walt, but anyone as aware of Walt’s makeup as Mike, aware of his grotesque quantities of ego and pride, his total shuddering hatred of "his place," should know better than to call him on it.

And so Walt, worked into a frenzy by Mike’s true words, shot Mike in the gut. To me, the most false thing about the episode was Walt’s surprise at having done so. He was dazed and out of it, apologetic even, as the two men stood and sat by the river — the similarities in their features highlighted — waiting for Mike to die. But Walt had taken the gun from the bag to begin with, he’d asked for the names of the nine guys in prison and not, as Mike pointed out, to pay them. Walt’s actions may have momentarily surprised himself, but they didn’t surprise me. Walt will be over it soon (by next week, if you trust "scenes from"). The death of Mike — smart, responsible, resilient, trenchant, likable, dedicated grandpa Mike — is just the beginning.