Largely shut out from the main convention, Ron Paul's fans threw their own party -- and conspiracy was in the air 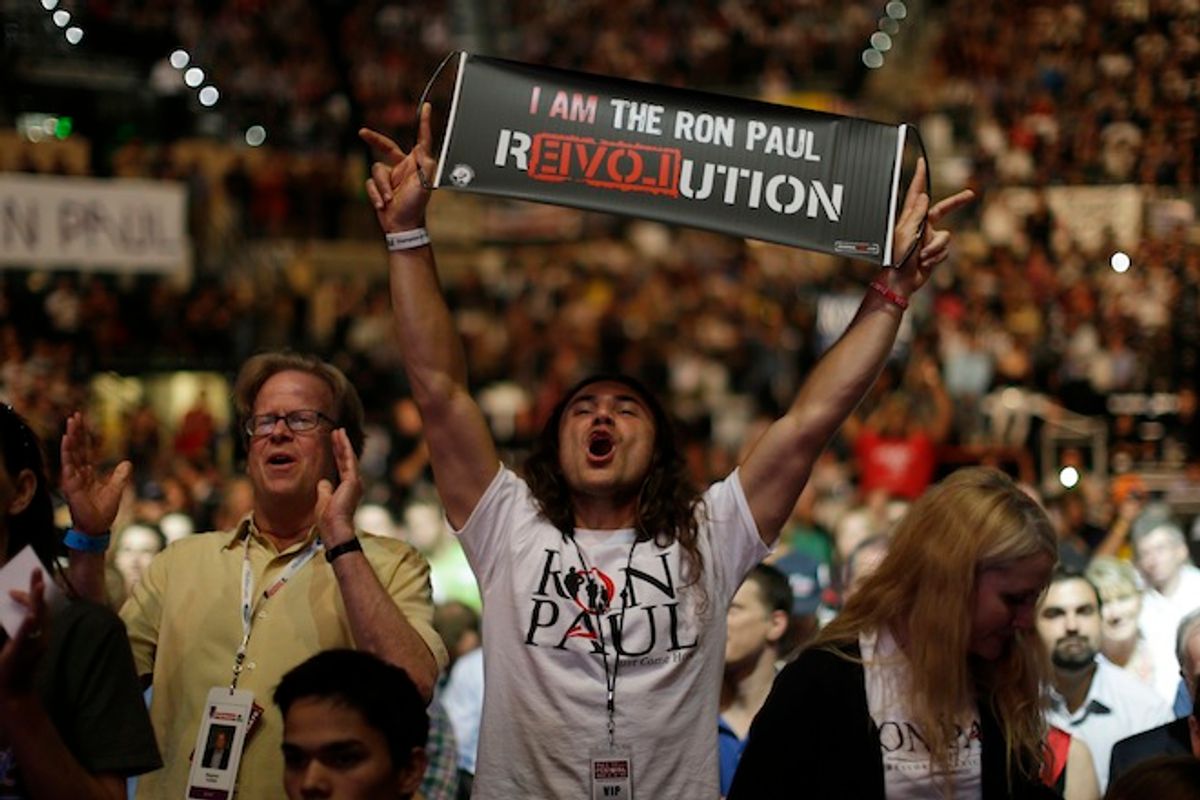 A father-and-son duo from Oklahoma ambled around the “PaulFest” counter-convention Saturday, held at Florida State Fairgrounds on the outskirts of Tampa. Both men had sought to become official Paul delegates to the Republican National Convention this week, but only one ultimately succeeded. The younger, Adam Bates -- a graduate of Michigan Law School and former intern at the CATO Institute -- reported being thwarted by “establishment” GOP types at the Oklahoma state convention in May, when delegates were apportioned. “These Republicans can’t even follow the rules that they wrote for themselves!” he cried. “Oklahoma had a shadow convention out in the parking lot, because they turned the lights out and locked the doors. So I was elected at the one in the parking lot.”

Needless to say, the Republican National Committee did not recognize the legitimacy of said election. “Especially because this is a Ron Paul crowd, the prevailing sentiment is, we’re big on following the Constitution -- the rule of law,” Bates continued. “Not drone assassinations of American citizens, not undeclared wars ...”

His dad, John, was more fortunate. As a duly elected delegate, he’ll enjoy full access to the convention floor come Tuesday. “I think there is a great deal of pent-up resentment about how the delegates have been treated, about how the Republican Party has flouted their own rules,” John told me. “These are their rules. Dr. Paul’s people learned how to work with the rules that were in place.”

“I think you’ll see a lot of ruckus on the convention floor,” he predicted.

Conspicuously absent from PaulFest was the congressman himself, who opted instead to convene an officially sanctioned event on Sunday at the University of South Florida Sun Dome. “Do I wish he were here? Heck, yeah. But I think Dr. Paul and his staff -- any time a candidate is involved in something, they’ll want to have control over it,” the elder Bates reasoned. “I mean, you have John Birchers here, you have lots of different folks.”

At that very moment, a woman rolled past us pushing a baby stroller with a large Confederate flag. “Maybe that’s why Ron didn’t show up?” I suggested. “Could be,” Bates chuckled.

Flummoxed, I managed to track down the woman, Mrs. Felicia Joscelyn of the Pensacola area. Her family were advocates of states’ rights, she said, not subjugation of blacks. “The right to be left alone. Constitutionalism; the right to secede,” Joscelyn posited. “It’s not a racist thing. But people ask about that all the time.”

Despite the Confederate flag looming overhead, the 5-and-a-half-month-old baby herself was irresistibly adorable; she wore a homemade “Got Raw Milk?” one-piece and enjoyed my peek-a-boo-esque antics, making silly faces and giggling effusively. Her name was Hadassa, after the Hebrew name for Queen Esther (“Hardly anyone seems to read that part of the Bible!” the mother exclaimed).

I moved on, purchasing a “graphic coloring novel” titled “We Shall Never Forget 9/11: The Kids’ Book of Freedom” for $5. Nearby, Libertarian Party presidential candidate Gary Johnson, the former New Mexico governor, entertained a scrum of reporters and assorted festival-goers. One man who said he’d recently attended a protest outside the infamous Bohemian Grove resort in Northern California approached Johnson and posed a question.

“If you had something to say to the Occupy groups and the libertarian movement,” the man asked, “do you think there’s an opportunity for both groups to come together?”

“Totally,” Johnson replied. “The country’s up for sale. Both parties are selling it, selling loopholes. Individual groups and corporations are buying those loopholes. That’s the Occupy rub, and I agree with that completely. It’s unfair. So in my opinion, enacting the fair tax, abolishing income tax, corporate tax and the IRS levels the playing field for everybody. And what governments can do, in my opinion, is create a level playing field. That’s something that doesn’t exist today. It’s crony capitalism today.”

“Gary, I love you, dude,” the man said, satisfied, giving the governor a big bear hug. I then weaseled into position to ask my own question. How did Johnson reconcile two divergent narratives about Barack Obama’s presidency -- that he has been a painfully disappointing centrist, according to the left, and that he is bringing about tyranny of an unrivaled order, according to the right?

“There has been more overreach by government than perhaps at any other time,” he affirmed. “And crony capitalism is alive and well. Three things that Obama -- well, first of all, he said a lot of things that I thought were favorable during the last election cycle. But three things stand out for me: gay rights, ending the wars and ending the Drug War. None of those things have happened. So government overreach in the economy is at new levels. I think he’s been really poor on civil liberties, and I think he’s been really horrible on dollars and cents.”

And how was Johnson faring in terms of ballot access? “It’s entrenched interests, and it’s really, really hard to be on the ballot in all 50 states,” he said. “The fact that we’re gonna do that, I think, speaks volumes to this movement. The inspiration I take from Ralph Nader is that he was out there and he talked about an agenda that -- although we might not agree -- I applaud anybody who stands up for what they believe in.”

As John Bates told me, I discovered, there were in fact representatives from the John Birch Society on hand. From their booth, Paulites could obtain literature with titles ranging from “Support Your Local Police! And Keep Them Independent” (probably sensible!) to “How Does Agenda 21 Affect You?” (not so much). The latter is a truly bizarre conspiracy theory about world government that has migrated from the margins of right-wing deviantism into the official GOP platform.

I asked Michael Smart, southern field director for the JBS, what kind of reception he’d encountered among the young people at PaulFest.

“You know, I’ve been quite surprised,” he said. “What I’ve been telling people is, for 50-plus years, the John Birch Society has been espousing the things that everybody’s worried about right now. Over the years we’ve been slandered or this, that and the other, just like Ron Paul has been, just like people are being slandered now as extremist for merely defending the traditions of the country: a limited government, et cetera, et cetera. So it’s been kind of refreshing to see so many young people interested in these sorts of things.”

I asked Smart how he might rebut allegations that the JBS are no more than peddlers of conspiracy theories.

“I don’t rebut it, because the allegation is true,” he said. “We believe that there is a conspiracy out there that’s pushing us toward a New World Order. So that’s not anything we would ever deny, nor have we ever denied. If people think they’re slandering us by that, well -- I don’t think so.”

Dan Johnson, a 19-year-old from Bowling Green, Ohio, was manning a PaulFest table on behalf of the organization he co-founded: PANDA, or People Against the National Defense Authorization Act. Johnson is a political science major at Bowling Green State, and made advance arrangements with his professors to miss the first few classes of the new fall semester. He works eight to 10 hours a day for PANDA. “In America, why would I own a business,” Johnson asked me, justifying his mission, “or why would I work to own a business if I’m not free? Liberty is more important than money.”

In a December 2011 appearance on the Alex Jones show, Ron Paul declared the NDAA was no less than a harbinger of martial law. So naturally, “reception here has been amazing,” Johnson reported, “compared to Tea Party events. It’s a left, right, middle, upside down issue, whatever.

As I departed the PaulFest, it occurred to me that I’d spoken with very few females, not out of conscious choice, but simply by virtue of their being vastly outnumbered (this is quite often the case at libertarian functions). So I approached a pair of young ladies wearing garish Ron Paul tops. They’d flown in from Merrimack, N.H. solely to attend the various Paul-related RNC preludes. “I’m one of those basement YouTuber Ron Paul fans where I’m totally introverted. So this is my first coming out!” said Ashlee Bustead, whose parents had underwritten the trip as a 19th birthday present. She was first drawn to Paul after watching him speak on foreign policy during a 2012 GOP primary debate.

“That’s when I was like, wow, this guy is really resonating with me,” Bustead recalled. “And I’ve never had that happen before. All my friends were really into Obama, and I never was. I don’t see him as real hope or real change. I mean, he threw those words out there, but there was no substance behind them. That was frustrating.”

So she recruited a friend to come along, and here they were. In Tampa, at PaulFest. “Tomorrow’s the first time I’ll be seeing Ron Paul,” Bustead said. “I’m probably gonna cry.”